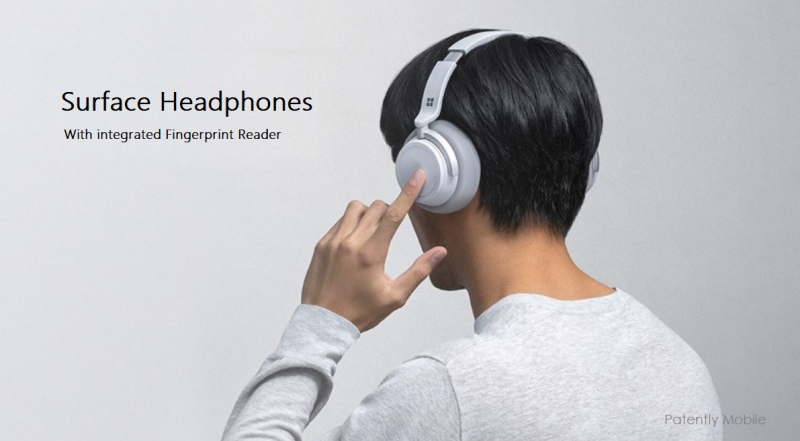 Apple was granted a patent for their upcoming over-ear headphones in February for touch controls on the exterior of the ear-cups as noted in the patent figure below. Apple updated that invention earlier this month in order to better secure the technology and it was revealed just yesterday that the headphones are likely to be made in Vietnam instead of China, just in case the political winds between the U.S. and China grow colder.

As the excitement grows for the first-to-market Apple-branded over-ear headphones, a new patent from Microsoft has surfaced at the U.S. Patent Office today that demonstrates that they're thinking of adding a new convenience feature to their Surface Headphones that might be appreciated by their fan base.

Today the US Patent & Trademark Office published a patent application from Microsoft that relates to adding a fingerprint reader to a future version of Surface Headphones.

Headset nowadays, as an essential audio input/output (I/O) accessory for majority of electronic devices, provides a possible platform to accommodate the fingerprint authentication module or integrate the fingerprint authentication function. This enables a single user to listen to an audio source privately, and meanwhile login his/her account or device in a secured way.

Implementations of the subject matter described herein provide a "dual-mode" headset that is equipped with a fingerprint authentication apparatus. The headset can be coupled to an electronic device, such as personal computers (PCs) and tablets, and functions as a typical audio accessory to receive sound.

In addition, by means of the associated fingerprint authentication apparatus, the headset also facilitates the user to log in his/her own account on that device.

While patent FIG. 1 below illustrates Surface headphones with a wired connection, Microsoft is quick to point out that wireless connections such as Bluetooth, Wi-Fi, or optical communication are also possible.

In use with their wireless Surface Headphones, Microsoft notes that "the fingerprint reader (#120) could be an integrated or embedded component in the headphones. Microsoft originally filed for this patent back in Q4 2019. The U.S. Patent Office published it earlier this morning.

In the big picture, Microsoft has tried to challenge the iPad and failed. They've tried to challenge the MacBook Pro with their high-end Surface Book 3 and that failed. They're now trying to take on Apple's wildly successful AirPods Pro with their new Surface Earbuds that that hasn't been connecting with many. And although Microsoft got the leap on Apple with over-ear headphones, once Apple introduces their first branded headphones, there's likely a chance that Apple will outsell Surface Headphones by a massive multiple in a single quarter.

While it's always good to have a competitor to keep Apple's product teams sharp, Microsoft keeps pushing their hardware teams hard under Panos Panay. They're convinced that one magical day they will finally beat Apple, no, humiliate Apple, just as they were humiliated during Apple's decade long iDevice revolution.

While Microsoft is growing leaps and bounds of late due to their Azure services, their hardware division has yet to make a dent against their nemesis, Apple.