There's been a lot disappointment with Google being unable or unwilling to launch the ever-secret 'Pixel Watch.' Google's Watch partners like Fossil and Huawei that are using their Wear OS are probably pushing Google to stay out of the market. Though with Pixel Phone in the market, it stands to reason why a Pixel Watch is likely to arise in the future. Back in April 2019 we posted a report titled "Google wins Patent for Watch Band Mechanisms for a Possible Pixel Watch that could compete with Apple Watch."

This week the U.S. Patent Office published a Google patent application relating to either their own branded Pixel Watch or at least a new feature for their Wear OS.

Apple, the global leader in the Smartwatch market, has been been working on developing a series of hand-gestures that could be used to execute certain functionality of the watch since 2016 (01, 02, 03, 04, 05 & 06). At the moment Apple is focusing on delivery more features on the health front while keeping the hand-gesturing project active.

When it comes to hand-gesturing, Google has already beat Apple to market with that feature when they introduced their Soli project technology that debuted on their Pixel 4 smartphone calling it Motions Sense. Patently Apple has covered two previous patent indicating what could be coming to Motion Sense in the future (01 and 02).  Of course at the moment, even die-hard Android news site Androidauthority was honest enough to say it a pure gimmick.  Perhaps version two of the technology will actually deliver something useful for Motion Sensing.

With that said, Google's latest patent application clearly shows us in their patent figures below that their engineering teams are working to bring hand-gesturing to their future Pixel Watch or at least add this as a feature to Wear OS for others to adopt.

Overall, Google's invention provides for an optical sensor embedded into a watch chassis of a future smartwatch, with an algorithm to sense gestures from movements of the user's fingers, wrist, and/or arm on the arm that is wearing the watch.

For example, a photoplethysmogram (PPG) signal is used to detect specific physical movements/articulations of the fingers/arm/wrist, which are analyzed as gestures that invoke an action on the watch.

Raw sensor data from the photodiode is read and processed to reduce noise. Features in the processed data are identified, wherein such features correspond to movements of the wrist, hand, or fingers. A gesture detection algorithm matches these features, and potentially other signals, to a specific gestural action. An interface action is performed on the device that corresponds to the gestural action.

The raw sensor data may be read through an analogue-to-digital converter (ADC) to quantize the signal so that it can be digitally processed. This signal is then filtered for noise as a preprocessing stage. In some examples, some of this filtering may be performed on the analogue signal before the ADC.

In Google's patent FIG. 1 below we're able to see a "hold" gesture illustrated, where the user clenches a first and keeps the fist closed. This may be used to, for example, activate a feature of the smartwatch, such as an assistant, a dictation application, a display of particular information, etc; Google's patent FIG. 2 illustrates a "release" gesture, where the user releases the fist. This may be used to, for example, dismiss a feature activated by the "hold" of FIG. 1. 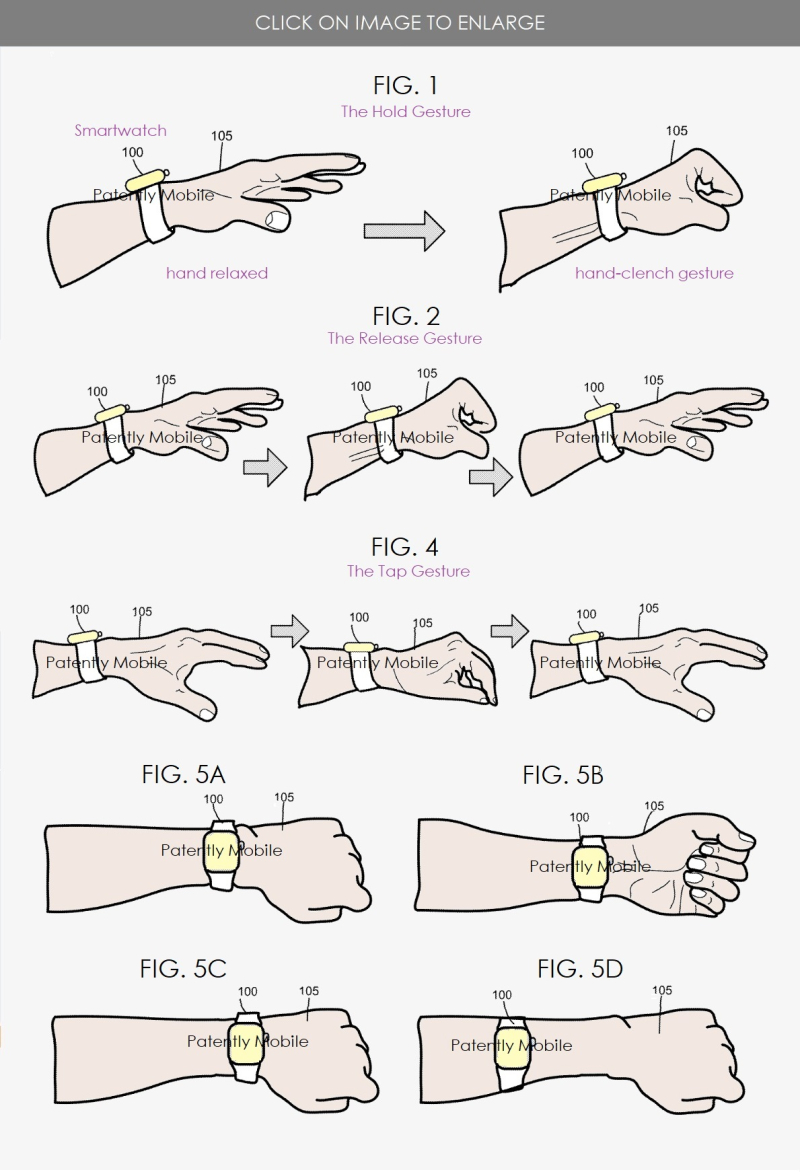 Google's patent FIG. 4 above illustrates a "tap" gesture, where the user taps one or more fingers with the thumb. The tap may be performed one or more times, for example, with different numbers of taps corresponding to different functions. Each different combination may correspond to a different function. Just some examples of functions activated by the "tap" gesture may also include activation or deactivation of triggers, or any of a number of other features.

Google's patent application was filed in January 2019 and published last week by the U.S. Patent Office. Considering that it's a patent application, it's unknown at this time when features, such as those outlined in this patent report will make it to market.