Home Archives Contact Us Subscribe Twitter Facebook MeWe Patently Mobile
Microsoft has Invented a Future version of 'Surface Headphones' with an integrated Fingerprint Reader
Scott Forstall's interview at Code Break 9.0 revealed why education was so important to him & his first meeting with Steve Jobs

As Spotify Stirs up the Podcast market by signing on the Joe Rogan show for $100 Million dollars, Apple now Seeks new Podcast Executives 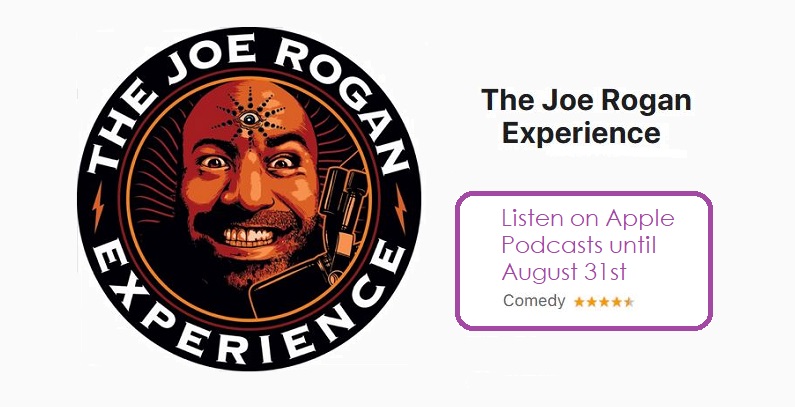 On February 5th Patently Apple posted a report titled "Spotify revealed a Huge revenue miss for Q4 2019 but tried to Dazzle Wall Street with big Podcast Market News," and then followed-up the day after with a second report titled "Spotify, the Streaming Music Champ Worldwide, now Seeks to Get into Apple's Face with new Podcast Services." Weeks earlier we had reported on Apple looking into  making podcasts with various producers of Apple TV+ series.

While many paid little attention to Spotify's move into greatly expanding into Podcasting, it really only hit home when the news of Spotify licensing the Joe Rogan Show for $100 million was announced this week. His show will be leaving Apple's iTunes on August 31st and be an exclusive show for Spotify beginning on September first.

I personally never even heard of The Joe Rogan show before. It was evident after a quick look at his show that Rogan had a balanced approach to interviewing his guests that wildly varied from Democratic Party Presidential runner Tulsi Gabbard through to Roseanne Barr. No judgement, no regular political hackery or cheap shots. No, Rogan rolled with the interview always looking to keep the conversation interesting, as it should be. In an era of political correctness, I found his show refreshingly honest.

Having Rogan say goodbye to iTunes and hello to Spotify was a no-brainer when we're talking about a $100 million dollar deal. In a flash, we're now able to see just how serious Spotify is taking their new Podcast war with Apple.

We're now learning this afternoon that Apple is ramping up its push into original podcasts by seeking an executive to lead the initiative and buying shows that would be exclusive to its services.

The company began acquiring two types of original podcasts, according to people familiar with the matter: one category is audio spinoffs of existing movies and programs on its Apple TV+ service, and the other is original programs that could eventually be adapted into future TV+ video content.

The company is seeking a leader for its original podcast work who would report to Ben Cave, its head of podcasting, said the people, who asked not to be identified because the effort isn’t yet public.

The move should help Apple promote its fledgling TV+ service, as well as defend the company against Spotify Technology SA’s aggressive move into podcasts. While Apple remains the dominant distributor of such programs in the U.S., Spotify has invested hundreds of millions of dollars in studios and original shows. The company, already the world’s leading paid music streamer, has boosted its share of podcast listening.

Bloomberg's report notes that "About 37 per cent of U.S. adults listen to podcasts on a monthly basis, according to Edison Research, but the industry still generates less than $1 billion in advertising sales.

Though the popularity of podcasts has surged in recent years, they’re suffering a hiccup during the pandemic. Many people listen to the shows during their commutes, and with so many people in lockdown, use has declined, according to Podtrac." For more on this, read the full Bloomberg report.

Spotify came out of nowhere to take on iTunes and has since won – even though the company isn't making money and has a huge base of customers on a free tier. It's like the argument of volume shipments in smartphones versus who's making the most Profits and that's still Apple over any Chinese OEM by far.

Yet to be fair, shaking up the market like Spotify has done, excites the market and creates deep rivalries which in turn pushes up demand. The gigantic PR job Spotify did by acquiring the "Joe Rogan Experience" show in the last few days has put podcasts back on my radar screen and I suspect many other consumers as well.

Spotify pushed Apple to acquire "Beats" at a crazy high price in order to get into the music streaming business brought on by Spotify. While I'm not a fan of Spotify, nor its CEO, I do somewhat appreciate the energy that Daniel Ek brings to the table, even if he's using European Politicians to try and break Apple's business model.

Whether Apple views Spotify as pesty gnat or a worthy competitor is unknown at this time.

If you've never tuned into the Joe Rogan show, then you can still catch his original lineup of Podcasts here until the end of August. If you missed the news of the Spotify deal, then you can read up on it by reading one of the reports linked to below:

03: Who is Joe Rogan, the man who just scored a reported $100 million deal with Spotify?