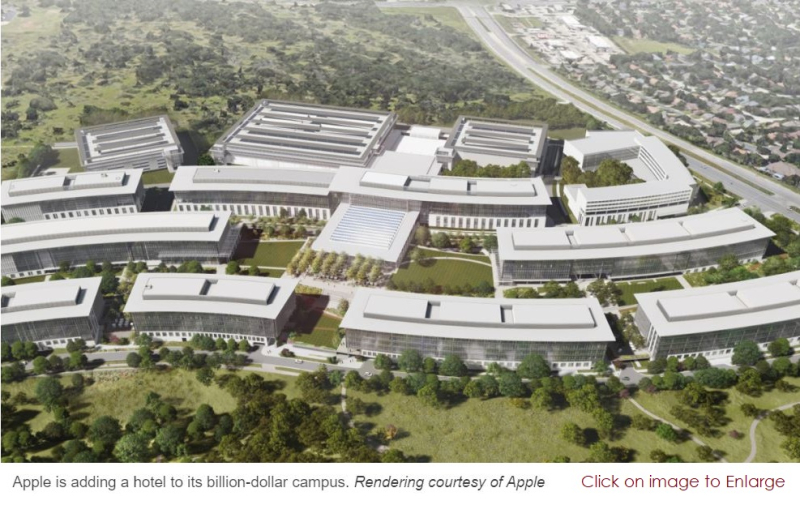 CultureMap is a major source for Austin local lifestyle news. Today the publication posted a story on Apple adding a hotel to their new Austin Campus. The report noted that "A revised site plan approved April 29 by the City of Austin shows a 75,500-square-foot, six-story hotel, as well as previously envisioned office buildings and parking garages. The revised plan doesn’t cite a hotel brand. The original site plan for the project, filed in December 2018, didn’t include a hotel.

John Boyd Jr., principal of Princeton, New Jersey-based corporate location consulting firm The Boyd Co. told CultureMap: "Apple is a trendsetter in so many ways. Its proposed hotel as part of its new Austin campus is another example of it being ahead of the curve. Having a hotel connected at the hip with its corporate parent is not common now, but in the post-COVID-19 corporate travel world, I expect we will be seeing more of this concept, especially from deep-pocketed tech firms like Apple, Google, Facebook, and Microsoft.”

Apple broke ground in November on the $1 billion campus. The project, set to open in 2022, initially will house 5,000 employees and eventually will be able to accommodate 15,000 employees. For more, read the full CultureMap report.

While the hotel may be to accommodate meetings with Supply Chain customers on planning and designing future products in a controlled environment, the exact nature of the hotel has yet to be revealed thus far. Should Apple's official reasoning surface in a future document from Austin City officials, we'll post a follow-up report.