Home Archives Contact Us Subscribe Twitter MeWe Facebook Patently Mobile
Apple has won a MacBook Patent that introduces new Finger Sensing Keys, a built-in iPhone Charger and more
Due to Social Distancing still in Effect, the Tom Hanks WWII Movie that was set to debut in Theaters will now run on Apple TV+ 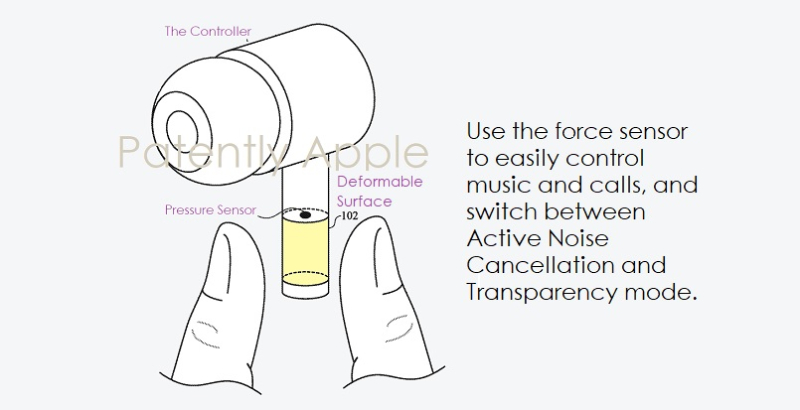 The U.S. Patent and Trademark Office officially published a series of 61 newly granted patents for Apple Inc. today. In this particular report we cover a granted patent that address the deformable materials used in Apple's AirPods Pro and Apple Pencil housings that accept taps and squeezes to control features on both devices. Other granted patents covered in this report relate to technologies behind Apple's autonomous and semi-autonomous vehicle project known as Project Titan. Another patent relates to the use of a transparent display on Macs and yet another that covers AR experiences via a 'Light Field Capture' Camera System. And as always, we wrap up this week's granted patent report with our traditional listing of the remaining granted patents that were issued to Apple today.

Apple granted patent relates to both AirPods Pro and Apple Pencil, both of which have recently added tap or force controls. 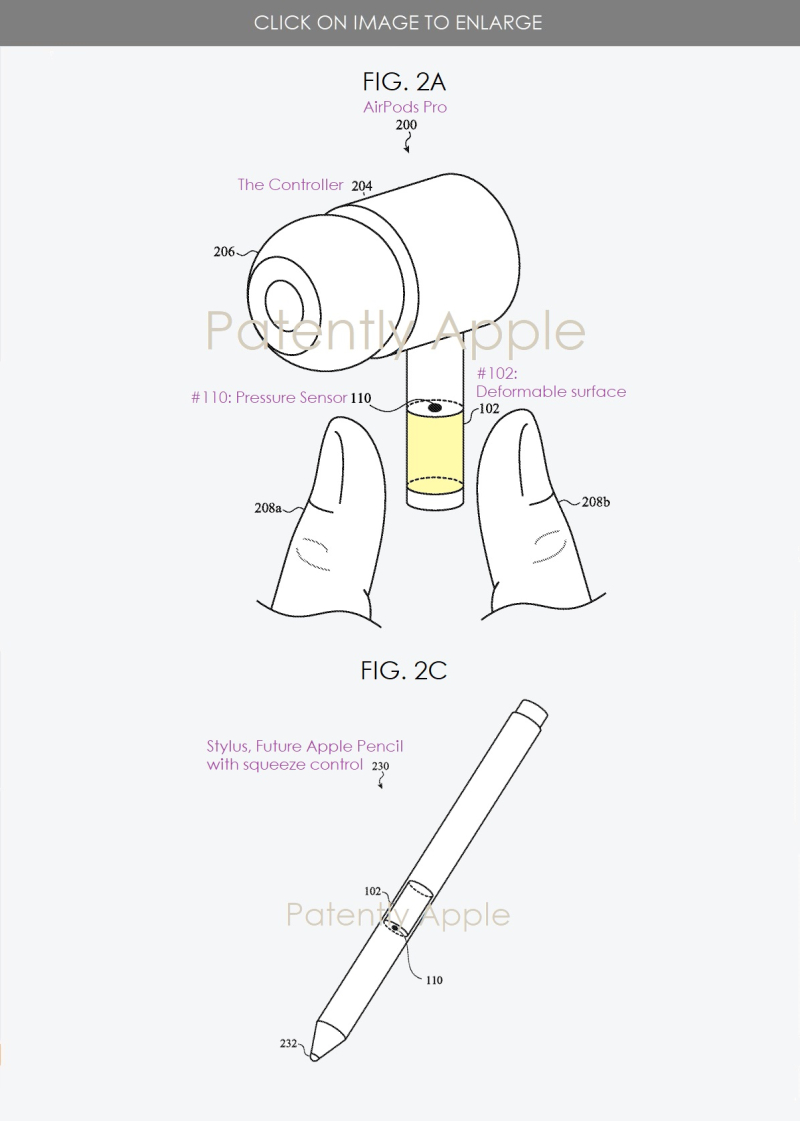 A "press and hold" on the stem triggers the force sensor to kick in and control "transparency mode" and "Active Noise Cancellation mode."

The current Apple Pencil offers "Double-tap to change tools." In the patent it's more of a squeeze to change tools. According to the patent "the term "deformable input section" will refer to a user interface part or section of an electronic device to which a user can apply squeeze, pinch or other forces to distort or deform it and effect an input operation to the electronic device." So, Apple's use of "double tap" would fall into this category.

The housing of the AirPods Pro and Apple Pencil both use an elastomeric material with high incompressibility is called an 'Incompressible Hyperelastic Material or IHM.

Apple's granted patent 10,659,866 was filed in Q3 2018 and published today by the U.S. Patent and Trademark Office. For more details, check out the patent here.

The various embodiments described in Apple's granted patent may be employed in an autonomous vehicle, possibly in connection with other sensing devices, to facilitate control of acceleration, braking, steering, navigation, and other functions of the vehicle in various challenging environmental conditions during the day or at night. 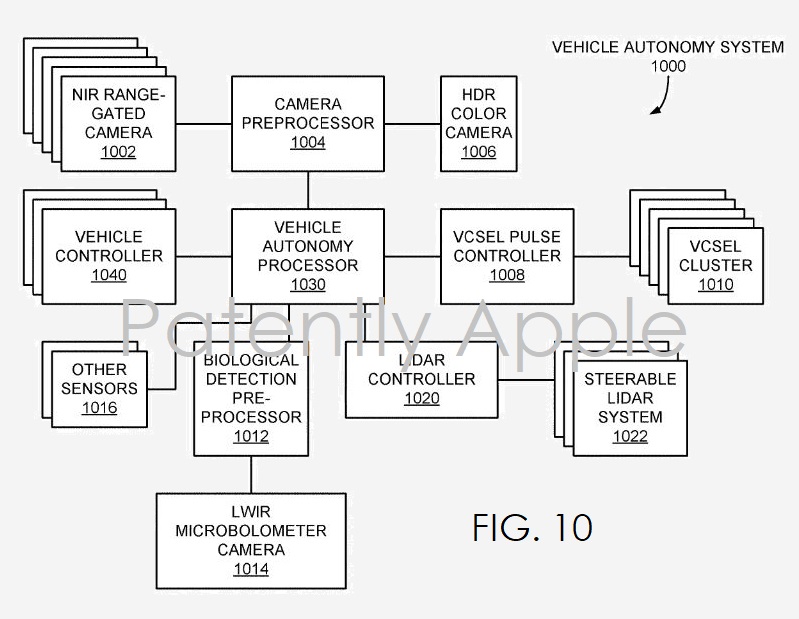 Apple's patent FIG. 10 above is a block diagram of an example vehicle autonomy system in which infrared cameras, lidar systems, and other components may be employed.

02. Project Titan Related: External communication for vehicles: Apple notes that in the course of travelling from a point of origin to a destination in a vehicle transportation network, the driving intention of other vehicles may be useful information. In a decision-making layer of an autonomous vehicle or an infrastructure in the road, the determination of a driving intention may aid in making informed decisions. For example, to better anticipate the actions of a vehicle, an indication of vehicle intent may result in more efficient movement of vehicles through the vehicle transportation network.

An external communication apparatus may indicate, to other drivers and pedestrians, the intended actions of the vehicle. In this way, that is, by improving communication between vehicles, disruptions in the flow of vehicles through the vehicle transportation network may be decreased. Additionally, generating prompts and timely signals of vehicular intention may enhance vehicle performance by reducing the number of sudden stops, slowdowns, and accelerations that waste fuel and result in undue wear and tear on the vehicle.

03: Light Field Capture: A camera system using an array of camera that could deliver an immersive AR Experience for a headset, Macs and more. Patently Apple covered the first patent here in 2017. A few of Apple's patent claims change but nothing else. 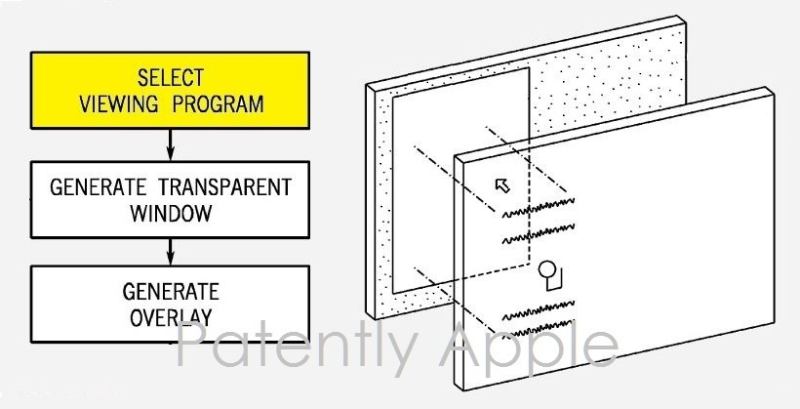 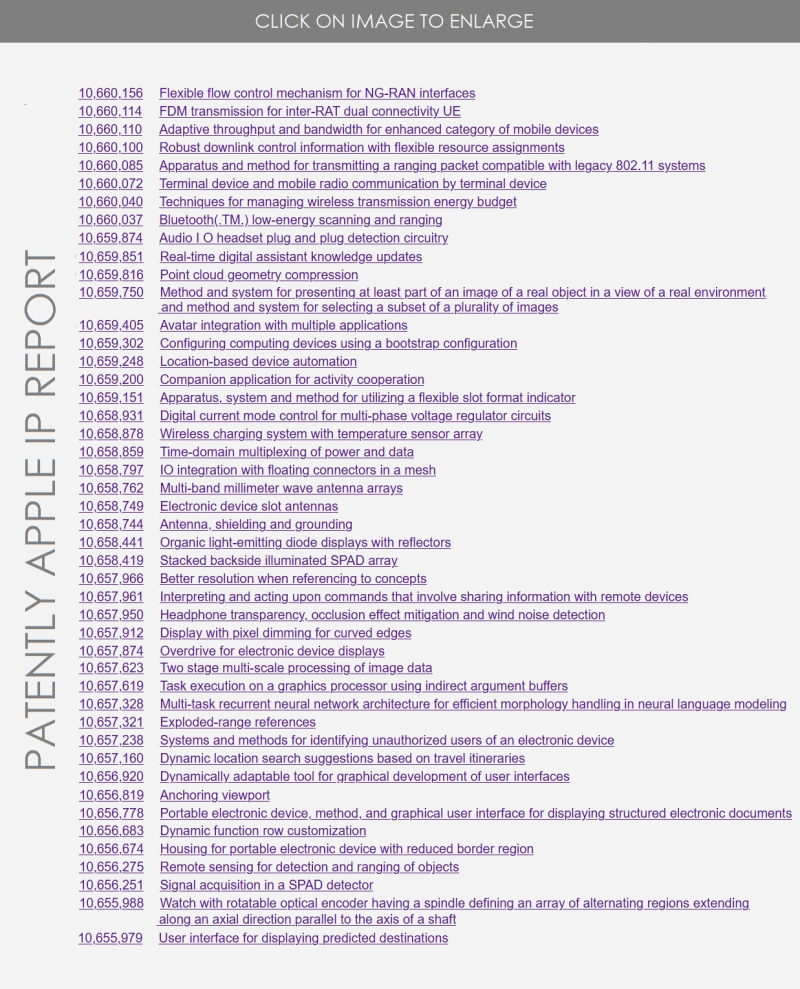