Home Archives Contact Us Subscribe Twitter MeWe Patently Mobile
A Company called Blyncsy Hints that they'll sue anyone, including Apple & Google, if they don't license their Contact Tracing Patent
Microsoft will be Updating 'Office' for iPadOS later this year with full Mouse and Trackpad Support 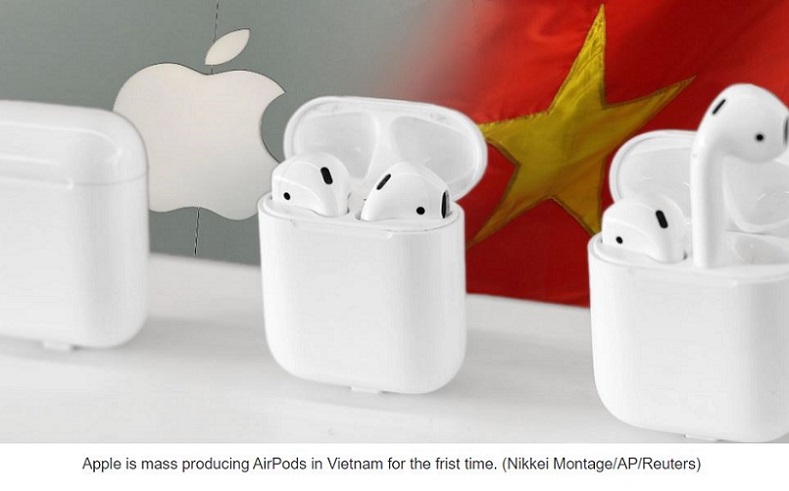 According to a new tech report this morning, Apple will be producing millions of its popular AirPods wireless earphones in Vietnam for the first time this quarter, in a sign the company is accelerating its diversification of production out of China amid the coronavirus pandemic.

Nikkei Asian Review sources claim that "Some 3 million to 4 million units, or around 30% of total classic AirPods production this quarter, will be 'Made in Vietnam.' The production relocation does not yet include AirPods Pro, a high-end version with noise cancellation features that Apple introduced last October.

The majority of the AirPods range -- including AirPods (priced at $159) and AirPods Pro (priced at $249) -- are still produced in China, despite some wearable electronics devices being hit with additional tariffs.

The mass production of AirPods in Vietnam started as early as in March. Vietnamese officials even granted special permits for a key Apple AirPods assembler to help the company bring in engineers to the country for smooth production during lockdowns." Vietnam began easing some lockdown measures in late April."

Another supply chain executive told Nikkei that "It's still an irreversible trend that big U.S. tech companies will need to gradually seek production bases outside China."

Meanwhile, the coronavirus outbreak has also hit AirPods demand, as Apple was forced to close many of its brick-and-mortar stores. Apple has told its suppliers to lower production for the first half of 2020 by more than 10% from its original orders of around 45 million units, which it placed in January, people familiar with the production plan said. The plan to introduce an update of the AirPods later this year is also currently affected and delayed by the disruptions of COVID-19, they said.

AirPods, the most rapidly growing item in Apple's hardware product portfolio, is the world's best-selling wireless Bluetooth earphones. They commanded about 50% of the global market last year, selling around 65 million units, according to Counterpoint Research, which predicts sales to grow to up to 100 million units for 2020.

Luxshare Precision Industry, also known as Luxshare-ICT, had initiated new investment last year in the Southeast Asian country and also passed Apple's qualification to mass produce the wireless headphone there, two people said. Inventec, another AirPods assembler, is currently building a plant in Vietnam, at Apple's requests, a person with knowledge of the matter told Nikkei.

Meanwhile, its acoustic component supplier, Merry Electronics, is collaborating with Luxshare to prepare a facility in Vietnam slated to begin operations as early as this summer, according to the company.

Many key Apple suppliers, such as the two major iPhone builders Foxconn and Pegatron, and iPad maker Compal Electronics, are all expanding production in north Vietnam even though they are not necessarily helping make Apple products there at the moment. Many are currently helping other tech companies, such as Google and Amazon diversify production. For more on this, read the full Nikkei Asian Review report.