Home Archives Contact Us Subscribe Twitter MeWe Facebook Patently Mobile
Due to Social Distancing still in Effect, the Tom Hanks WWII Movie that was set to debut in Theaters will now run on Apple TV+
A Bitter Ex-Apple Sub-Contractor in Europe is demanding that action be taken against Apple for basically 'wiretapping entire populations' via Siri

A number of Apple Rumors have surfaced this week and today's report will briefly touch on most of them.

According to Korea's tech site The ELEC, Chinese display giant BOE will supply OLED display panels to Apple for the upcoming iPhone 12 series in a limited way in 2020.

The report, using Ross Young, CEO of Display Supply Chain Consultants as the source states that Apple will use panels supplied by BOE and LG Display for the 6.1-inch iPhone 12 Max, with LG Display supplying more panels compared to BOE. The panels by LG Display and BOE for iPhone 12 Max and iPhone 12 will include add-on touch sensors.

Young added that "BOE will supply between 5 to 10 million panels and may be chosen as the supplier again for next year’s 5.4-inch iPhone 12S if there is no unexpected hitch.

While Young stated that "BOE's clinching of the supply deal will likely come as a surprise to South Korean component makers," it's hard to believe because there have been rumors starting as far back in 2017 that BOE was working to win a spot in Apple's supply chain and a series of reports have surfaced this year on this subject (01, 02, 03 and 04), with an additional report of ours posted in February of this year titled "BOE has Invested in OLED module lines exclusively for Apple."

Young lastly noted that "Adding BOE as a supplier will allow Apple to reduce its reliance on Samsung Display as well as reduce cost in the long-run."

Overall display panel production for the next iPhones will began in late July rather than the initially planned early June, Young wrote, with product launch being postponed from September to October.

Apple’s iPhone 12 launch will be its most successful in years thanks to 5G, OLED with pricing being low as $649, Young estimates. Below is a chart with accumulated information on iPhone 12 displays from multiple sources. On iPhone Production beyond China

This morning Digitimes reports on the rumor that Apple is accelerating iPhone production to India and Vietnam.

The Information website's latest rumor report states that Apple is to make their over-ear headphones in Vietnam in a shift from China. If true, it would be the first time that Apple has used factories in Vietnam to produce an entirely new product.

If you can stand or even enjoy Jon Prosser's type of hype show, then check out his latest video here for more news on his Apple Glass rumors and more. 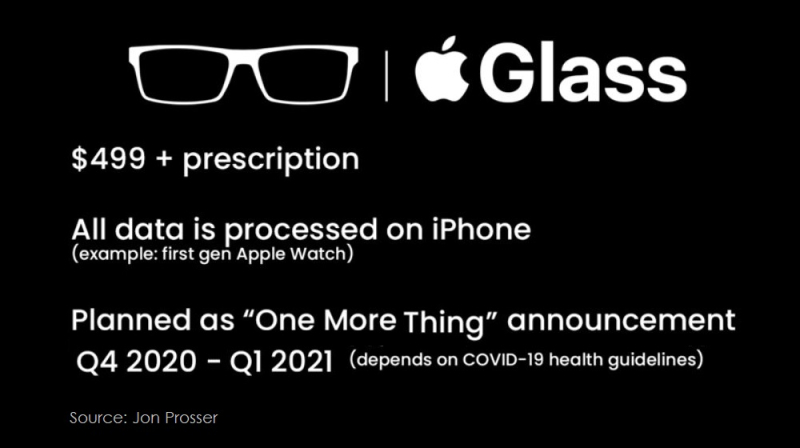 Prior to the rumors, Patently Apple covered a number of patents relating to future Apple glasses or HMDs that have pointed to the use of prescription lenses (01, 02, 03 and more).