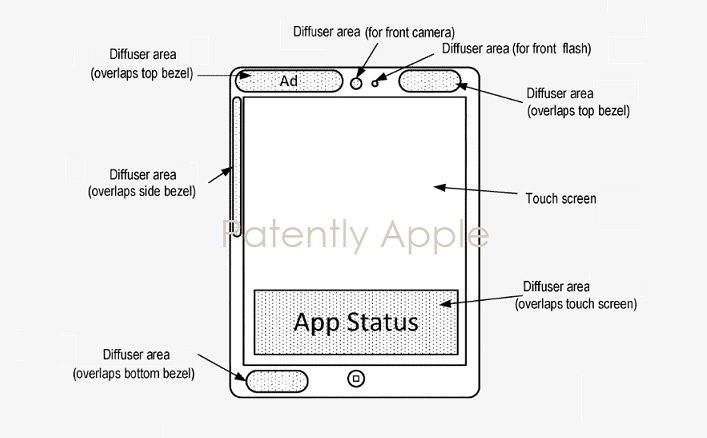 Today the US Patent & Trademark Office published a patent application from Apple that relates to systems and methods for using electronic diffusers to implement message indicators in various areas of a device. Although the inventor has worked with Apple on various patents over the years, he seems to be an independent engineer/designer. On that basis, it's a little difficult to know what Apple wanted from this invention for future Apple devices and/or accessories. Apple's patent application shows that they've cancelled all 20 of its original patent claims so that it better reflects what Apple wants protected.

Today's patent application with Apple as assignee at times feels very foreign. It's also highly technical. Our report will only touch on one of the aspects of this invention that seems viable and different for Apple devices.

Apple's patent FIG. 2 below illustrates several examples of camera-equipped electronic devices in which diffusers may be used for ambient light sensing and other functions, according to at least some embodiments; FIG. 10 illustrates several diffusers distributed on the front and back faces of a tablet computer device. 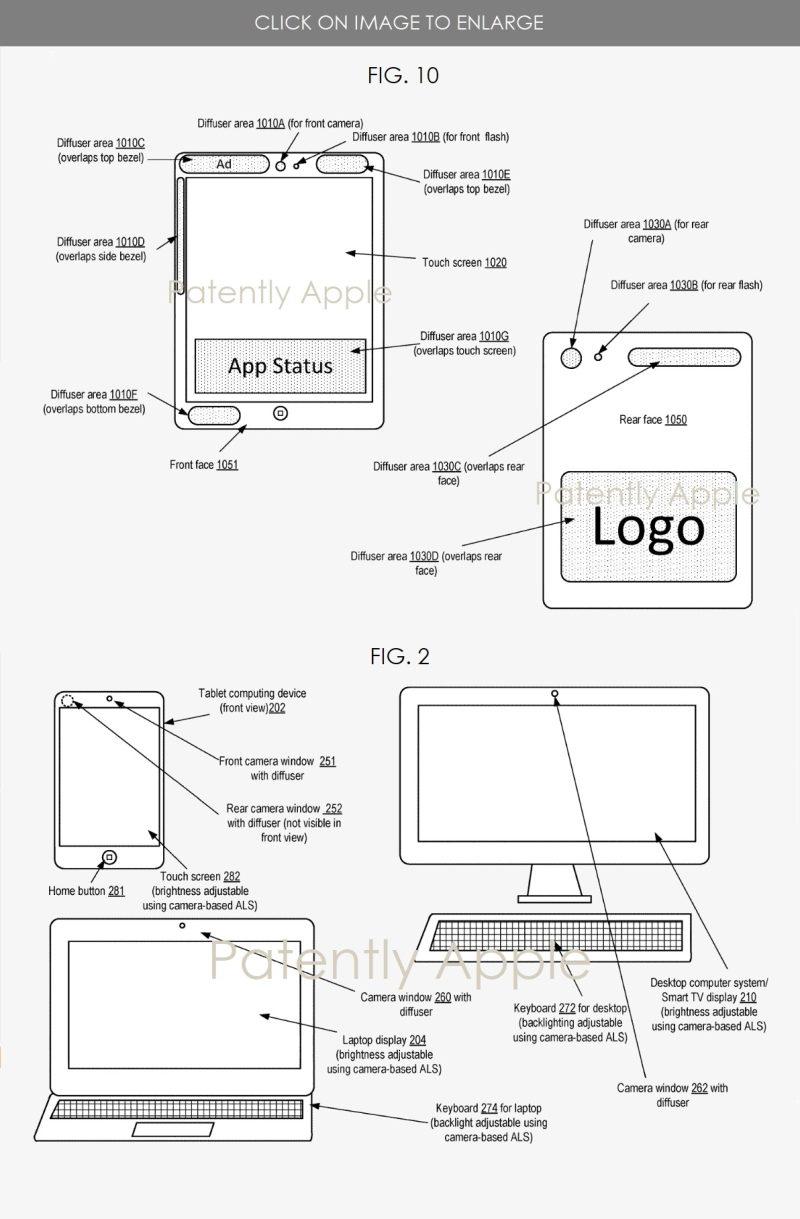 More specifically, we look at FIG. 10 a little closer. The patent filing notes that at least in some embodiments, diffusers may be located at areas other than camera windows or flash windows, e.g., on various areas of the front face and/or back face of an electronic device or display, away from the incoming light path of the camera and the outgoing light path of the flash. The diffusers are also seen built into the bezel of a tablet.

During a given time period, the primary user interface and the diffuser-based displays may show information from different sources and/or for different purposes. In at least one embodiment, a user may be able to submit diffuser display configuration requests (e.g., via a "settings" menu available using the primary user interface), indicating the data sources for the information to be displayed via one or more diffuser segments, and/or the kind of data to be displayed.

After the data sources and the durations for which the informational messages of various types have been determined, the contents of specific message or messages to be displayed during a given time interval (e.g., the numeral "5" to indicate five new e-mail messages, or a red exclamation mark symbol to indicate an indication of inclement weather in the near future) may be determined, and the appropriate signals may be sent to the diffuser segments.

It is noted that at least in some embodiments, the amount of power needed for the informational messages displayed using diffuser segments may be low enough that such messages may be displayed even while the electronic device itself is in a low power mode, e.g., while the laptop/phone/tablet/camera is in a sleep mode, hibernation mode, or a restricted-functionality mode such as an airplane mode.

As we noted, it appears that apple acquired this patent from the listed inventor. Our report only touches on one point of the invention. If you're an engineer or a technically savvy individual, you may enjoy delving deeper into this patent filing that provides over 20 additional patent figures and deeper details here.

Apple's patent application 20200167982 that was published today by the U.S. Patent Office was filed back in late January 2020. Original work on this invention dates back to August 2012.