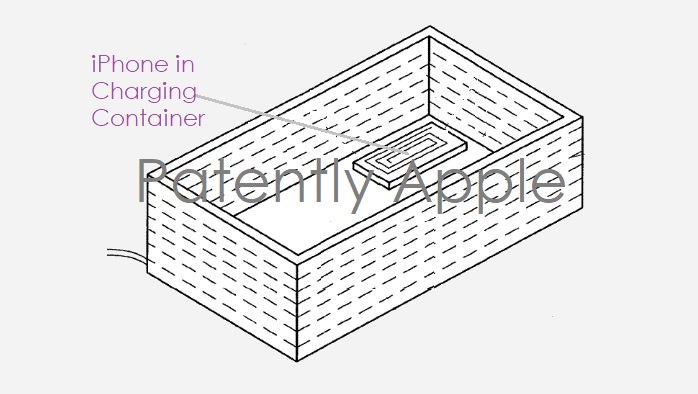 Today the US Patent & Trademark Office published a patent application from Apple that relates to an alternative wireless charging device design to their failed AirPower charging pad that's in the form of a 3D container as noted in our cover graphic. Charging coils can be built into both the base and the device's sidewalls. 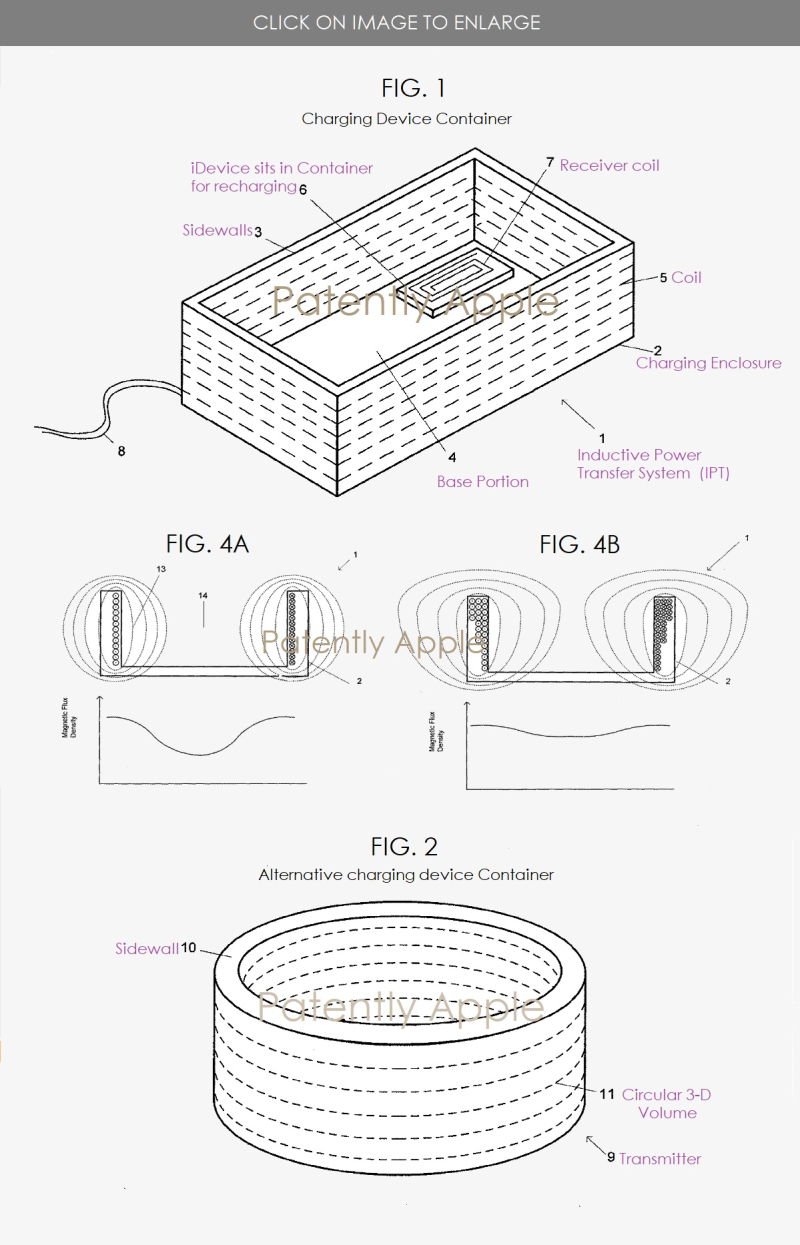 Devices capable of receiving inductively transferred power include iPhones, an Apple Watch and more without limit. In a preferred embodiment, the device includes a receiver coil that is coplanar with the base portion since this will maximize power transfer where the flux of the magnetic field are perpendicular to the base portion.

The shape of the enclosure 2 shown in FIG. 1 takes the form of a rectangular prism; however, the invention is not limited in this respect. Those skilled in the art will appreciate how the present invention can be made to apply to a variety of three-dimensional volumes that define an enclosure.

By way of example, FIG. 2 shows a transmitter #9 where the enclosure is of a cylindrical form, having a single continuous sidewall #10. In this example, the coil #11 is generally circular and is wound around the perimeter of the enclosure, as indicated by the dashed lines in FIG. 2.

In order to ensure sufficient power transfer to device receivers that are placed in this central region of the container, Apple notes that the power flow through the transmitter must be increased. This results in inefficient use of supply power. Further, receivers that are placed closer to the enclosure side walls are subjected to a stronger magnetic field than those placed at the center. This requires receivers to regulate their power flow dependent on their precise location within the enclosure.

Apple's patent application that was published today by the U.S. Patent Office was filed back in Q4 2019.

It should be noted that the invention in today's patent filing was one inherited by Apple when they acquired New Zealand's PowerbyProxi back in 2017. The acquired company was brought in to design and bring to market a wireless charging pad that Apple branded as AirPower.

AirPower was announced by Apple as coming to market at one point in time when suddenly last March Apple killed the product without details or promise of it ever returning.

In a statement Apple noted that "After much effort, we’ve concluded AirPower will not achieve our high standards and we have cancelled the project. We apologize to those customers who were looking forward to this launch. We continue to believe that the future is wireless and are committed to push the wireless experience forward."

Whether this alternative wireless charging accessory will have any better success at coming to market is unknown at this time.

Apple's patent lists the sole inventor as being Hao Li.

Posted by Jack Purcher on May 14, 2020 at 06:00 AM in 1A. Patent Applications, Apple Accessories, Wireless Charging, Wireless technology | Permalink | Comments (0)