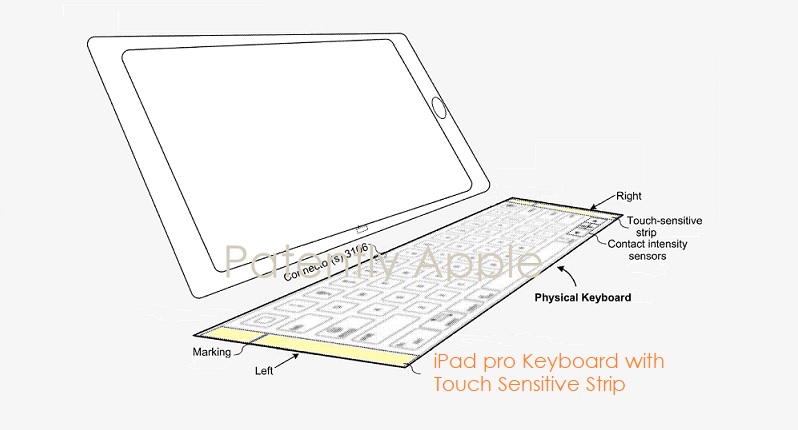 Today the US Patent & Trademark Office published a patent application from Apple that relates to a possible next-gen iPad Pro Magic Keyboard. The latest Magic Keyboard for the iPad Pro takes on a notebook style trackpad. In today's revelation, Apple illustrates an alternative design concept that introduces Touch Sensitive Strips that reside on either one or both edges of the keyboard as presented in our cover graphic. This possible future keyboard may also include new 'Contact Intensity' sensors and microphones at the bottom of the keyboard so that a user could tap anywhere on their office desk and it be interpreted by the keyboard as a form of input.

Cutting to the chase, Apple's patent FIG. 31A and 31B below illustrate a detachable with one or more touch-sensitive input strips. 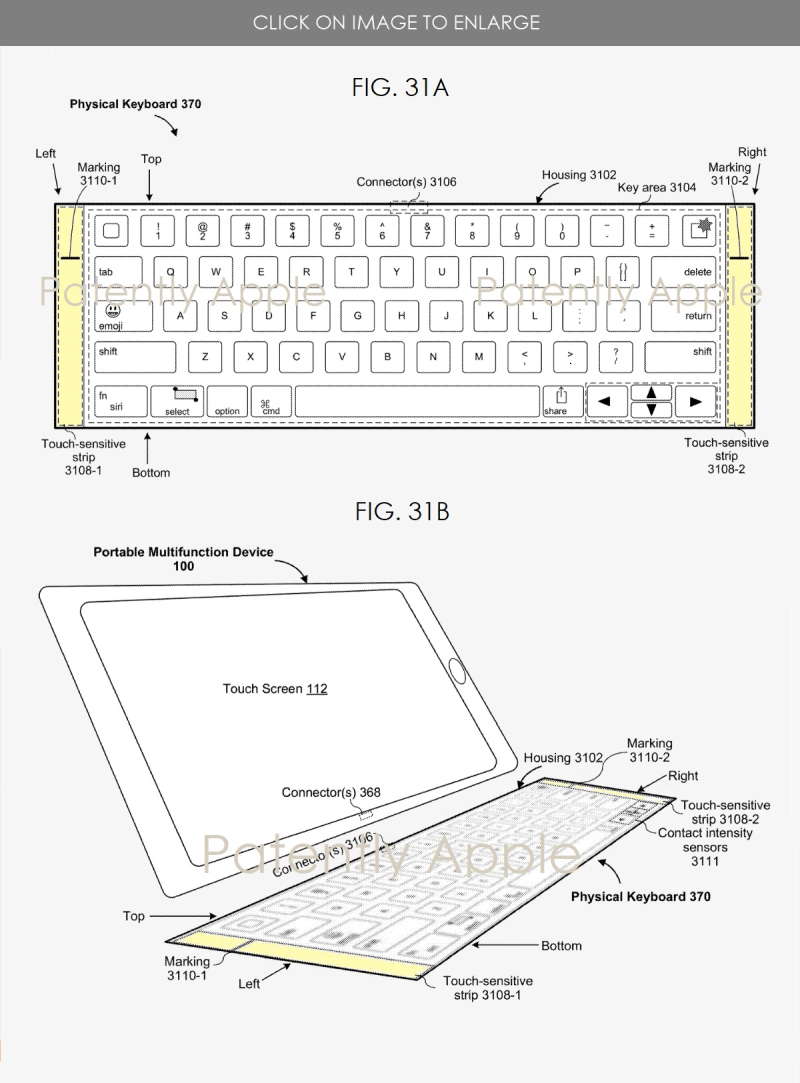 Not shown in FIGS. 31A and 31B, according to Apple is that in some embodiments the keyboard will further comprise of microphones or vibration sensors for detecting gestures, e.g., swipes on a surface of the user's desk.

Using these sensors, the keyboard provides hardware optimized for scrolling without the need for a full trackpad reduces the need to reach up to the touch screen of the portable multifunctional device.

In some embodiments, the speed of the scrolling is proportional to the speed of the swipe. For example, in FIG. 32C, a faster swipe #3124-2 (or a flick) is detected along the length of the right elongate touch-sensitive strip #3108-2 toward the top of the keyboard 370's housing. In response to detecting the faster swipe #3124-2, the iPad scrolls the email content up and to the top of the touch screen display 112 at a proportionate and higher speed, as shown in patent FIG. 32D below. 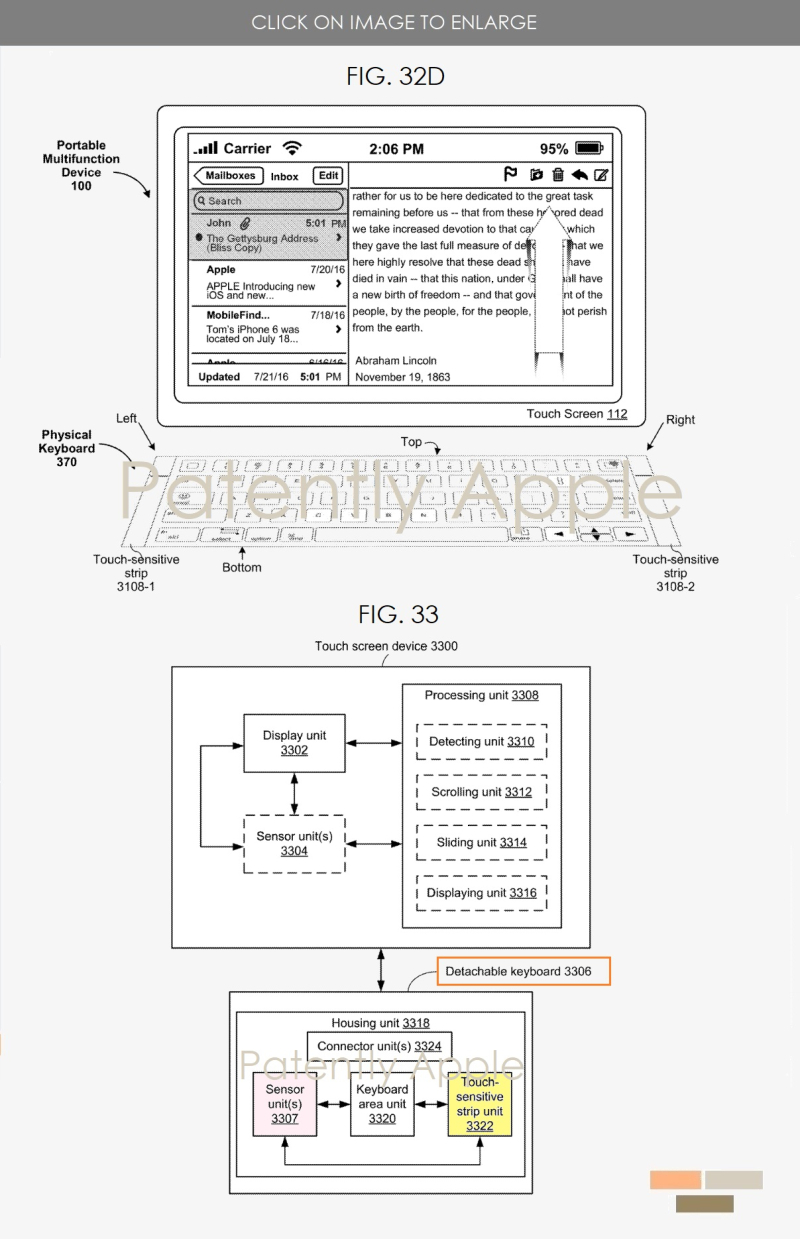 In Apple's patent FIG. 33 shown above we're able to see a functional block diagram of the iPad Pro and it's next-gen keyboard accessory with a touch sensitive strip unit along with key sensor units.

On Tuesday Patently Apple posted a granted patent report that illustrated a user drawing lines on the keys (as shown below) of a future MacBook which would explains key-sensors. So, this is in line with today's iPad Pro keyboard revelations. 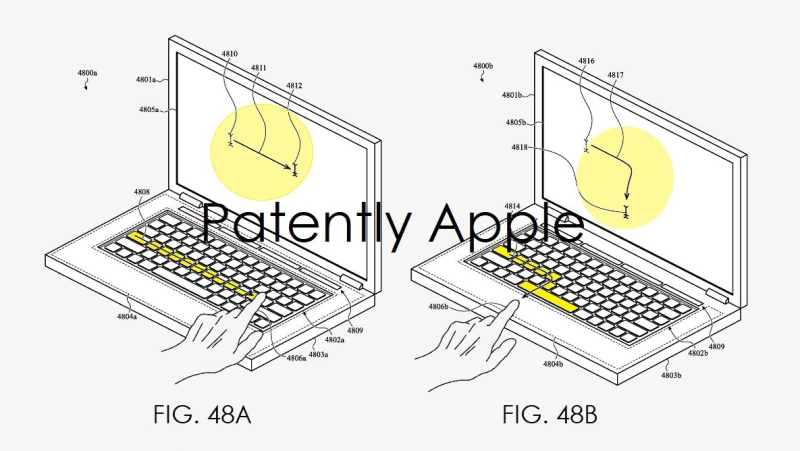 Apple's patent application that was published today by the U.S. Patent Office was filed back Q4 2019. Considering that this is a patent application, the timing of such a product to market is unknown at this time. One of the inventors, Julian Missig, is a design manager at Apple that was behind products such as the Magic Trackpad, Multi-Touch Trackpad gestures, the iPad Pro, TrueDepth camera, the Taptic Engine and more.