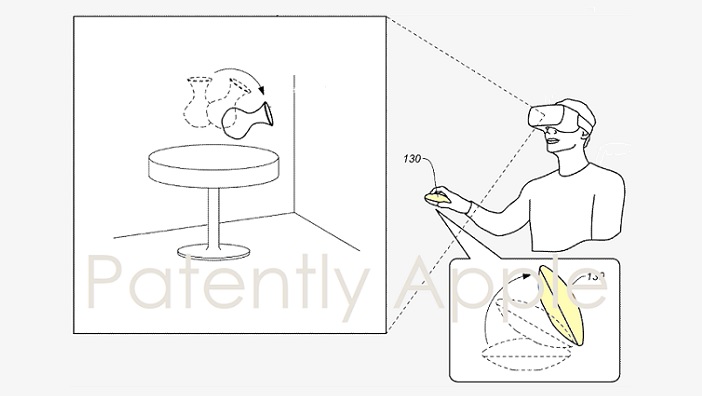 Apple accessory maker Logitech produces some great products. I personally use their "Logitech CRAFT" keyboard and love the feel and weight of it. A new patent published by Logitech earlier this month provides us with a peak at what could be next for their computer mice. One version is about a new 3D mouse/input device that may be able to work with future HMDs from Apple and others like Facebook's Oculus or the Microsoft HoloLens. It's being designed to work with 3D movement tracking for detecting tilting and/or rotation, "in-air" movements (e.g., like some presenter devices), and use it in VR/AR environments.

Logitech notes in their patent filing that while computer mice can be particularly effective for tracking movement along a two-dimensional ("2D") surface, they are not conventionally well-suited for in-air movements, particularly three-dimensional ("3D") environments in VR applications. Even some contemporary computer mice that incorporate inertial measurement units (IMUs) tend to be bulky, cumbersome, awkward, and can have a limited scope of use in VR applications.

Logitech's invention relates to next-generation mice with one being able to be used with VR gaming and content. Their patent filing claims that their invention may include an inertial measurement unit (IMU) disposed to the housing and the one or more processors, the IMU configured to detect a change in a property indicative of a three-dimensional (3D) movement of the input device. 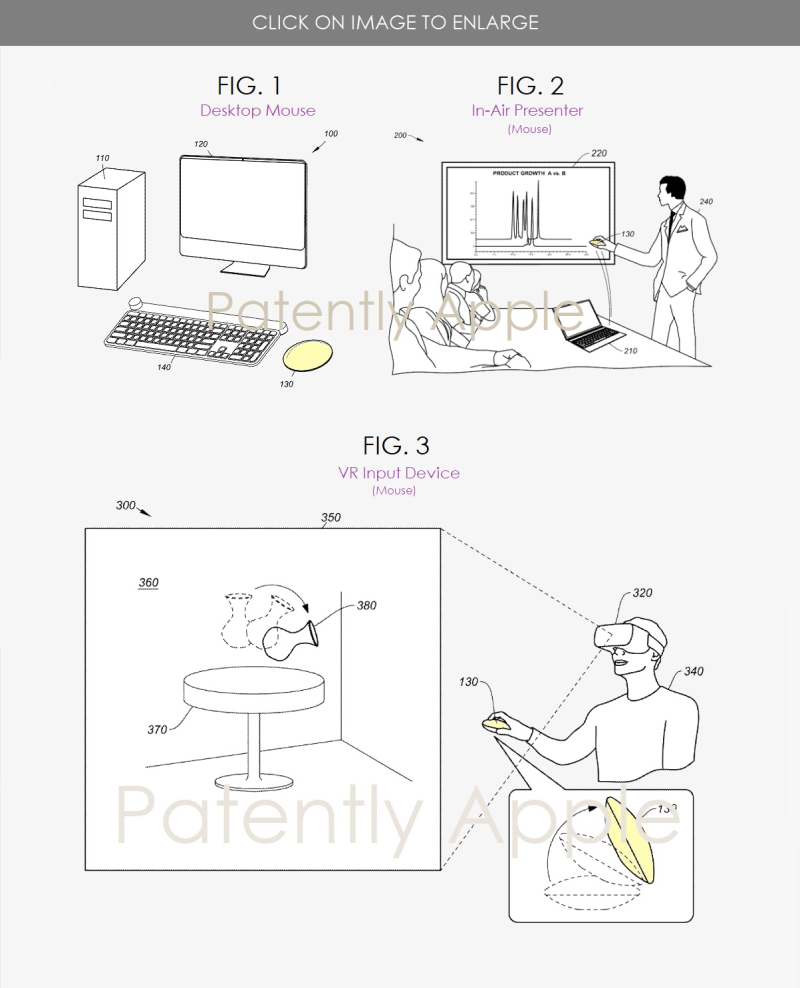 The display (#350) depicts a virtual reality scene (#360) generated by the HMD including virtual table (#370) and virtual vase (#380). As indicated above, certain inputs (e.g., touch detection, tilt detection, rotation detection, etc.) can perform different functions depending on the mode of operation that the input device is operating in.

Logitech's patent FIG. 7 below shows aspects of a movement calibration process for an input device using optical detection. Optical detection can be used to detect the presence and orientation of a user's hand on an input device using one or more IR LED emitters and IR detectors. IR light (#590) may be reflected off of a user's hand and back through the IR transparent surface. One or more of the IR detectors (#560) can detect the reflected IR light and operational logic may deduce the orientation of the user's hand on the housing #510 based on the reflected light. In some embodiments, optical detection can be used in conjunction with touch detection for improved accuracy. Logitech's patent FIG. 8 above illustrates aspects of a depressible housing instead of using a button.

Patent figures 10A, 10B and 10C above illustrate new desktop functionality. FIGs. 10A and 10B illustrate a tilt function on an input device.  While Logitech does have mice with tilting capabilities, they appear to all be associated with a mouse with a tracking ball like these.  The next-gen mice will work differently. The desktop Display depicts a chart displaying data. The input device/mouse is tilting forward causing the chart to pan downward by an amount proportional to the detected tilt. The tilt function can be configured to control any suitable function including, but not limited to, panning images on a display, controlling a volume on a media player, scrolling a document, adding a new dimension of control (e.g., pitch, yaw, roll) in a game or 3D environment, etc.

Logitech patent was published by the U.S. Patent Office earlier this month and was originally filed in Q4 2019 with some of the original work dating back to late 2017.