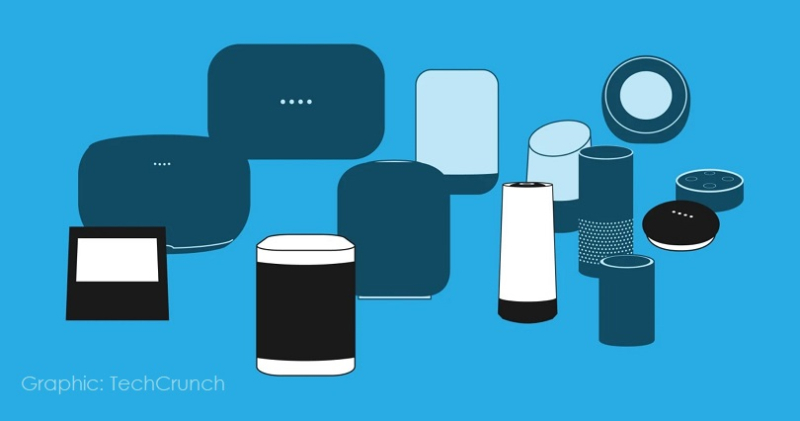 A report by eMarketer in mid-February stated that Amazon, which already holds a dominant position in the US smart speaker market, will continue to maintain this leadership through 2021, with approximately 70% of total US smartspeaker users expected to use an Amazon Echo device.

Yet in the bigger picture, beyond the focus on bare bone speakers, there are more new players that will be bringing higher quality smartspeakers to market over the next year or two. While Apple's HomePod is likely to to be one of them,  a new smartspeaker from a company called Syng will be launching their revolutionary smartspeaker in Q4 2020. Then sometime in 2021 we may see Microsoft enter the market with a new 'family of 'Surface' branded smartspeakers if their Chief  Product Officer, Panos Panay, gives his team the green light.

The players in this market along with their pricing and styles are covered well in this C/Net report.  In the last week Best Buy has been discounting Apple's HomePod to $199 from $299. I don't know if that signals that Best Buy is trying to get rid of its inventory because their not moving well or if Apple is behind the discounts as they prepare to introduce a HomePod update that's cheaper.

Yesterday we posted a report about a new Smartspeaker entrant on it's way to market from a start-up called Syng. The company was started by two ex-Apple engineers/designers. Syng speakers will introduce a revolutionary smart speaker. There was no mention of what digital assistant it will use.

We're now learning that Microsoft, who has been rapidly expanding it's Surface hardware beyond classic computers into audio related products such as Surface over-ear headphones and Surface Earbuds, is now considering to enter the Smartspeaker market.

At present all we know is that a new Microsoft patent filing was published earlier this month by the U.S. Patent and Trademark Office. Microsoft originally filed for this invention in November 2018. A two year window is enough time to bring a product to market if they so choose.

However, with Microsoft delaying Surface Neo (dual display tablet) and Surface Duo (dual display smartphone) due to manufacturing glitches brought on by COVID-19, a smartspeaker is likely not in the cards for 2020.

Microsoft's smartspeaker patent background notes that a smartspeaker is a type of wireless speaker and voice command device with an integrated virtual assistant, where a virtual assistant is a software agent that can perform tasks or services for an individual. In some instances, such as associated with Internet access, the term "chatbot" is used to refer to virtual assistants.

This usage can include, but is not be limited to, features such as compatibility across a number of services and platforms, peer-to-peer connection through mesh networking, virtual assistants, and others. Voice activated smart speakers are speakers combined with a voice recognition system to which a user can interact.

In a voice activated smart home speaker, its microphone array can be optimally placed to allow for far-field beam forming of incoming voice commands. This placement of this microphone array can be in a circular pattern. Although this allows for an optimized omni-directional long-range voice pickup, the environments in which these devices are used are often not omni-directional open spaces. The introduction of hard and soft acoustic surfaces creates both absorptive and reflective surfaces that can alter the reception of voice commands.

These acoustic surfaces provide a reverberation creating a secondary overlapping signal, which is typically undesirable. For example, a standard placement of a smart speaker against a hard wall, such as a ceramic back splash in a kitchen, creates indeterminate voice reflections for which the device needs to account without knowing the conditions of the room.

The use of onboard image sensors allows the speaker device to calibrate the microphone array to minimize the voice reflections from nearby surfaces, where such reflections reduce voice recognition accuracy.

By using onboard optical sensors, close proximity flat surfaces, such as walls, can be calibrated, that is taken into account, by turning off selected microphones and an onboard process can then adjust a far-field microphone algorithm for the missing microphones.

For an array of microphones, a far-field model regards the sound wave as a plane wave, ignoring the amplitude difference between received signals of each array element. A far field region may be greater than two meters from the microphone array of the speaker system.

If the proximity is less than a threshold distance, signal processing associated with receiving voice signals at the microphone array can be used to take into account acoustic reflections from these surfaces. The threshold distance is a distance beyond Which acoustic reflections from these surfaces are negligible or at least at acceptable levels for processing of the voice signals directly from a user source. 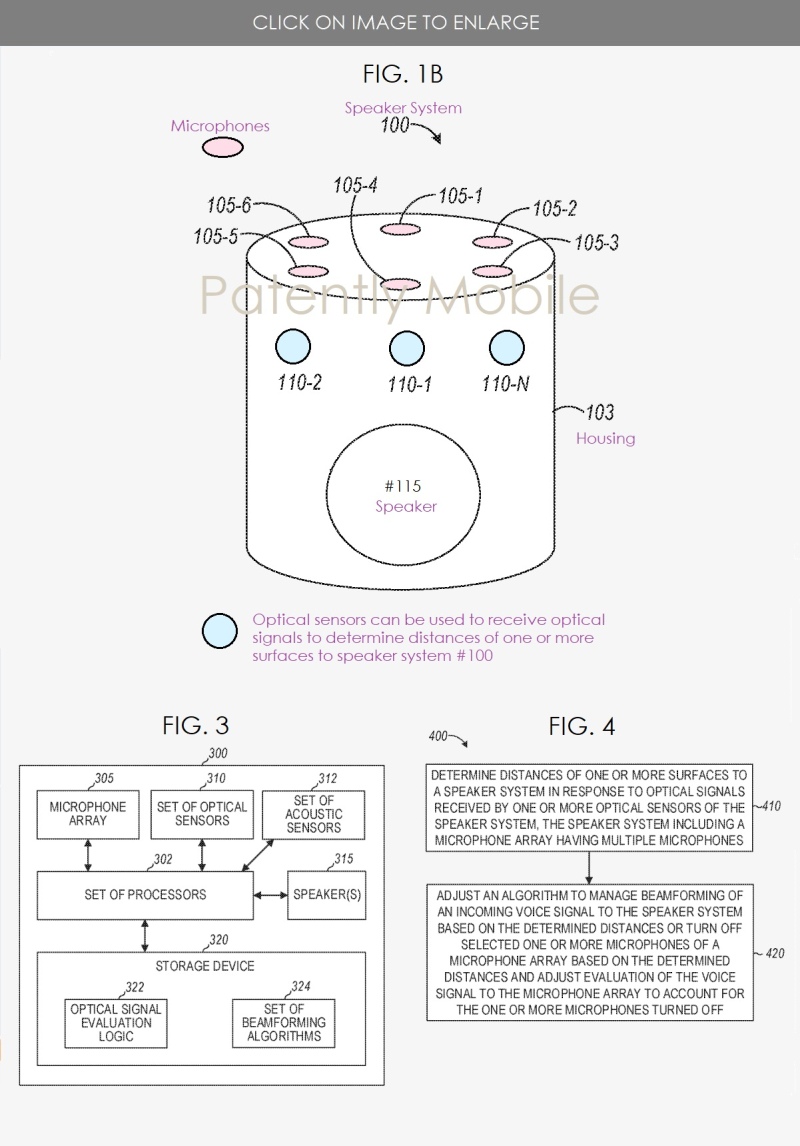 Microsoft's patent FIG. 1B above is a perspective view of a speaker system (#100) of illustrating components of the speaker system. Each of the optical sources can be realized by an infrared source and each of the optical detectors can be realized by an infrared detector. Other optical components such as mirrors and lenses can be used in the optical sensors illustrated above and can be integrated into the speaker's housing or disposed on the housing.

Although the smartspeaker housing shown in FIG. 1B above is a cylindrical structure, housing, the final product may be implemented in other structural forms such as but not limited to a cube-like structure.

Microsoft filed for this patent back in Q4 2018 and USPTO Published it earlier this month.

For the record, our Patently Mobile IP blog reported on an advanced version of a smartspeaker back in 2017 and covered it in a Patently Apple report back in January 2020 as a granted patent.

Lastly, back in September 2019 Patently Apple posted an IP report covering Microsoft winning two design patents for a lower-cost entry-level smartspeaker designs that could be a model to compete with Amazon's Echo and Google's Home Mini.