Home Archives Contact Us Subscribe Twitter MeWe Facebook Patently Mobile
For Fiscal Q2 2020 the iPhone 11 lineup accounted for 66% of U.S. iPhone Sales with the entry unit being the winner
Apple is planning to fix a Security Flaw that was first discovered by a former Israeli Defense Force security researcher

On Monday Patently Apple posted a patent application report based on a European filing titled "Apple Invents a new Protective Layer for Foldable Displays that is designed to Resist Cracking at the Fold Mark." Our report noted that Apple's invention described display modules and protective cover layer structures that could be implemented in curved, flexible, conformable and foldable display modules, and in particular with curved, flexible, conformable and foldable display panels. In one aspect, Apple's hybrid structure may prevent cracks from forming in the transparent support substrate.

Apple's approach to treating and forming foldable glass is somewhat inline with Germany's  LPKF Laser & Electronics approach that we covered in a report posted last September titled "Laser Modified Glass may be the Breakthrough needed to accelerate Durable Foldable Displays for Devices like Notebooks."

An LPKF press release published last May stated in part: "The production of foldable glass displays has been a great challenge so far. The processing of the so-called backplane with Laser Induced Deep Etching (LIDE) technology now enables manufacturers to come a big step closer to realizing long-lasting foldable displays.

This has been something that Apple had been working on since at least 2017. Apple was granted their first patent for this in  2018, prior to LPKF's press release. Below are a few patent figures from Apple's granted patent. 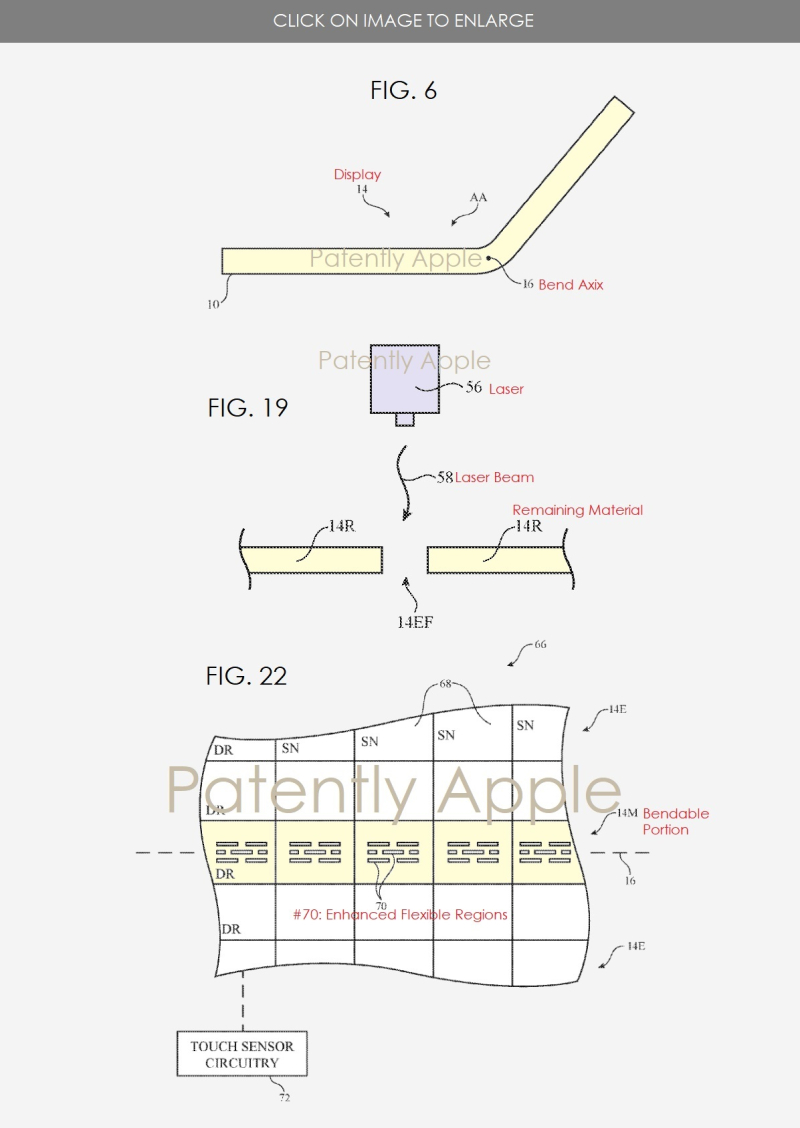 A new report posted by ETNews today states that the foldable glass market is now heating up as glass industry leaders are rushing to fill the need of folding glass that is durable and resistant to cracking over time.

The report notes that Germany's LPKF developed next-gen foldable glass manufacturing technology using laser is pushing it as its new business. LPKF has secured a technology that can materialize characteristics of folding by applying a special pattern through the microfabrication process on a part where the glass is folded to create a fine pattern. The fine pattern is then filled with polymers that have their reflectivity matched so that the patterns are not seen.

The report briefly highlights other specialty glass manufacturers and developers rushing to develop better folding substrates for foldable phone and tablets such as Chemtronics that is creating next-gen 'Ultra-Thin Glass' (UTG).

Samsung used the UTG methodology via Dowoo Insys to create the glass for their Galaxy Z Flip smartphone. However, shortly after launching, signs of the glass showing weakness was exposed by YouTuber "JerryRigEverything."

ETNews further noted that "UTI and PHENIX Inc are also working on their own foldable glass manufacturing technologies. There is also an increase in the number of relevant equipment makers such as Philoptics, JWM-Tech, and QRSystem that help raise the accuracy and the yield of manufactured glass.

Samsung have been in talks with all folding glass related companies seeking potential collaboration. Of course manufacturers are leery of Samsung knowing that they have their own Samsung Display division that would likely copy the technology over time. Samsung Display is already looking to build foldable glass production lines in Vietnam.

The only hard evidence that Apple is working on foldable devices is from a long series of patent filings. Apple doesn't own a display plant and therefore will rely on current and/or new display partners to work with when or if they decide to launch a foldable mobile device in the future. Apple supplier BOE, for example, is one such potential display maker who is currently supplying Huawei and others with foldable glass products.

Samsung, Huawei and shortly Lenovo will be bringing next-gen foldable smartphones and/or mini foldable notebooks to market later this year unless the Wuhan Virus continues to plague production schedules. The current production problems due to the virus has already forced Microsoft to delay their dual display foldable products until 2021.

Apple won't be on the cutting edge in this category until they have the right folding glass and product designs that will make sense for their enthusiastic fan base.

Apple's current focus for a major future product appears to be on all-things related to smartglasses and/or Mixed Reality Headsets while they keep an eye on the emerging foldables market by continuing to develop and file for patents for a potential future product when the time is right.

Until such time, major industry players are determined to put Apple and their current iDevices in the rear view mirror of time and replace them with cutting edge foldable devices created by real visionaries.

Well, that's at least the delusional dream of some of Apple's competitors that have yet to make an impression with their foldables. It's currently just super-sonic hype from the companies and their favorite media partners. That's not to say that foldables are doomed but rather just too ahead of their time and suppliers ability to deliver. By the time industry suppliers have the know-how to make foldables that are both durable and reliable, Apple will be ready to respond on cue.