Home Archives Contact Us Subscribe Twitter MeWe Facebook Patently Mobile
Apple to settle the California-based FaceTime Class Action for $18 million with the original 2 Plaintiffs receiving $7,500 each
Apple's More Natural Voice for Siri appears to be rolling out in Germany starting with HomePod

A new analytical report this morning from Counterpoint claims that China’s Smartphone sales fell by 22% YoY (Year-on-Year) in Q1 2020. Huawei squeaked out a 6% gain while Apple was only down 1% . The rest of the top smartphone players in China registered plunging sales between -27% to -35% as noted in the chart below. The bright spot for Apple was that their new iPhone 11 has been the number one smartphone in China for 7 consecutive months which is absolutely amazing. 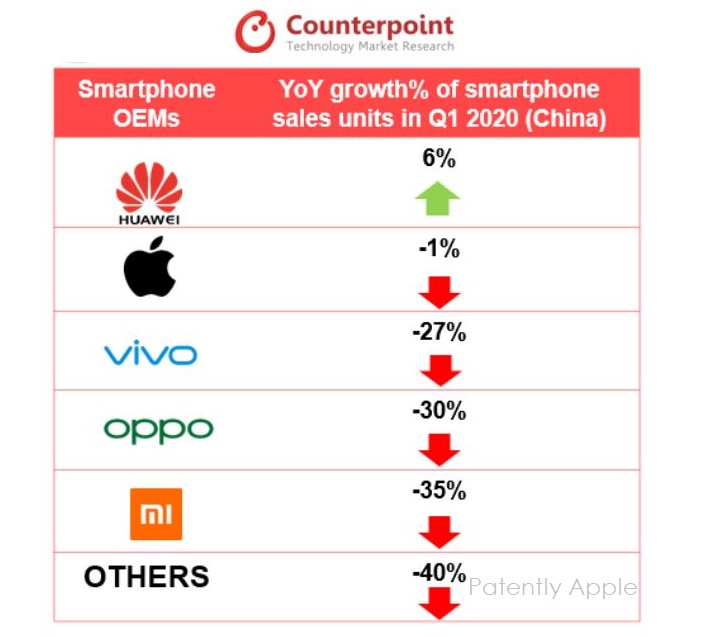 Considering that Apple's numbers to account for any second-gen iPhone SE sales which are high, Apple has done exceedingly well in Calendar Q1 2020 (Fiscal Q2, 2020) under Wuhan Virus conditions.

Ethan Qi, Senior Analyst at Counterpoint, commented:  About the competitive landscape of smartphone OEMs during the crisis, Apple and Huawei group, managed to increase market share from the same period last year, clearly out-performing the overall market in Q1 2020. Huawei smartphone sales achieved 6% YoY growth and sales of iPhones mildly dropped by 1% only, while their counterparts suffered plummeting sales with double-digit declines."

Qi added that Apple's "iPhone 11 was the best-selling smartphone model in Q1; it has topped China’s best-selling models list for 7 consecutive months. Consumers continued to purchase iPhones from e-commerce platforms despite the shutdown of Apple stores across China during February.

The report further noted that sales of 5G smartphones grew by nearly 120% QoQ in China. The dominance of Huawei in China’s 5G smartphone market was more evident— it contributed to over half of the total 5G phone sales in Q1, followed by Vivo, OPPO, and Xiaomi. Clearly this is where Huawei gained its 6% gain for the quarter. Apple should be able to get a boost sometime in calendar Q4 with their first 5G iPhones.

Counterpoint also reported yesterday that while Apple has yet to crack the top five smartphone vendors list in India, they were still able to win the +$600 premium smartphone market taking 55% of that segment. Overall India's smartphone market declined by 10% for calendar Q1 2020.

In Counterpoint's Summary they noted that "Apple grew a strong 78% YoY driven by strong shipments of iPhone 11 and multiple discounts on platforms like Flipkart and Amazon. In the ultra-premium segment (>INR 45000,~$600 ) it was the leading brand with a market share of 55%."

It will certainly be interesting to see how well the second generation iPhone SE will fare in India for calendar Q2, considering that Apple's latest iPhone was designed to make a big push into emerging markets like India. In a country like India, 5G smartphones have yet to make much of a dent. Smartphone vendors 'IQOO' and 'realme' were the first to introduce 5G in India earlier this quarter.

In late February Apple's CEO finally made it official that Apple's first flagship store will open in India in 2021. The iPhone SE is to make a dent in India leading up to their first Apple Store.

Cook stated in February: "I'm a huge believer in the opportunity in India. It's a country with a vibrancy and demographics that are just unparalleled."