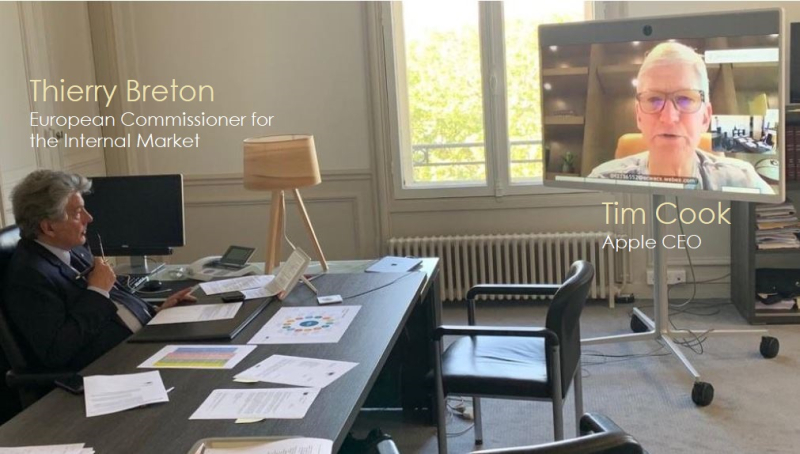 The European Commissioner for the Internal Market held talks last night with Tim Cook about contact tracking applications. Thierry Breton, who had previously discussed with Sundar Pichai, sought to obtain several guarantees from Apple, which is developing with Google a tracking technology. The European Commissioner wants to ensure that apps of this kind are anonymous, voluntary, transparent, temporary, secure and interoperable.

Thierry Breton also urged Tim Cook to work constructively with the national authorities so that the tracking apps developed in Europe run on the iPhone.

The French iGeneration website noted that "The French government is indeed seeking an exception from Apple so that StopCovid, its application which does not use the protocol developed by Apple and Google, still works on the iPhone.

According to a European official quoted by Reuters yesterday, the two men did not mention any particular case, but this request by the European commissioner is very clear support for France.

Breton stated yesterday that "It is the responsibility of companies such as Apple to do their utmost to develop suitable technical solutions to make the national apps work. Coordination with EU member states’ health authorities is paramount."

Breton said the two companies’ technology cooperation must comply with the bloc’s guidelines on the use of only anonymous data with the user’s consent and for a temporary period.

Nearly a dozen European Union countries have come up with their own apps, prompting the European Commission last week to come up with guidelines on data protection, privacy and technical for the contact tracing technology.

According to iGeneration's report, Tim Cook made it public yesterday that the first version of the technology that Apple is preparing in partnership with Google will be available to developers on April 28, well ahead of schedule.