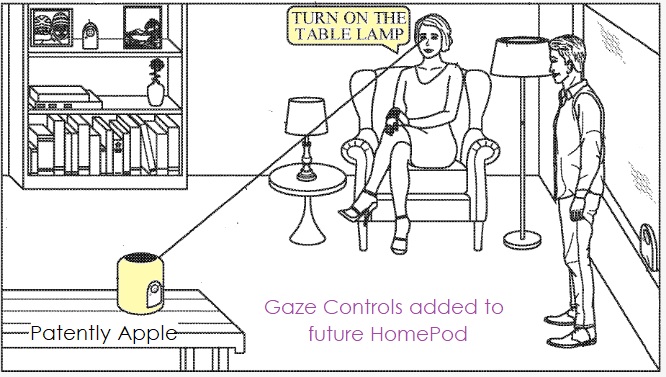 On Thursday the US Patent & Trademark Office published a patent application from Apple that reveals a next-gen version of HomePod that could have a built-in camera system that supports gaze controls and longer-range Face ID.

The patent filing also describes a camera accessory system that users could place throughout a room (and their home) that work as added eyes for this possible future version of HomePod.

The added cameras are able to capture a user's eyes and gaze directions when requesting Siri to perform a task such as turning on a very specific lamp in a room that has multiple lamps, for instance.

Apple's patent Figures 8A to 8C presented below illustrate one scenario where a user looks at HomePod while giving the command "turn ... on that light." The user first looks at HomePod and then shifts his head to gaze at the specific lamp that he wants turned on. HomePod executes the command while Siri responds "Table lamp turned on." 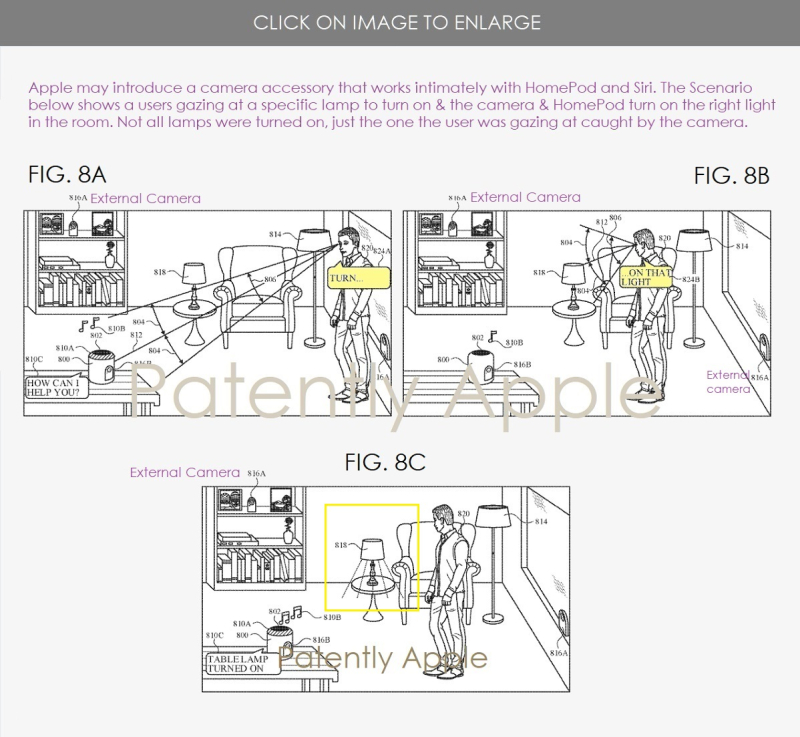 In the series of patent figures above you'll also see new Apple camera accessories (#816A) laid out in the room with one on the top shelf of a wall unit while the other is sitting on a window sill shown behind the user as pointed out in patent figure 8b.

In patent figure 8J below, the user is giving HomePod/Siri a command while not looking at HomePod directly. In this case HomePod will access the connected camera accessories in the room to determine what lamp the user is requesting to turn on, this time being the room's stand-up lamp. 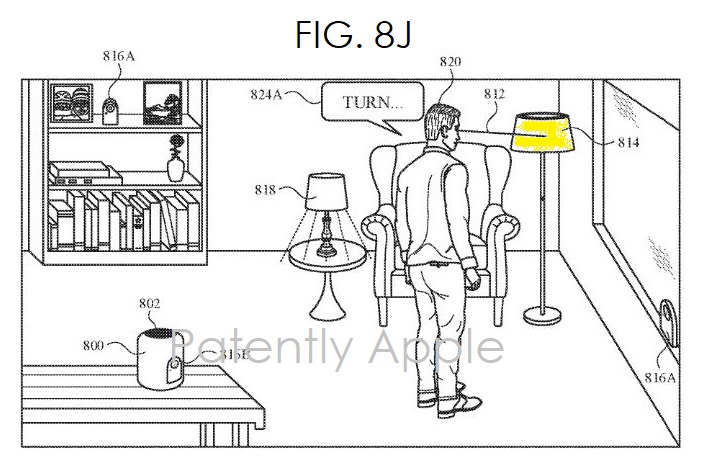 In the second round of patent figures presented below you're able to see a woman making eye contact with HomePod and requesting that the lamp be turned on. 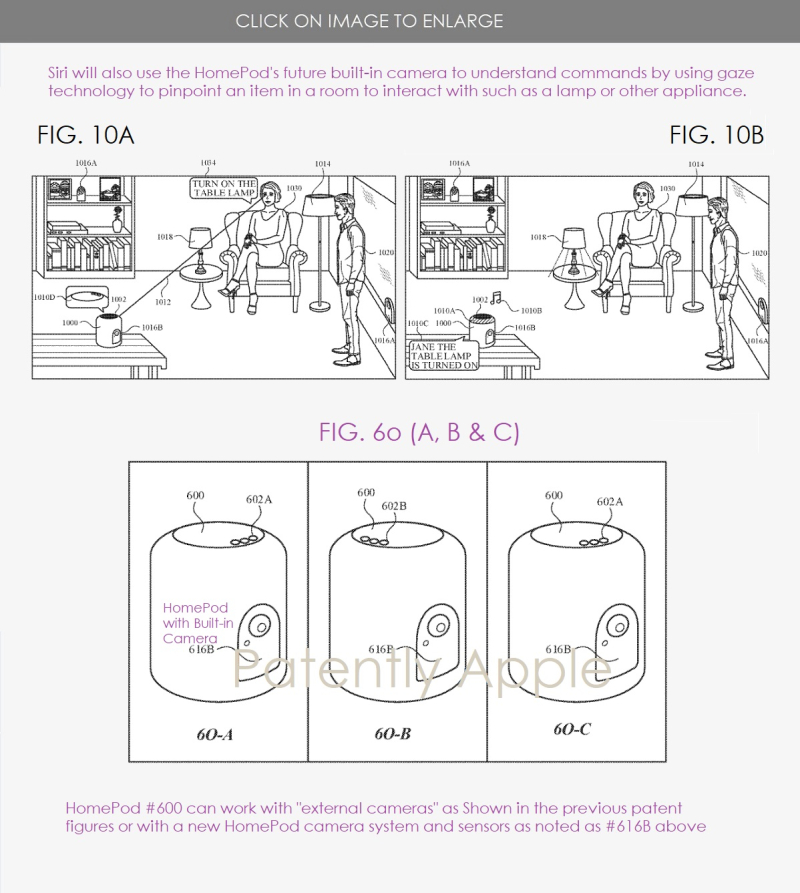 The response is personal with Siri acknowledging that it's "Jane" who made the request.  This indicates that Apple's next-gen TrueDepth camera used on this future HomePod will be able to use Face ID at a distance instead of the current version on iPhones that has a limited range. The ID first has to have been set-up on an iDevice previously for Face ID to work on this future version of HomePod.

Also provided is patent FIG. 6o (letter o) that outlines the camera system as well as a series of light formations located around the top of HomePod.

As an alternative, there could be an image of the lamp on a user's Apple Watch and by applying force touch on the lamp's image on the display, the brightness of the lamp could be adjusted as shown in the patent figures 8D and 8E below. 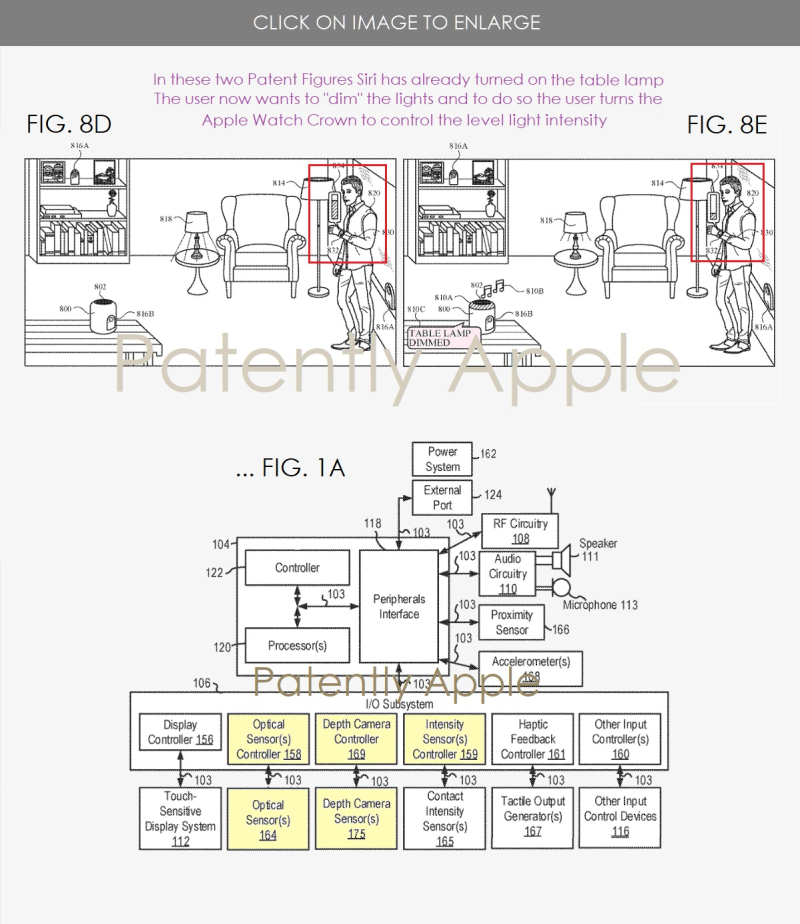 A Little More on the Depth Camera

At another point in the patent Apple's engineers state that "In some embodiments, electronic device #1000 (HomePod) obtains information about the user speaking using external cameras (accessory cameras), an iPhone, or the integrated camera in HomePod.

In some embodiments, the HomePod uses the obtained information to perform facial recognition, voice recognition, or to calculate a distance to the user speaking to determine a user identity.

Apple's patent application that was published last Thursday by the U.S. Patent Office was filed back in Q3 2019 with some work incorporated from a 2018 provisional patent. Considering that this is a patent application, the timing of such a product to market is unknown at this time.

One inventor on the patent is Ms. Bark: Experience Design and Prototyping: The position is noted as relating to "building user experience prototypes to understand interaction challenges, define technical specifications, and drive product direction."