In February Patently Apple posted a report titled "A new Report Suggests that Apple is in a Quandary over which direction to take for Millimeter Wave Antennas for 5G iPhones," followed by a second report in April titled "Apple's 2020 5G iPhone: Components like Voice Coil Motors for Cameras & mmWave for communications could be in short supply."

While Apple's newly published patent today doesn't address the full issue of delivering a future 5G iPhone with millimeter / mmWave, it does provide us a look at what Apple is working on this key technology for pure 5G connectivity and communications.

It would therefore be desirable to be able to provide electronic devices with improved wireless communications capabilities for supporting communications at frequencies greater than 10 GHz.

Apple's invention covers an iPhone that is provided with wireless circuitry, and more specifically,  include antennas arranged in an array to form a phased array antenna that may include transceiver circuitry such as centimeter and millimeter wave transceiver circuitry (e.g., circuitry that transmits and receives radio-frequency signals at frequencies greater than 10 GHz).

In Apple's patent FIG. 9 below is only a partial image due to a graphics issue noted earlier. FIG. 9 is a perspective view of an illustrative display having a filter that passes radio-frequency signals for a phased array antenna. 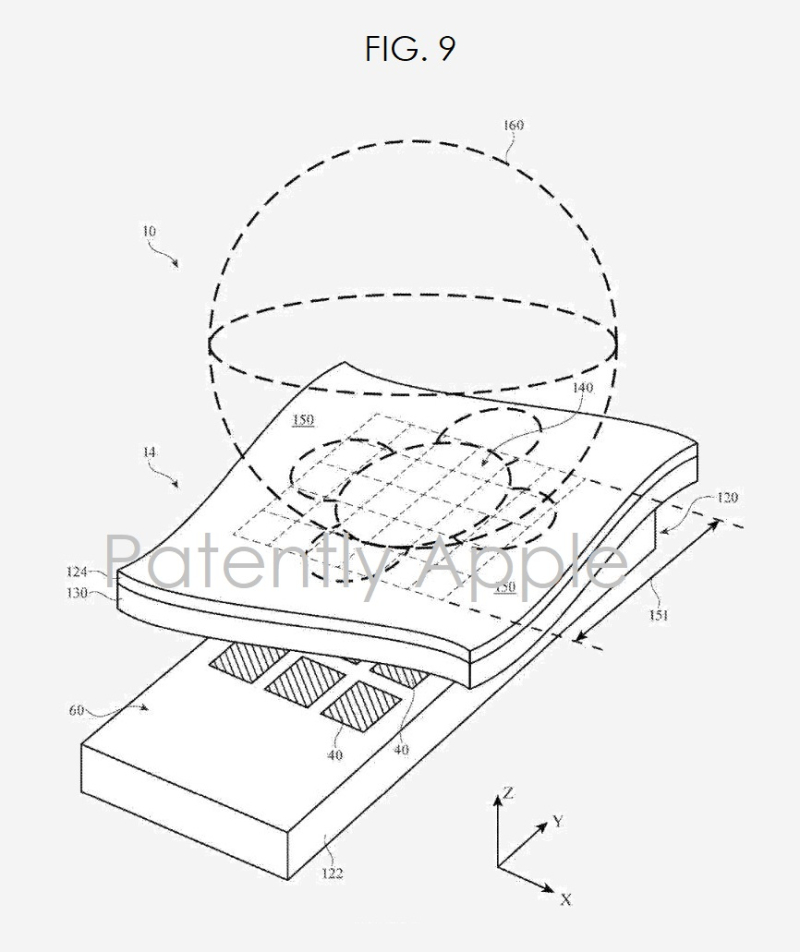 Apple's patent FIG. 9 above is view of a display and antenna module showing how the phased array antenna (#60) may be aligned with filter (#140) for covering the hemisphere above the display.

Apple's patent application 20200136234 that was published today by the U.S. Patent Office was filed back in Q1 2018. You could review more details and patent images of this invention here. Considering that this is a patent application, the timing of such a product to market is unknown at this time.

Side Note: Although this patent was posted at 4:11 a.m. PST, our site crashed for several hours. While the site is back, our graphic of FIG. 9 is still not scaled right with Typepad working on this issue.