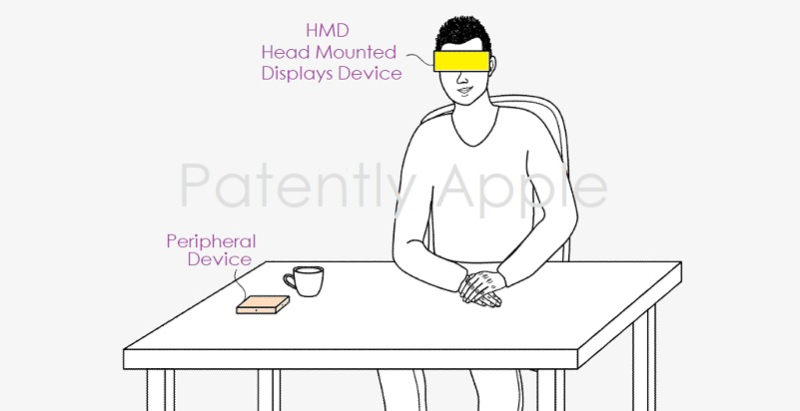 Today the US Patent & Trademark Office published a patent application from Apple that generally relates to computer-generated reality (CGR) environments, and more specifically to techniques for remote touch detection.

Apple first lays out what the invention is to accomplish. Apple notes that CGR environments are environments where some objects displayed for a user's viewing are generated by a computer. A user can interact with these virtual objects by activating hardware buttons or touching touch-enabled hardware. However, such techniques for interacting with virtual objects can be cumbersome and non-intuitive for a user.

In some embodiments, a method comprises the use of a camera sensors to obtain information about a virtual object or an augmented object seen through the Head Mounted Display device. A second method is that the system provides a virtual trackpad allowing users to move objects seen in the mixed reality headset and to use gestures like swiping or tapping.

Apple also could provide an alternative to a camera system by using infrared sources.

In the case of using cameras, Apple notes that the system #100 illustrated in the patent Figures below,  includes the option of one or more visible light image sensor(s), such as charged coupled device (CCD) sensors, and/or complementary metal-oxide-semiconductor (CMOS) sensors operable to obtain images of physical objects from the physical environment.

For example, the system uses image sensor(s) to track the position and orientation of display(s) relative to one or more fixed objects in the physical environment. In some embodiments, the system uses image sensor(s) that are inward facing (e.g., facing the user) for gaze tracking and/or hand motion tracking, which can be used, for example, to control a user's avatar.

Apple explains a Mixed Reality System as one that can include augmented reality and augmented virtuality.

Apple's patent FIGS. 1A-1B below depict exemplary systems for use in various CGR technologies; FIG. 2 illustrates an example of a system comprising a head-mounted display device and a peripheral device for enabling remote touch detection. 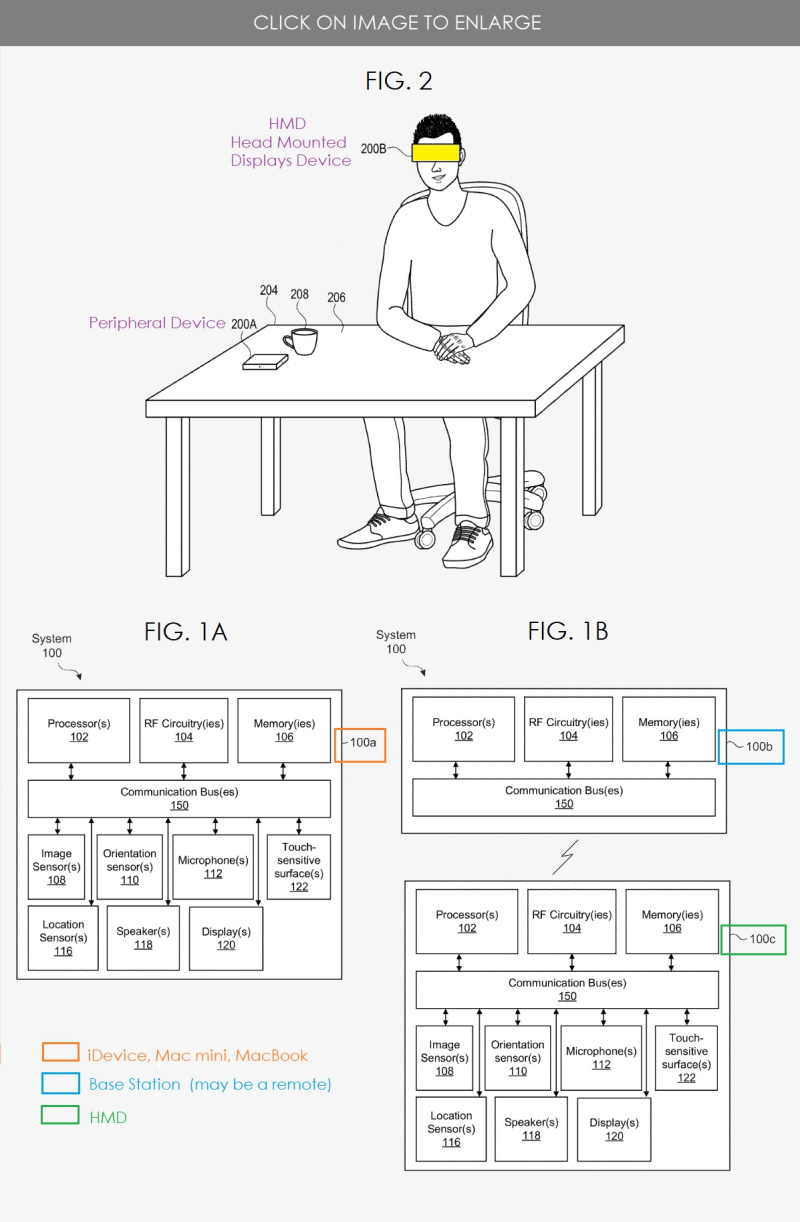 In some embodiments, system #200 forms a three-angle system (e.g., one camera sensor on peripheral device 200A and two camera sensors on the HMD.

In some embodiments, the system #200 includes peripheral device #200A (e.g., with no camera sensors) that emits infrared light to be detected by camera sensor(s) on the HMD.

In some embodiments, system excludes the peripheral device and relies on the HMD device to perform remote touch detection using depth sensing technologies.

Apple's patent FIG. 3 below illustrates an example of a notification that prompts the user to correct an error condition; FIGS. 4-5 illustrate an example of remote touch detection in a CGR environment. 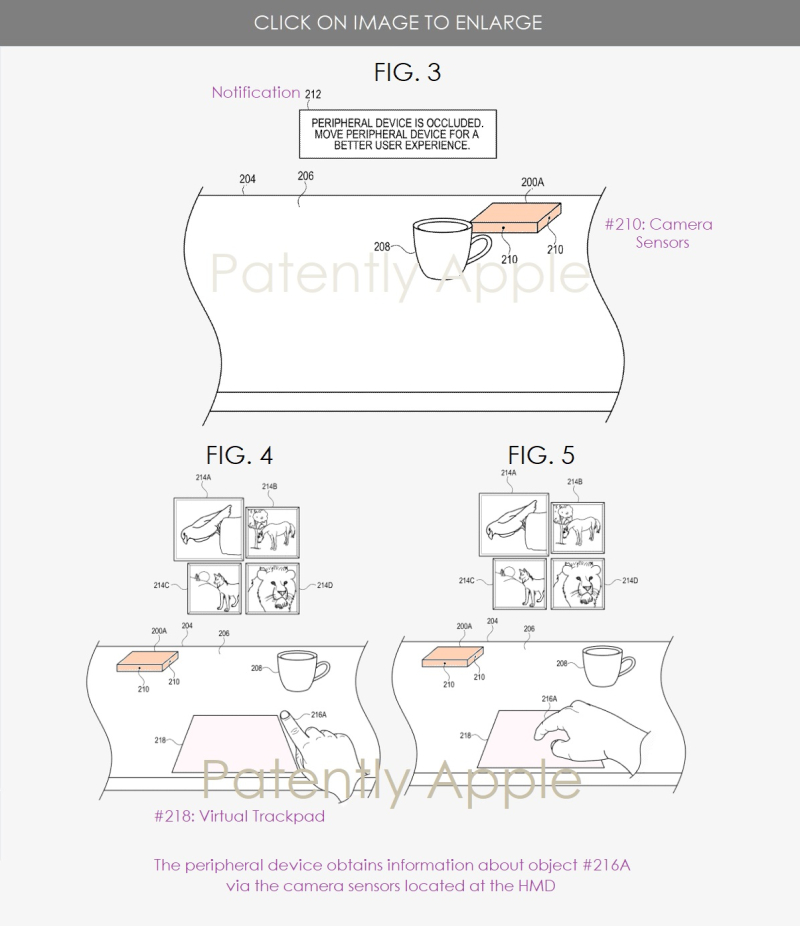 Apple's patent FIGS. 6 and 7 below illustrate additional examples of remote touch detection in a CGR environment. Here you're able to see how the user is able to use a virtual trackpad to move the photo sideways to upright using a simple hand gesture. 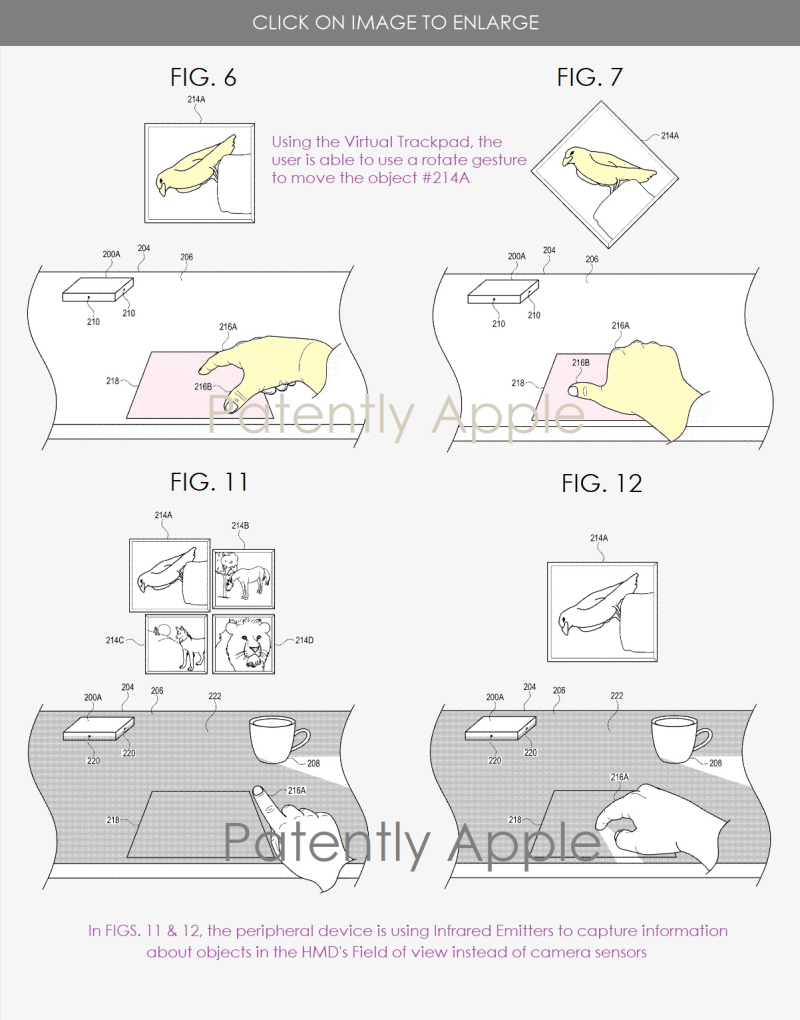 Apple's patent FIGS. 11-12 above illustrates an alternative example of a system comprising a head-mounted display device and a peripheral device for enabling remote touch detection via infrared emitters instead of cameras to detect objects.

Apple's patent application that was published today by the U.S. Patent Office was filed back in Q3 2019.  Considering that this is a patent application, the timing of such a product to market is unknown at this time.