Home Archives Contact Us Subscribe Twitter Facebook MeWe Patently Mobile
France's Competition Regulator Details in Great Depth the reasoning for their Record US$1.2 Billion Fine against Apple
The Hearables market with Apple's iPods Pro is so hot that even with COVID-19 disturbances, IDC still sees H2 Growth likely to Prevail 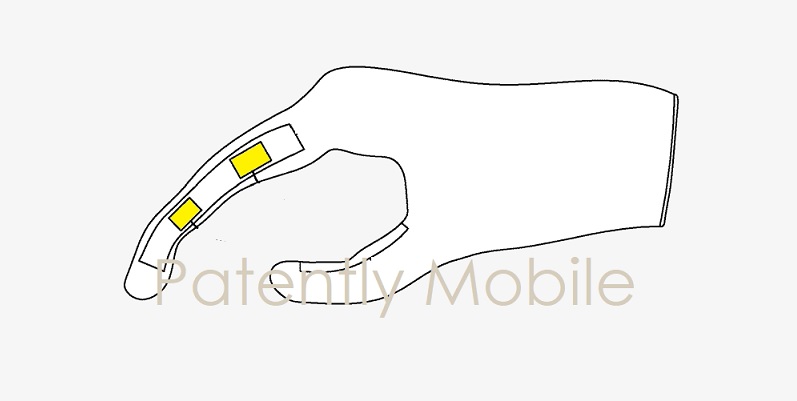 Microsoft's first patent touching on smart fabrics for future smart gloves surfaced back in November 2019. Then last week the US Patent & Trademark Office published a second patent application from Microsoft relating to a smart glove having flexible regions of varying stiffnesses for accommodating both wearability and input/output device performance.

As an example, a wearable device in the form of an electronically functional textile glove may include one or more haptic output devices to provide vibrational outputs at locations along fingers of the glove, the back of the hand, and/or palm, and/or may include motion-restricting mechanisms (e.g. electrostatic clutches, electrorheological devices, magnetorheological devices, mechanical motion restriction devices, etc.) to apply pulling, pushing, and/or locking forces to a user's fingers.

Yet attaching such devices to flexible portions of a wearable device may pose challenges. For example, mounting a haptic or other mechanical device to a flexible portion of a wearable device may result in output energy (e.g. vibrational energy, mechanical motion, etc.) of the device being attenuated by the flexible glove, thereby dampening an effect of the output device as perceived by a user.

Microsoft's invention relates to a wearable device having regions of varying stiffnesses for accommodating both the mounting of an input and/or output device and wearability.

When included, an input subsystem may comprise or interface with one or more user-input devices such as a keyboard, mouse, touch screen, or game controller. For more on this, read our full Patently Mobile report here.

For the record, Samsung (2014), Sony (2016) and Apple (01 & 02) have patents on record for future smart gloves relating to games and beyond. Apple is also hedging its bets with various engineering teams working on finger clips to work with future Head Mounted Device (01 & 02) instead of gloves.