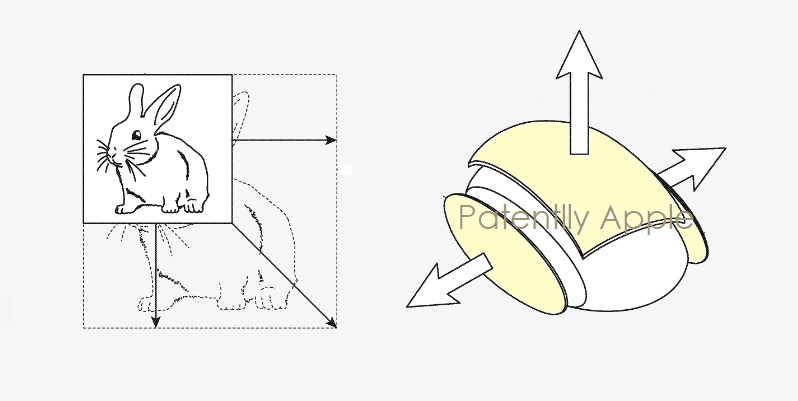 The U.S. Patent and Trademark Office officially published a series of 71 newly granted patents for Apple Inc. today. In this particular report we cover Apple's patent relating to a new Apple Mouse design with a shape changing body.  Beyond specific features that Apple has in mind for the mouse, the new shape shifting design could in theory provide users with different size hands with the ability to modify the mouse to their liking by allowing width and height to be adjusted. Whether Apple will allow for this in the future is unknown at this time.

Apple's granted patent, that bypassed the application phase under Apple, covers systems and techniques for changing the shape of a mouse or other input device.

In particular, the embodiments are directed to a mouse having an articulating member that defines a profile shape having a curvature along an exterior surface of the mouse.

The mouse may include one or more actuators for manipulating the articulating member to change the curvature of the exterior surface of the mouse. The curvature may be changed to optimize the ergonomics of the mouse and/or deliver tactile feedback to users.

In another embodiment, the profile shape or curvature of the mouse is optimized for a particular function or activity being performed at an associated computing device.

For example, a relatively flat curvature may be chosen for tasks that are typically performed on a trackpad.

A relatively curved surface may be chosen for tasks that are typically performed using a traditional mouse.

Apple's patent FIG. 1 below depicts an example mouse that is configured to change shape; FIGS. 2A and 2B illustrate example curvatures of the mouse of FIG. 1; FIGS. 3A and 3B are top-down views of an example mouse. 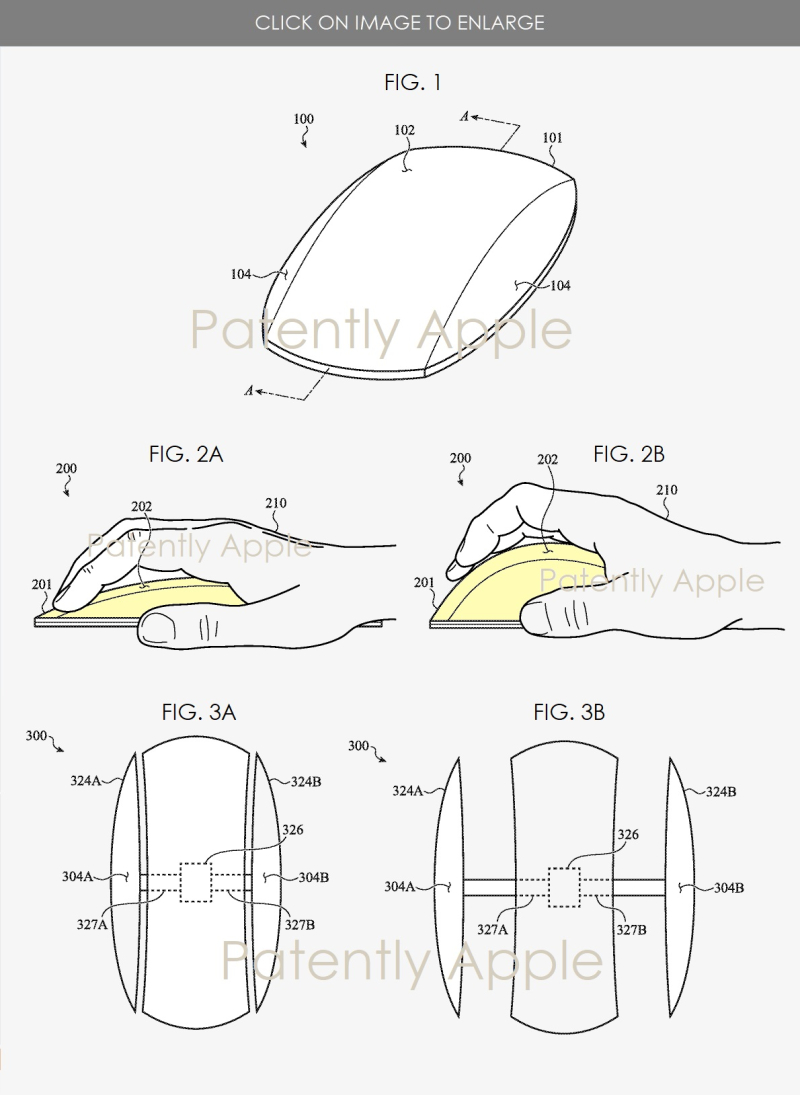 Apple's patent FIG. 4 below is a schematic view of an example mouse that is configured to transition between different shapes; FIGS. 5A and 5B illustrate cross-section views of an example mouse, taken through section A-A of FIG. 1; FIG. 19 illustrates an example change in a user interface that corresponds to a change in the shape of a mouse. 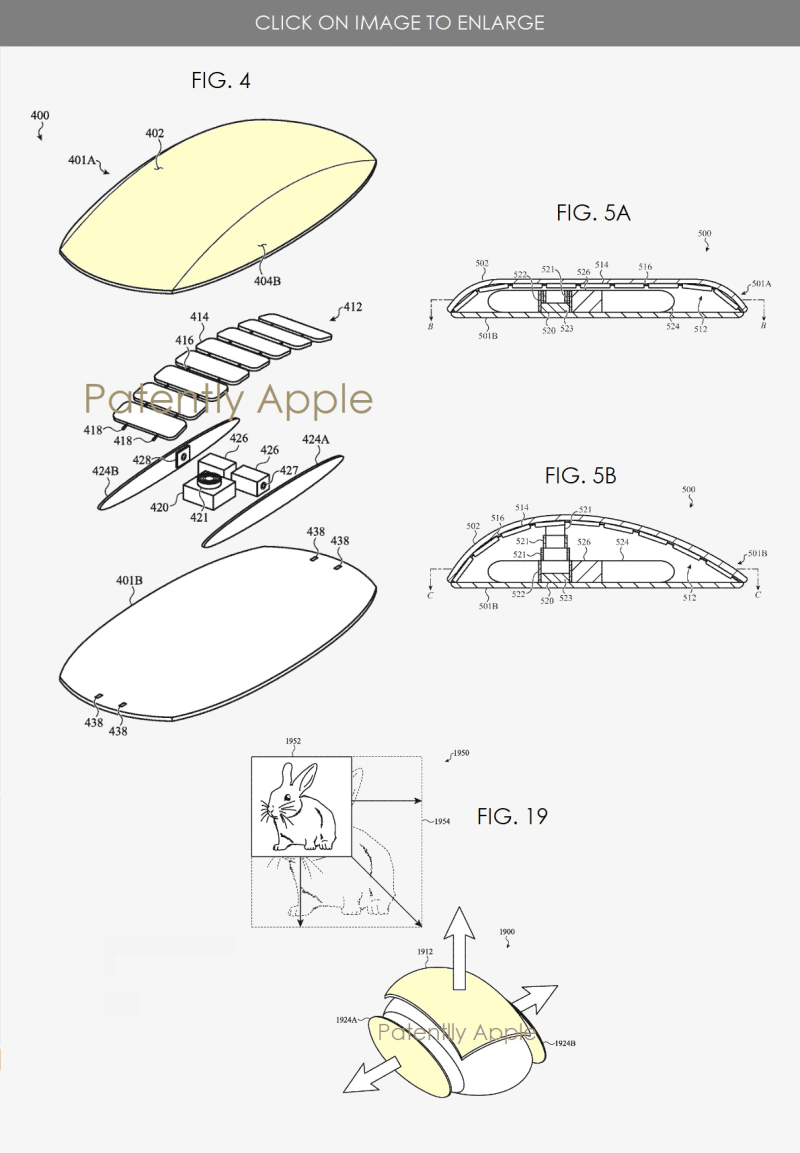 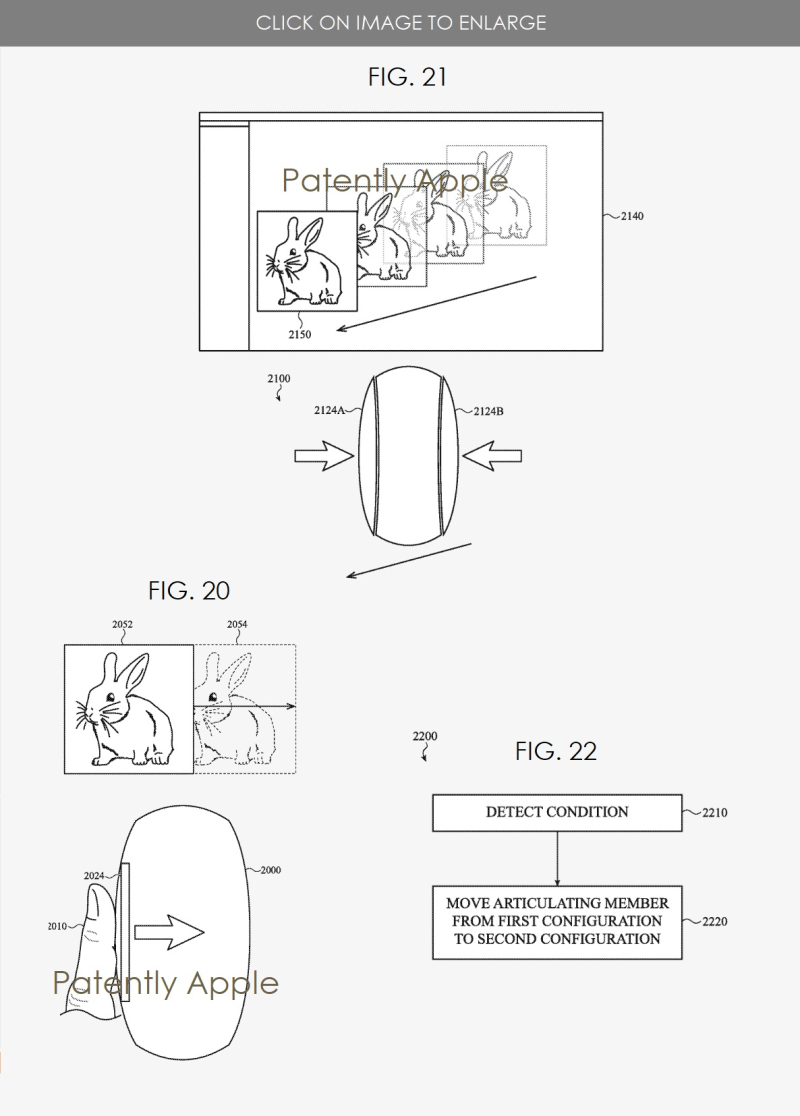 Other tidbits include the mouse may contain a display that could receive touch input, force input. The mouse could also include a biometric sensor, on/off and mute buttons and a camera.

Patently Apple was first to discover Apple's granted patent 10,592,008 that was originally filed in Q4 2017 was published today by the US Patent and Trademark Office. To dig into the details click here.