Today the US Patent & Trademark Office published a patent application from Apple that relates to display systems, including display systems containing microprojectors and narrow optical systems that could fit into a future HMD, the temple are of smartglasses and far beyond to a part of a home theater system.

Apple notes that electronic devices and other systems often include displays. For example, a head-mounted device such as a pair of virtual reality or mixed reality glasses may have a display for displaying images for a user, or a projector system may include a projector for projecting light fields to a display. The projector may include light sources that emit light fields and an ancillary optical system that conveys the emitted light to the user.

It is challenging to form a projection and display system with sufficient optical brightness, display resolution, and compactness for a scalable use. Additional care must be taken to consider user cases that include drop shock and thermal loads.

This may include, but is not limited to, wearable ocular devices, home theater applications, and virtual/mixed/augmented reality devices.

The real-world content may be viewed directly by a user through a transparent portion of an optical system. The optical system may be used to route images from one or more pixel arrays in a display system to the eyes of a user.

A waveguide such as a thin planar waveguide formed from a sheet of transparent material such as glass or plastic or other light guide may be included in the optical system to convey image light from the pixel arrays to the user.

The display system may include reflective displays such as liquid-crystal-on-silicon displays, microelectromechanical systems (MEMs) displays (sometimes referred to as digital micromirror devices), or other displays.

Apple's patent FIG. 4 below illustrates an optical system that is very narrow which will allow it to be integrated within systems having relatively narrow profiles such as head mounted devices (e.g., within the temple of a glasses frame, helmet, goggles, etc.) or other miniaturized or portable display systems. 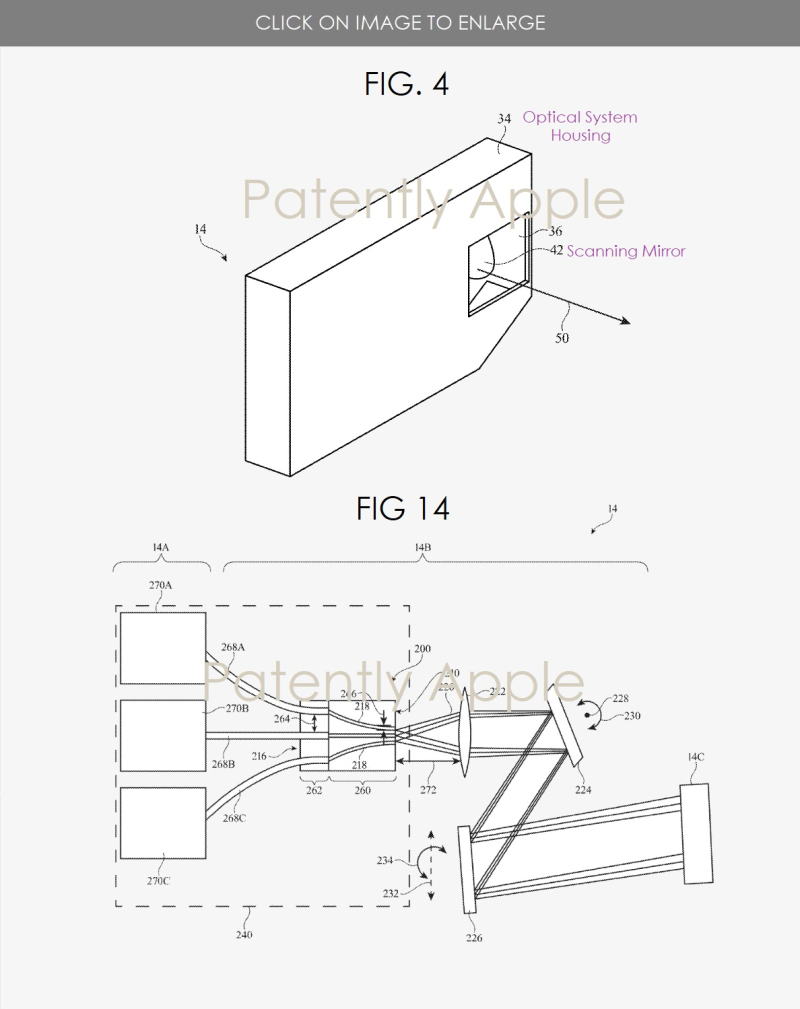 Apple's patent FIG. 14 is a top-down view of illustrative optical system components that include two independent scanning mirrors and a photonic integrated circuit coupled to light sources over optical fibers for providing image light to a user.

Apple's patent application that was published today by the U.S. Patent Office was filed back Q3 2019. Considering that this is a patent application, the timing of such a product to market is unknown at this time.