Apple Invents an HMD that functions like an iPhone, Plays Games & Projects images like a Virtual Keyboard on a table 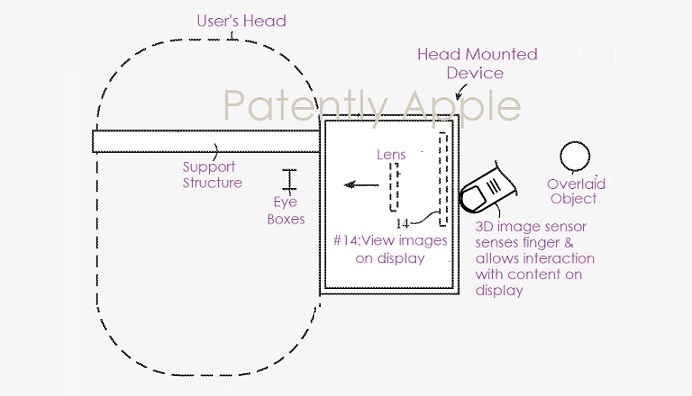 Today the US Patent & Trademark Office published a patent application from Apple that relates to a future Head Mounted Device (HMD) that allows a user to interact with 3D images on the display with their finger and interact with a virtual keyboard sitting on a table top. In this invention Apple discusses a projector being integrated into the HMD and/or the option of being able to attach a projector unit to the HMD that could project a game or virtual keyboard onto a table top surface.

Wearable electronic devices such as head-mounted devices have displays for presenting images to users while the devices are being worn.

The head-mounted device may communicate with associated external electronic equipment such as a computer, gaming system, cellular telephone, or other host.

In some configurations, the head-mounted device may serve as a stand-alone device.

In some configurations, an input-output component may be formed on a movable member that can be moved between a stored position and a deployed position.

A projector may project images onto nearby surfaces. The images may include a virtual keyboard with which a user may interact. 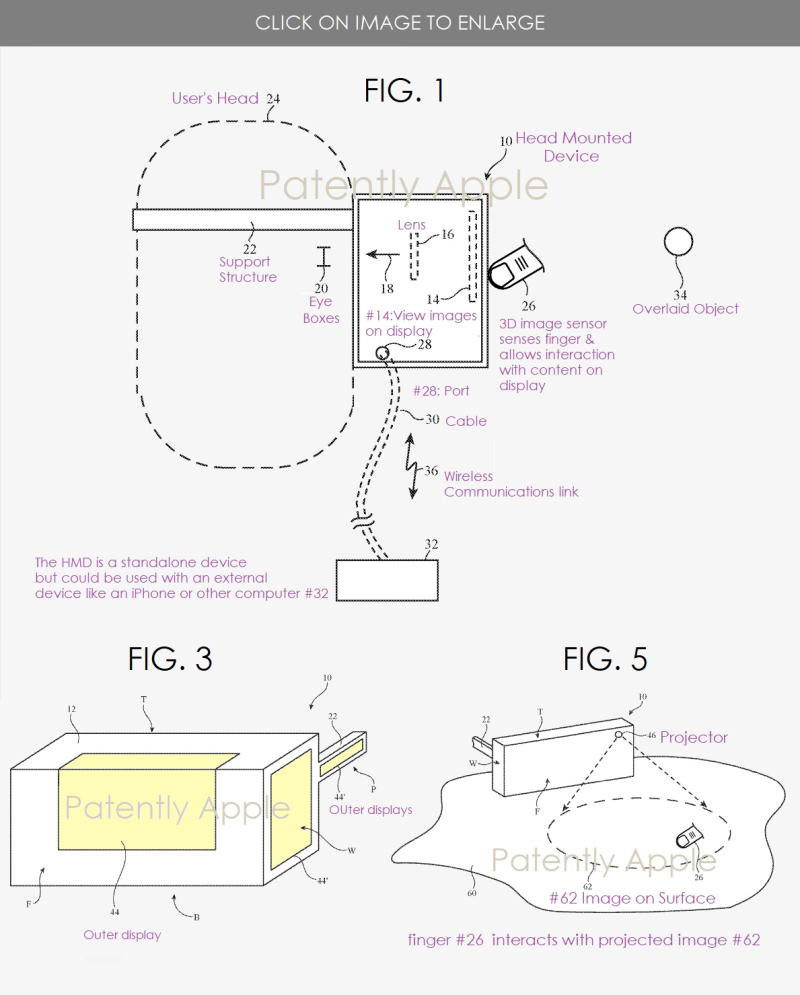 In Apple's patent FIG. 3 above we're able to see a perspective view of the HMD in an illustrative configuration in which the outer display #44 is formed on exterior portions of the HMD when it's not being worn on a user's head. The HMD is sitting on a table top or other support structure and/or may be held in the hand.

In this type of scenario, the HMD and the sensors and other input-output devices #12 of the HMD can be used as an accessory controller for external electrical equipment #32.

Corresponding output from the service may be provided to the user using the output circuitry of the HMD (e.g., audio output, visual output, haptic output, etc.).

Because the HMD doesn't need to be placed over the eyes of the user while the user supplies input and receives output from HMD, the user may stay engaged with people in the vicinity of the user and may remain aware of the user's surroundings.

For example, if the HMD display is being used to present a game to a user, the outer display #44 may display some or all of the same game images to people or friends of the user nearby.

Game statistics such as game scores, text that informs others that the user is playing the game (e.g., "game in progress"), and/or other suitable information related to the content on display #14 may also be displayed on outer display #44.

The HMD can Project a Virtual Keyboard

Apple's patent FIG. 5 above is a diagram of the HMD in an illustrative scenario in which the HMD is resting on a table top or other external surface such as surface #60.

The projector #46 in the HMD may display images such as image #62 on surface #60. The content of image #62 may be the same content that would have been displayed on the HMD display if worn on the user's head.

As an example, a user may use a web browser application that is running on the HMD to obtain information from the internet while this information is being presented to the user as part of image #62 on the table top.

If desired, a sensor (e.g. a three-dimensional image sensor or other sensor in device 10) may sense finger input at various portions of image #62 from a user's finger #26. This allows the user to interact with the content being displayed on the table top surface.

Apple's patent application that was published today by the U.S. Patent Office was filed back in Q2 2019 Considering that this is a patent application, the timing of such a product to market is unknown at this time.