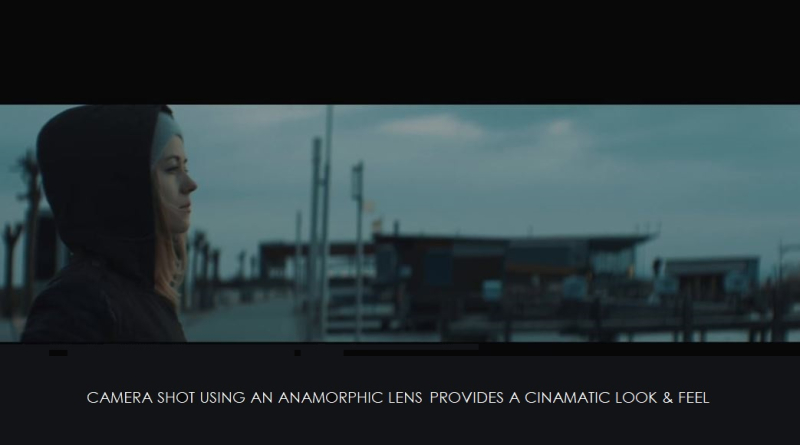 Last week Patently Apple posted a report titled "Apple Introduced the new iPad Pro with a Breakthrough LiDAR Scanner that Apple first filed a patent for close to Nine Years ago." On that same day Apple's new iPad Pro press release emphasized the LiDAR scanner this way: "The breakthrough LiDAR Scanner enables capabilities never before possible on any mobile device. The LiDAR Scanner measures the distance to surrounding objects up to 5 meters away, works both indoors and outdoors, and operates at the photon level at nano-second speeds."

On Thursday the US Patent & Trademark Office published an Apple patent application that revealed more of the technical aspects of an Apple LiDAR system with the use of new anamorphic optics.

The problem however, is that Apple is completely silent as to what their new LiDAR scanner invention is for exactly. We can likely eliminate the new scanner for any current iDevice because of the potential distance this scanner is designed for. According to Apple, "The distance to the target scene may range from tens of centimeters to hundreds of meters which is a far cry from Apple new LiDAR for the iPad Pro which is limited to 5 meters.

Surely at hundreds of meters, the patent filing must be describing a LiDAR scanner for a vehicle, right? Yes, technically it could, even though Apple never describes a vehicle nor illustrate such in their provided patent figures.

Back in late 2016 Patently Apple posted a report titled "Apple Invents an Improved Graphics System for Gaming or Possibly an Autonomous Drone Device." 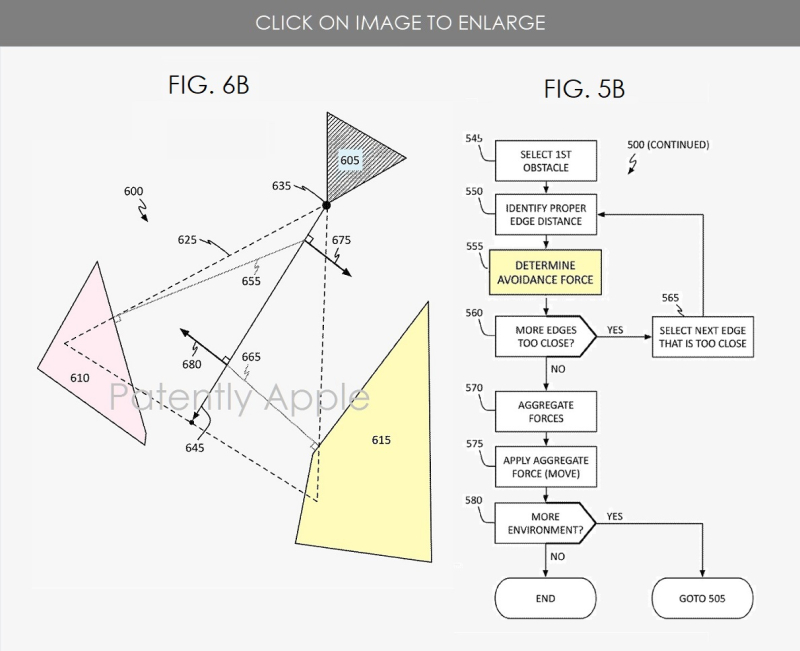 Obviously, the LiDAR scanner that Apple's patent filing is describing is for a range between "tens of centimeters to hundreds of meters" which would strongly suggest some form of vehicle or device that requires those distance parameters like a camera.

The DroneZon article provides us with a wide variety of applications where such a scanner could apply to an Apple device starting with a headset for AR games, gesture recognition, indoor navigation, 3D photography and obstacle avoidance for a consumer, commercial or military drone.

While LiDAR scanning can be used in so many interesting future applications for Apple, the patent filing finally includes one tiny clue that adds to the uniqueness of their future scanner. Once searched, you can see that there's a common theme throughout the patent starting with the very first patent claim and mentioned a total of 25 times overall. What is this clue? It's Apple describing an "anamorphic lens."

All of a sudden, the use of an anamorphic lens opens a whole new world and one that Apple likely wants to include in future products like the iPhone. It applies to an advantage for both still photography and shooting video.

The video below shows you what an anamorphic lens can do for video shots and interestingly enough it just happens to be explained using a drone (though it doesn't have to be).

With the camera being so important on any current or future iPhone, this is worth checking out as it contrasts a "built-in" lens vs. one that is "anamorphic." 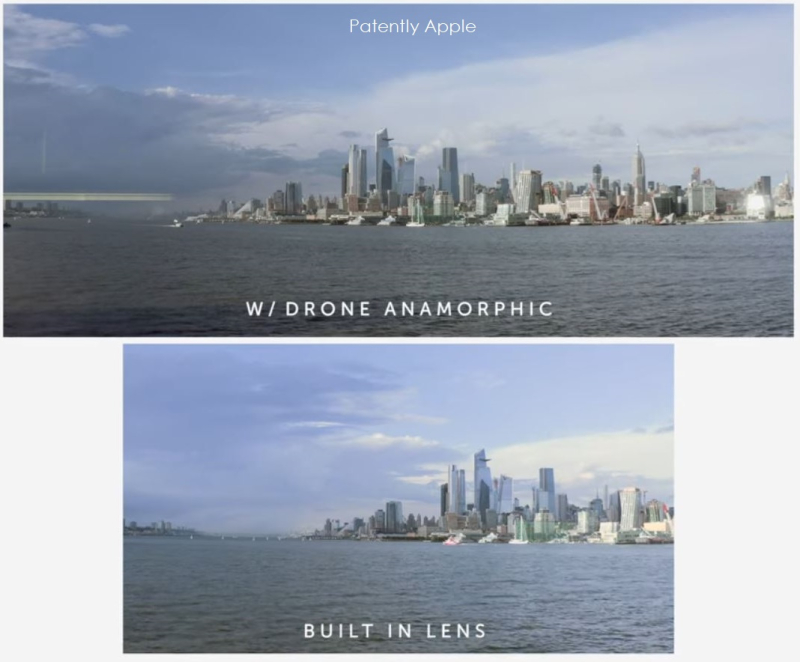 Apple's patent FIG. 1 below is a schematic side view of a LiDAR system with anamorphic optics. 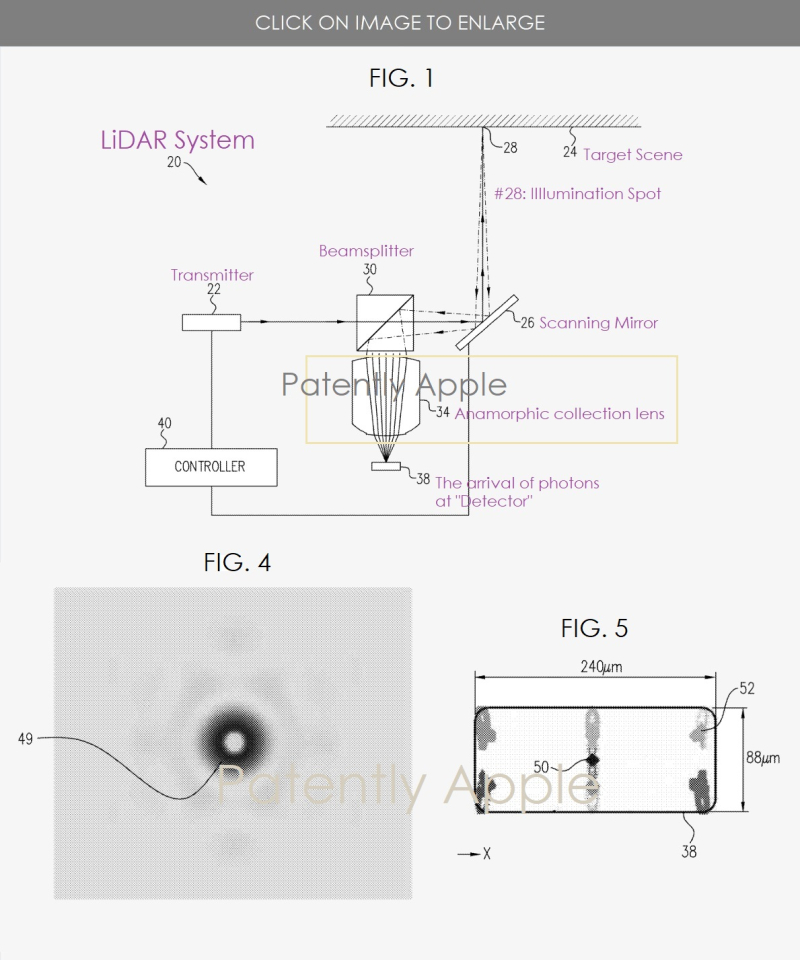 Apple's patent FIG. 4 above is a schematic representation of a point spread function (PSF) of the anamorphic lens; and FIG. 5 is a schematic frontal view of a detector used in a LiDAR scanner.

One more thing for interest sake. Bringing the anamorphic lens to Hollywood was a game changer as noted in a tiny segment of the video below.

While it may not be a game changer for Apple cameras, it will provide future Apple iPhone cameras with yet another advancement, especially for those shooting videos outside or while on vacation to give your shots that cinematic sharp and wide look and feel.

Apple's patent application 20200096615 is truly a technical patent. Unless you're an engineer in optics or a highly skilled technical Photographer, this isn't an easy read to be sure. If you want to still check it out the patent and see more patent figures, you could do so here.

While we can't guarantee when or how Apple will introduce this technology, even with a patent, our report tries to provide you with a range of applications that it could be associated with. The key to this invention is in the distance that shots could be taken with this combination of LiDAR with an anamorphic lens being up to hundreds of meters vs. 5 meters on the iPad Pro. This is where a drone comes in, but it could apply to any video application where the user is moving, be it in a car, van or boat where speed could be a factor.

Apple's patent which was published on Thursday was originally filed in Q2 2019 with some work on this invention dating back to 2018.

While some may argue that Apple's wide-angle cameras could do the same thing, there seems to be a slight difference in that your shot with an anamorphic lens emphasizes width alone whereas wide-angle lenses increase both width and height. The anamorphic lens also allows the photo or video to be slightly sharper because it's squeezing the photo into this format.  Below are two videos on this, with the later using an iPhone accessory anamorphic lens.

Interestingly both Yuval Gerson and Alexander Shpunt that are listed in this patent filing as inventors both came to Apple via their acquisition of PrimeSense. These engineers were largely involved in bringing Apple's TrueDepth camera to iPhone X and beyond for Face ID. Shpunt was the CTO of PrimeSense while  Gerson was an advanced technology researcher who is now a Microelectromechanical systems (MEMS) Architect at Apple.

The PrimeSense inventors were able to shrink a depth camera small enough to become the TrueDepth camera for the iPhone X Face ID feature. Introducing a LiDAR scanner with an anamorphic lens should be easy for these engineers.

Another Apple inventor listed on this patent filing is Andrew Sutton who is a "Technologies Development Engineer" who works on transitioning research to development.