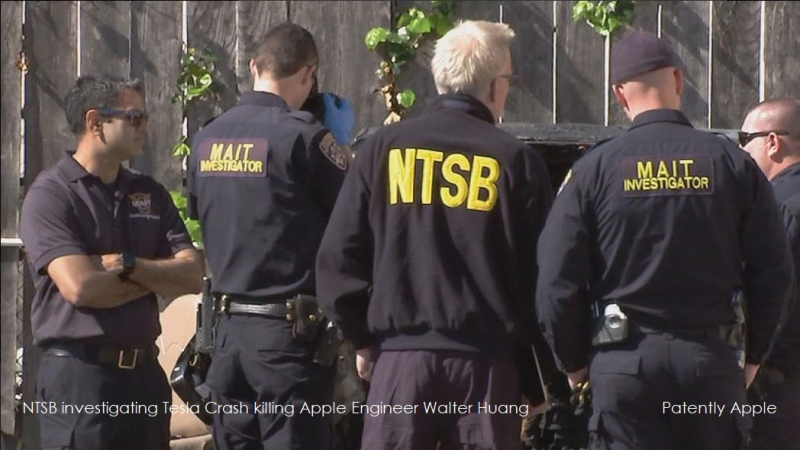 On March 29, 2018 Patently Apple posted a report titled "NTBS Investigating Tesla Crash Suspected of being on Autopilot Killing Walter Huang, a new Apple Engineer." The young Apple engineer had reportedly complained to the dealer leading up to the accident that his Tesla was having trouble navigating the same area where he eventually was killed at. Almost two years later the NTSB held a hearing earlier today with the National Transportation Safety Board (NTSB) called out Tesla for neglecting driver safety.

The National Transportation Safety Board slammed Tesla at a hearing on Tuesday for failure to prevent sometimes deadly misuse of its Autopilot advanced driver assistance systems, which are now standard in the company’s electric cars.

The NTSB said that although Huang was a distracted driver, Tesla’s forward collision warning system did not provide an alert, and its automatic emergency braking system did not activate as his Model X SUV with Autopilot switched on accelerated into a highway barrier.

A vice chairman for NTSB, Bruce Landsberg, called Tesla’s Autosteer “completely inadequate,” during the hearing. Autosteer, a beta feature of Autopilot, is supposed to keep the vehicle in its lane when cruising at highway speeds.

Sumwalt also said that his office had reached out to six automakers in 2017 with recommendations to improve the safety of their semi-autonomous driving systems. Five of them answered to NTSB agreeing to make some improvements, he said. "Sadly, one manufacturer has ignored us, that manufacturer is Tesla."

Among other things, the office wants Tesla to improve its driver engagement monitoring systems. Tesla relies on sensing a driver’s hands on the steering wheel to know if they are attentive enough to the road while using Autopilot features. Other auto makers use cameras to ascertain whether a driver’s eyes are on the road.

While the NTSB investigates accidents and can make safety recommendations, only its counterpart within the Department of Transportation, NHTSA, can order a recall of vehicle models, parts or systems that they deem defective and unsafe.

While 99% of the fault rests with Tesla, it was a little disappointing that Apple had to tell CNBC that "We expect our employees to follow the law." They must have said that as a defensive move in case they're sued by the Huang family. However, it just came across as  a cheap shot at a former employee who died in a horrific crash.

Patently Apple posted a patent report Patent on March 29, 2018 titled "Patent of the Decade: Apple Reveals an Unbelievable VR Experience System for Next-Gen Autonomous Vehicles." Apple is clearly designing a system that against the law by allowing drivers to put on a headset and go into La-La Land while the autonmous vehicle is in use.

For Tesla to say their autopilot feature relies on sensing a driver’s hands on the steering wheel to know if they are attentive enough to the road while using Autopilot feature and uses cameras to ascertain whether a driver’s eyes are on the road, is insane. So why does Tesla market autopilot if the driver is really driving the car. It's just cruise control not autopilot if your hands have to be on the steering wheel and your eyes on the road.

Autopilot suggests that the driver could technically read a book while being driven to work like having a private chauffeur. Clearly this feature was oversold to Walter Huang.  I hope huang's family lawyer will be able to make Tesla pay dearly for being negligent.