Apple wins a Project Titan patent relating to a next-gen Glass Fastening system for a windshield, a sunroof & more

Apple's Project Titan is one of Apple's most secretive long-term projects that relates to reinventing vehicles for the electric car era where semi-autonomous and fully autonomous vehicles will be common. Some of the advancements that Apple is making were important enough for 2 Chinese nationals have been arrested trying to leave the U.S. with Apple schematics and photos of sensitive new inventions.

Patently Apple has created a Project Titan patent archive that contains over 50 inventions thus far. I'm amazed at the scope of the inventions as it appears that there's nothing that Apple isn't trying to reinvent for future vehicles and today's granted patent is another example of this. Today's granted patent covers a new way to apply next-gen laminated glass windshields and other windows in a vehicle.

In Apple's patent background they note that laminated glass, or safety glass, is traditionally formed by bonding either a polyvinyl butyral (PVB) or ethylene-vinyl acetate (EVA) interlayer between two layers of glass. A thin film or layer of PVB or EVA can be placed between two layers of glass, a vacuum can be applied to remove air from between the various layers, and then heat and/or pressure can be applied to bond the layers together, for example, using an autoclave.

Laminated glass can be used to dampen sound transmission and increase the level of safety in architectural and automotive applications, for example, to deter shattering of windows during a hurricane or dampen sound entering through the windows of a passenger compartment of a vehicle.

The glass fastening and sealing systems described below can be implemented in automotive applications, for example, to increase the transparent area of glass surfaces in a vehicle such as the windshield, door windows, backlight, or roof. 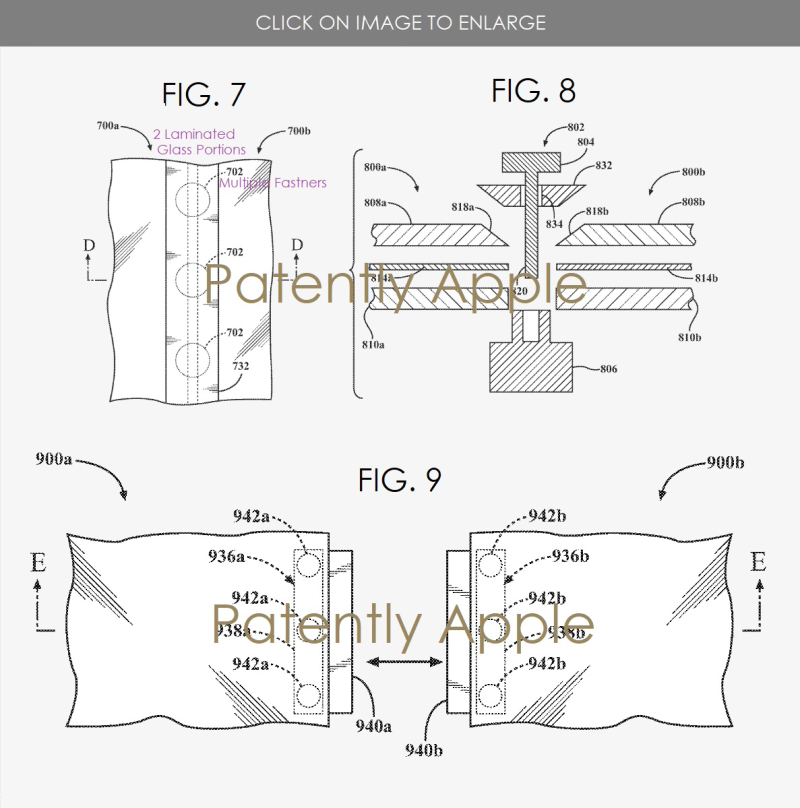 Apple's granted patent 10,562,274 was originally filed in Q1 2017 and published today by the US Patent and Trademark Office.