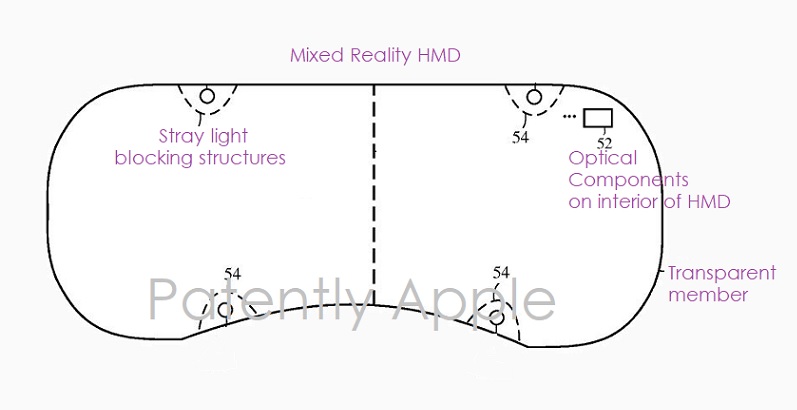 Today the US Patent & Trademark Office published two patent applications from Apple that relate to their future Mixed Reality Head Mounted Device. In the first patent, Apple has invented a transparent member that sits over the face of the headset that when dark is used to view content like games and when the transparent member is clear, it allows the user to view the real-world environment that could be augmented.

Apple notes that challenges can arise in incorporating optical sensors into electronic devices such as a Head Mounted Device (HMD). If care is not taken, stray light from a light-emitting device can create noise for a light-detecting device. This can adversely affect optical sensor accuracy.

Sensors may be used to make measurements of the environment surrounding a user of the head-mounted device. In some configurations, displayed images may be overlaid on top of real-world images. Transparent members may also be incorporated into handheld devices and other equipment.

FIG. 3 is a front view of member 30 in an illustrative configuration in which device 10 includes optical components such as component 52. There may be any suitable number of components #52 in the HMD device from one to fewer than 25. 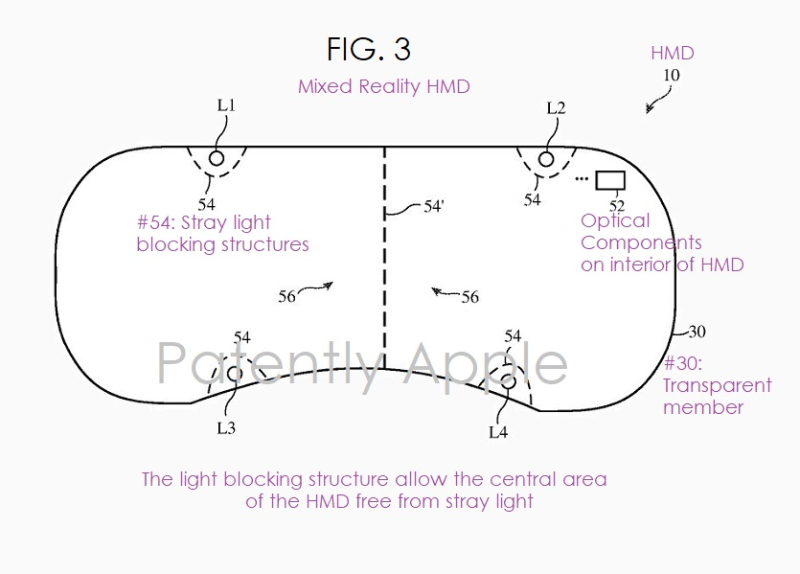 When structures #54 are incorporated into transparent member #30, stray light from a light-emitting device is blocked (e.g., redirected and/or absorbed) before interfering with the measurements made by a light-detecting component, thereby enhancing sensor performance.

When the user isn't viewing content (a game, 3D content) the transparent member could be clear allowing the user to view the real-word environment that they're in.

In virtual reality arrangements, the HMD may include lenses or other optical system components and a display such as display to provide virtual content to a user (e.g., still and/or moving images such as computer-generated content, etc.).

In augmented reality arrangements, a forward-facing camera (e.g., a camera supported by the housing and/or member #30) may gather images of the real world for presentation to the user's display.