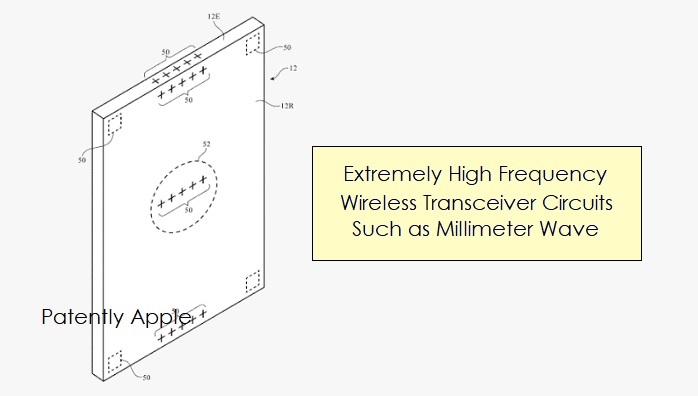 Apple has filed a number of patents covering a Millimeter Wave Antenna and two of them are here 01 & 02. In December Patently Apple posted a report titled "Qualcomm's President Ensures that Apple's first 5G iPhone is a Priority while admitting some Components will be Missing." One of the missing components seemed to point to the millimeter wave antenna.

The report further noted that "Apple will probably have to take some Qualcomm front-end components, because right now Qualcomm makes the only millimeter-wave antenna modules that work on Verizon and AT&T's 5G networks." That was a concern being that there wasn’t much time to test new antennas just for Apple.

In a new by Fast Company this afternoon we're learning that "Apple has decided to design the phone’s antenna itself." That's not shocking being that we know that Apple has been working on this key antenna for years.

However it must be said that Apple's own antennas have given user's grief in the past. Most famously, its antenna design in the iPhone 4 was blamed for dropped calls when you held the phone in a certain way. Another more recent Apple antenna design required twice as much power as comparable antennas to produce the same amount of radio signal, our Fast Company source said.

It’s a bad time for another Antennagate. A lot is riding on the success of the first 5G iPhone. In a year in which Apple hopes to return to iPhone sales grown, it’s depending on 5G’s fast connection speeds to convince many of its current customers to upgrade. And 5G performance is totally reliant on the antenna.

The antennas required for millimeter-wave (mmwave) 5G devices are harder to design than other kinds of antennas. Because these antennas send and receive higher frequency signals than earlier generations, our source said, there’s less room for error in their design and manufacture. A slight imperfection in an antenna coming off the production line might lead to connection problems later on.

The report definitely gives you the impression that no one knows at this point in time which way Apple will go and that it'll go right down to wire. For more on this, read the full Fast Company report.

With so much riding on a true 5G iPhone launching this year, it's a little hard to swallow that Apple is still debating which direction to take with millimeter wave antennas for this year's 5G iPhones. If you think differently, comment on our report on Twitter.