Video Conference: Barr Clarifies that 'Apple has not given any substantive assistance' in the Shooting Case in Pensacola Florida 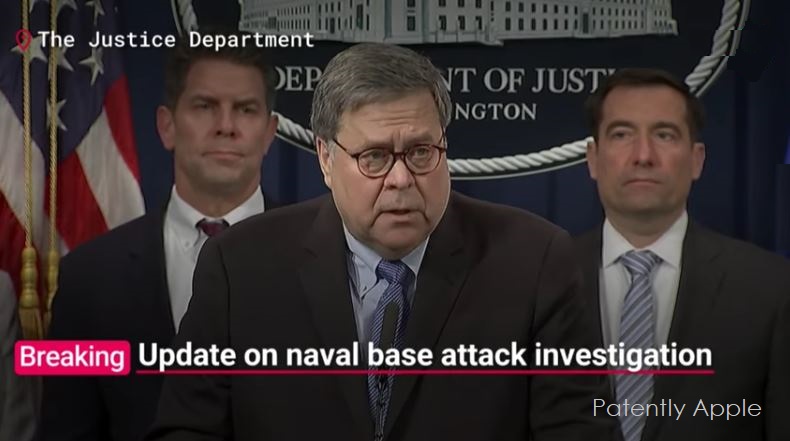 The video of the press conference by Attorney General William Barr and the Director of the FBI below has been set to specifically begin at the 5:10 mark where Barr introduces Apple into his news conference regarding the Dec. 6 shootings at the Pensacola Naval Air Station in Florida. This segment ends at the 6:52 mark, though the conference continues.

Attorney General William Barr: "Finally I want to address an issue regarding the shooter's phones. The shooter possessed two Apple iPhones seen here on the posters. Within one day of the shooting, the FBI sought and received court authorization based on probable cause to search both phones in an effort to run down all leads and figure out with whom the shooter had been communicating. During the gun fight with the first responders, the shooter disengaged long enough to place one of his phones on the floor and shoot a single round into the device.

It also appears that the other phone was damaged. Our experts at the FBI crime lab were able to fix both damaged phones so that they are operational. However both phones are engineered to make it virtually impossible to unlock without the password.

It is very important for us to know with whom and about what the shooter was communicating before he died. We have asked Apple for their help in unlocking the shooter's phones. So far Apple has not given any substantive assistance.

This situation perfectly illustrates why it is critical that the public be able to get access to digital evidence once it has obtained a court order based on probable cause. We call on Apple and other technology companies to help us find a solution so we can better protect the lives of American people and prevent future attacks."

Deputy Director of the FBI Dave Bowdich: "I want to echo the General Attorney's point about the challenge law enforcement faces from default user controlled encryption. The FBI continues to work with our private sector partners to find the right solution for accessing the digital evidence we need to stop criminals and terrorists alike.

We're not trying to weaken encryption to be clear, and after all data security is part of our mission. But even with a court order to date we cannot access the contents of the two phones that the Attorney General referenced previously in this investigation. And countless devices in other investigations. We want to work together with the private sector companies so we can lawfully access the evidence and information we need to keep our country and its citizens safe.

This is not a problem that only the Federal Government has, this is a problem that affects our state and local partners as well as many of our international partners and we talk about this on a daily basis. We need to continue to work together between public and private sector to find a solution to this very challenging problem."

In the Q&A segment of the press conference Barr was asked if they would be taking Apple to court. Barr stated "I'm not going to comment on that." Interpret that as you may.

It should noted that many in the media such as the LA Times and others used inflammatory bylines irresponsibly to characterize Barr's comments about Apple. The LA Times byline read: "Barr blasts Apple for not helping unlock Pensacola shooter’s iPhones." No, Barr did not "blast Apple." Barr simply stated that "So far Apple has not given any substantive assistance." There was no blasting, yelling or any such manner of communications.

Apple's Response to Barr's Characterization of Apple's role in the investigation

Apple's chief privacy officer Jane Horvath who attended the CES 2020 panel on privacy stated that said that Apple has a team working around the clock to respond to requests from law enforcement. But she said she doesn’t support building so-called back doors into software that would allow law enforcement elevated access to private data to solve crimes like terrorism.

It's that kind of flippant commentary that inflames the FBI and others in Law Enforcement. It's this kind of commentary that will eventually have the government force Apple to reinvent their encryption so that Apple will have to comply with court orders in the future, whether Horvath likes it or not.