Home Archives Contact Us Subscribe Twitter Facebook MeWe Parler Patently Mobile
With Apple never Complying with the EU's request to use a common Charger standard, the EU is now Preparing to Force Compliance
Video Conference: Barr Clarifies that 'Apple has not given any substantive assistance' in the Shooting Case in Pensacola Florida

IDC reported late this afternoon that the worldwide market for traditional PCs, inclusive of desktops, notebooks, and workstations, finished an impressive 2019 with fourth quarter growth of 4.8% year over year. Global shipments during the quarter beat forecast expectations at just under 71.8 million units, the highest single quarter shipment volume in four years (4Q15).

Even with Apple's CEO being upbeat during their last conference call stating that "the active installed base of Macs again reached a new all-time high," Apple ended the year with IDC showing Apple as ending the year in negative territoy for Macs compared to their competitors Lenovo, HP and Dell who showed decent growth.

IDC reported that Apple's Mac volumes saw a decline in 4Q19 with 4.7 million units shipped, down 5.3% year over year. Apple's continued momentum in the iPad and iPhone space have more than offset its challenges with Mac volumes, however. Shipment volumes were also down 2.2% for the full year 2019. 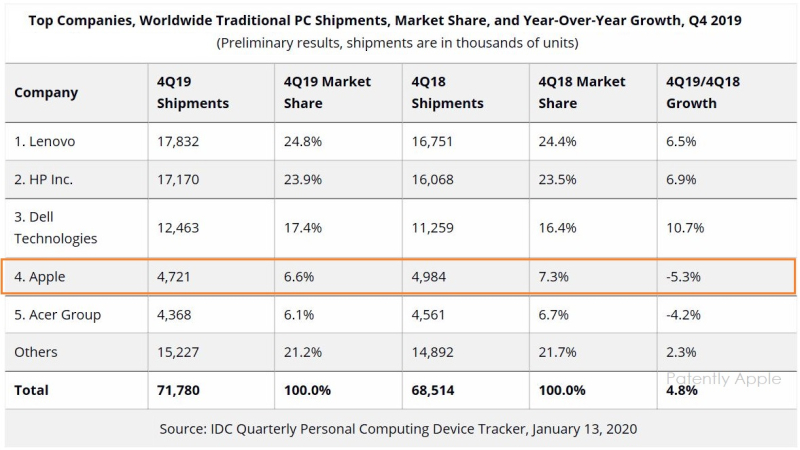 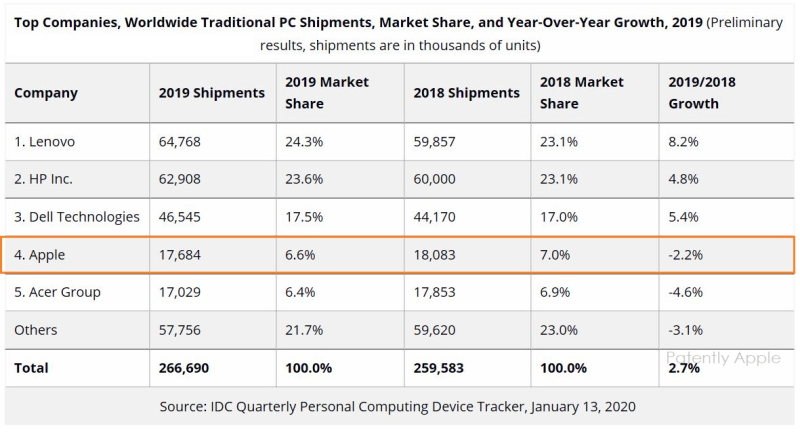 Overall, IDC reports that "This past year was a wild one in the PC world, which resulted in impressive market growth that ultimately ended seven consecutive years of market contraction," said Ryan Reith, program vice president with IDC's Worldwide Mobile Device Trackers. "The market will still have its challenges ahead, but this year was a clear sign that PC demand is still there despite the continued insurgence of emerging form factors and the demand for mobile computing."

The holiday quarter capped an impressive run for PCs in 2019, where three out of four quarters delivered year-over-year growth. The storyline in the commercial sector for most of the year was around the momentum driven by businesses transitioning PCs over to Windows 10 before the end of support for Windows 7 arrives in January 2020.

The continued business push specifically helped the top 3 players – Lenovo, HP, and Dell – to further consolidate their hold on the market with a combined share of just over 65% in 2019 (up from 63% in 2018). In addition, the impact of several other market challenges declined in the quarter. Concerns about CPU availability continued but were helped by the adoption of AMD CPUs while signs of easing trade tensions and other industry drivers helped to increase market uptake for the most important quarter of the year.

"Despite the positivity surrounding 2019, the next twelve to eighteen months will be challenging for traditional PCs as the majority of Windows 10 upgrades will be in the rearview mirror and lingering concerns around component shortages and trade negotiations get ironed out," said Jitesh Ubrani, research manager for IDC's Worldwide Mobile Device Trackers. "Although new technologies such as 5G and dual- and folding-screen devices along with an uptake in gaming PCs will provide an uplift, these will take some time to coalesce."

IDC pointed to Canada being a hot market in 2019. According to the report, the traditional PC market grew for the 14th consecutive quarter as commercial markets continued to do the heavy lifting. Desktop shipments easily surpassed expectations posting an impressive 15.0% year-over-year gain.

For more on individual countries and companies beyond Apple, read the full IDC report here.

Gartner released their PC shipment report this afternoon as well and they provided an additional set of statistics covering USA Only shipments for Q4 2019. In this chart, Apple is seen as delivering 0.8% growth, barely into positive territory. In the USA market it was Microsoft coming in as the only loser with a crushing -16.4% for Surface PC's.

What makes the data on Microsoft so devastating is that Gartner gives Microsoft a huge advantage. Gartner notes at the bottom of their stats that "Data includes desk-based PCs, notebook PCs and ultramobile premiums (such as Microsoft Surface), but not Chromebooks or iPads.

This distorts all of Gartner's PC statistics because they count "ultramobile premiums" as PC's for HP, Dell and Lenovo while Apple is unable to count the iPad. If Apple would be  granted the same privilege, Apple would be number one in PC's with a massive lead. 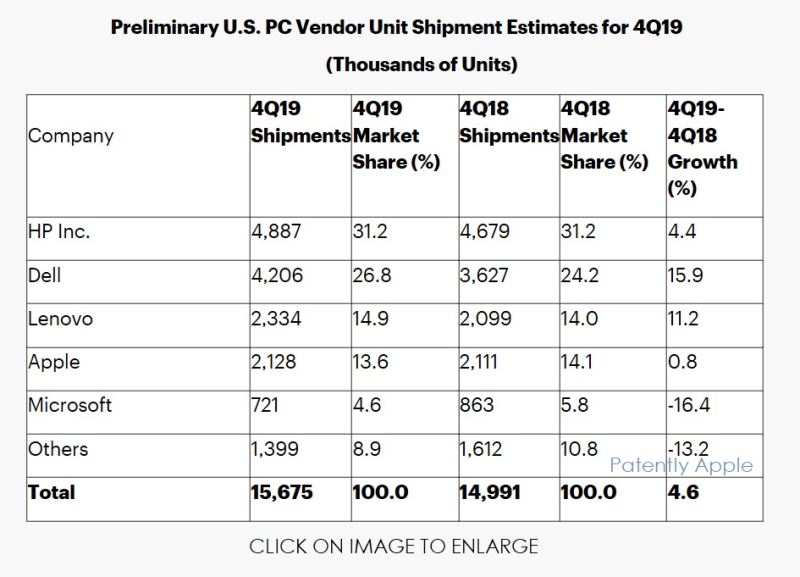 To review more of Gartner's PC stats report that differs from the IDC report, click here.