On December 29, Patently Apple posted a report titled "Microsoft Files Patent for an iPhone Dock with a Large Rear Speaker supporting Skype Conferencing." Today we're reporting on a Microsoft granted patent covering a possible future Surface Smart Speaker with a built-in projection system that could act as an easy to use Skype conferencing device not requiring a PC, Mac or iDevice. Considering that their Skype dock that we covered last week was designed for the iPhone, there's a high probability that Microsoft's smart speaker system supporting Skype could likewise be marketed to Apple fans.

Smart Speaker with a Projection Unit

In late October the U.S. Patent Office Granted Microsoft patent 10,462,421. Patently Mobile covered this invention first as a patent application back in 2017 titled "A Microsoft Patent Reveals a Highly Advanced Home Automation Device that's Miles ahead of Amazon's Echo. You could check out our original report for more details about their now granted patent.

In our cover graphic above you can see Microsoft's patent FIG. 2 on the left which is a schematic diagram of a room with a projection unit on a table. The projection unit is seen projecting an image of a person that the user is in a Skype conference with onto a wall in the room.

On the right of our cover graphic is patent FIG. 3 providing a better view of the concept where the camera is set into an independently rotatable cylinder module that can rotate the camera and pico projector to ensure that the image of the caller is always in-line with the receiving user sitting or standing so that it's an eye-to-eye connection. 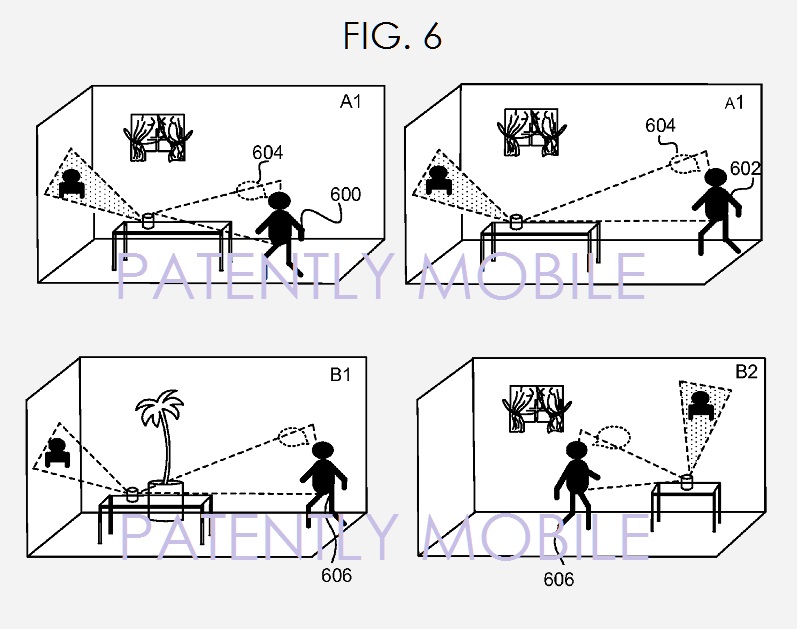 One of the cameras that will be included in the system is a depth camera, and by the sound of it, one that is more powerful than Apple's Face ID to capture images of the people and background in the shot in real time construction.

Microsoft further states in their granted patent that the scene reconstruction module comprises software and/or hardware which receives depth and/or color image data from the rotating capture module and computes characteristics of surfaces in the environment such as 3D position, size, texture, color, reflectivity, intensity, position with respect to other surfaces in the environment.

For example it may compute a 3D reconstruction of surfaces in the environment by combining data from frames of depth image data in sequences of frames captured by the depth camera. The 3D reconstruction may comprise a truncated signed distance function or other representation of a surface.

The camera system also includes a gaze tracker that is able to comprise body part or skeletal tracking technology such as increasingly used with depth cameras and/or color cameras. The gaze tracker detects the 3D pose of a user's head using the body part or skeletal tracking technology, where the 3D pose is a six degree of freedom parameter indicating 3D position and orientation.

For the record, Microsoft was also granted two design patents in September for entry level styled smart speakers that could go head-to-head with entry models from Google and Amazon. So it would appear that Microsoft is taking a holistic approach to this future Surface device category.