Looking back, Apple's CEO Tim Cook beat the Naysayers of 2011 by growing Apple's stock about 480% since that time 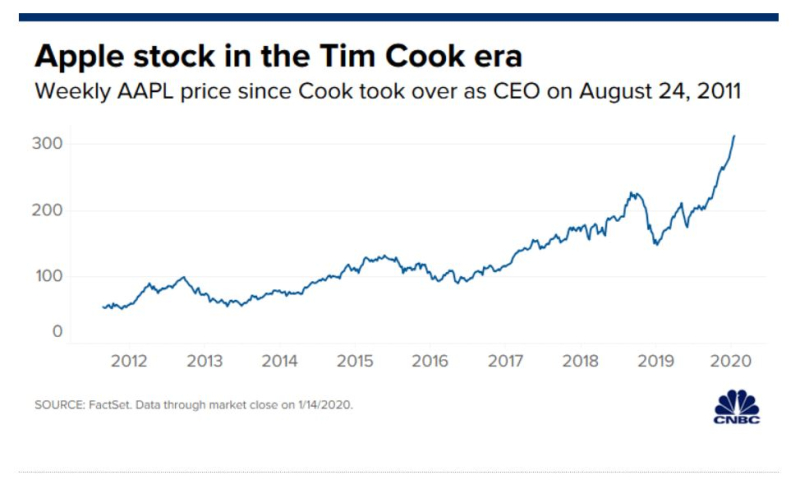 According to some, Apple was in a bit of a tough spot shortly after Tim Cook took over as Apple’s CEO. After the death of Steve Jobs in 2011, critics began questioning if the company could continue to produce breakthrough products like iPod, iPhone and iPad. That pessimism continued into 2012 and 2013 as rivals like Samsung pushed forward with iPhone alternatives that had bigger screens and wild features.

Apple was doomed, according to the naysayers. The company lost its spiritual leader, and an "operations" guy like Cook didn’t have the instincts to create another disruptive product. The company continued to beat earnings expectations, but the longer term outlook didn’t look great.

The naysayers, for the most part, were wrong.

Apple under Cook hasn’t invented a new, game-changing product like the iPhone. Instead, he’s leveraged the iPhone’s success into new areas of growth.

Under Cook, the iPhone has become the linchpin for the entire Apple ecosystem. Even though unit sales have fallen over the last couple years, the company has built a compelling system of accessories and services around it.

Cook has convinced investors that its story reaches far beyond how many iPhones it can sell each quarter.

Apple’s stock is up about 480% since Cook took over in August 2011. It became the first publicly traded company to reach a $1 trillion market cap in 2018.

And even after a rough start to 2019 when Apple shocked investors by revising its holiday quarter guidance down, the stock completely recovered by the end of the year, blowing past a $1 trillion market cap once again. It’s up about 45% since the unveiling of the iPhone 11 last September, adding about $400 billion in market value. To put that in perspective, Apple added the value of more than four Teslas in just four months.

The CNBC report goes on to touch on  Growing the iPhone; Services; wearables and 5G optimism. For those interested in knowing more of this story, read the full CNBC report here.