Consumers in the United States spent more than $4.6 billion in the top 100 non-game mobile apps offering subscriptions during 2019 with Apple coming out on top with more than 3X the sales as Google Play.  Overall, the data shows a 21 percent year-over-year growth from the $3.8 billion generated by the top 100 subscription apps in the U.S. during 2018.

When looking at the U.S. App Store specifically, Sensor Tower data found that users spent $3.6 billion in the top 100 subscription apps on that platform during 2019, representing 16 percent Y/Y growth from the $3.1 billion spent in 2018. The 2019 total was 24 percent of the $15.3 billion the store generated from user spending overall last year. 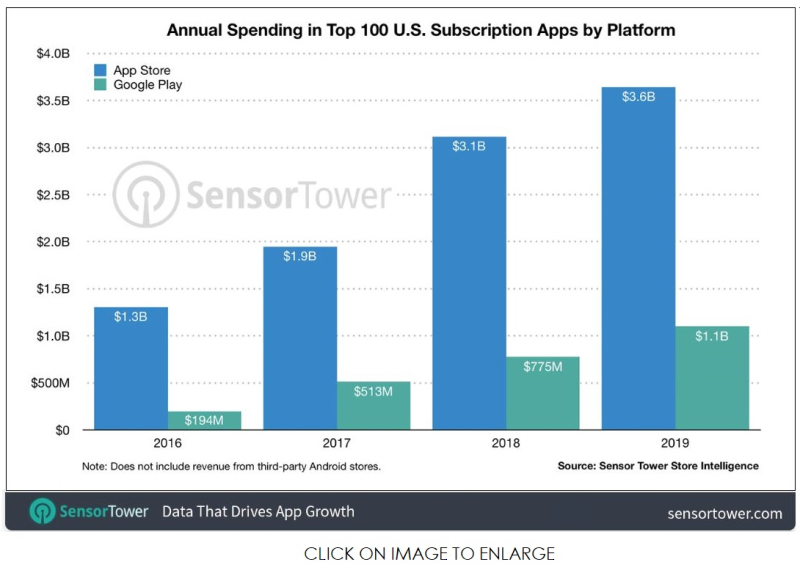 YouTube was the App Store subscription app leader, with its most popular in-app purchase being legacy payments made through existing subscriptions to YouTube Red (later renamed to YouTube Premium, which is its second-most popular purchase).

Meanwhile, U.S. Google Play users spent more than $1.1 billion in the top 100 grossing subscription apps on that platform for 2019. Although only accounting for 13 percent of the $8.7 billion spent on the platform overall, spending in these apps represented a notable 42 percent Y/Y increase from the $775 million spent in 2018. For more on this, read the full SensorTower report.