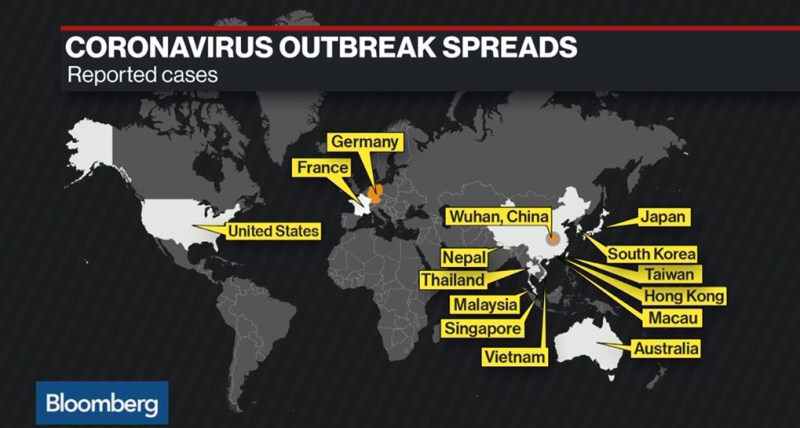 Earlier yesterday Patently Apple posted a report titled "At Present, Rumors of an iPhone Production Slowdown at a Foxconn plant due to the Coronavirus could be over Exaggerated." The Nikkei stated that iPhone orders in the first half of 2020 "might be delayed due to the virus outbreak."

Our report further noted that "While the situation in China over the coronavirus is fluid, at present, the concern over iPhone production in Wuhan possibly effecting iPhone production would appear to be a little exaggerated."

The report concluded by stating "Stay tuned to Apple's financial conference call later today to see if Apple's CEO comments on any production problems at Foxconn and the Wuhan plant specifically," caused by the coronavirus.

In a follow-up report yesterday afternoon we noted that "After the release of their financial statement to the press, Chief Executive Tim Cook told Reuters the company was using a wider-than-normal prediction range because of the uncertainty created by the coronavirus outbreak in China.

Cook further stated that Apple had shut one store in China and reduced hours at others and is restricting employee travel due to the virus.

Cook added that "We have limited travel to business-critical situations as of last week. The situation is emerging and we’re still gathering lots of data points and monitoring it very closely."

Further, Cook stated that while they have suppliers in the Wuhan area, the heart of the outbreak, they have alternatives.

Our earlier report in the day pointed to the historical fact that the Foxconn factory in Longhua Town in Shenzhen produced the bulk of Apple's iPhones. So unless that factory is severely impacted by the coronavirus, iPhone production should be fine. Apple "alternatives" could also mean that Apple can shift to other OEMs like Pegatron or others to keep production in line.

It's understandable that there are a lot of ifs to consider until China can make progress in slowing down the spread of the virus and we had noted that the situation remained fluid.

It's only in hindsight that we'll understand the impact of the coronavirus. Media reports posting negative reports at how this will negatively impact Apple's iPhone production and future financials are a bit premature.

A new Bloomberg report today covers a key statement by Apple's CEO that is a little clearer than others as follows:

"We do have some suppliers in the Wuhan area. All of the suppliers there are alternate sources and we’re obviously working on mitigation plans to make up any expected production loss. With respect to supply sources that are outside the Wuhan area, the impact is less clear at this time."

This supports our earlier report yesterday pointing to Foxconn's plant in Wuhan not being the main iPhone plant but rather the plant in Shenzhen. Cook made that crystal clear by his statement covered by Bloomberg.

This was also confirmed today in a Chinese report by Caixin Global: "Virtually all of the world’s iPhones are made in China, primarily by Foxconn’s Hon Hai Precision Industry at its so-called iPhone City in Zhengzhou and by Pegatron at an assembly site near Shanghai. Each of those locations is more than 500 kilometers away from Wuhan in central China, the epicenter of the viral outbreak, but that distance doesn’t immunize them from its effects."

To further calm the matter, Bloomberg quotes Cook as stating that "After an extended Chinese Lunar New Year Holiday, factories are reopening on Feb. 10, rather than at the end of January." On Wednesday, Apple's main iPhone assembler Foxconn Technology Group confirmed all of its facilities will resume full-scale production starting Feb. 10." Unless that statement is updated to the contrary, it would appear that iPhone production will stay on track for Q2 2020.

Analyst Neil Mawston from Strategy Analytics weighed in with a cautionary  "what if" scenario, and you can read about that and more in the full Bloomberg report.

The Bloomberg business video below discusses the coronavirus in general and not specific to Apple.