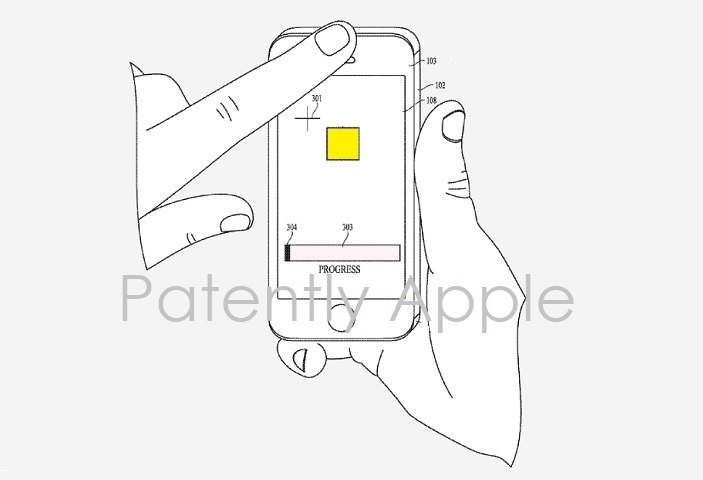 The U.S. Patent and Trademark Office officially published a series of 41 newly granted patents for Apple Inc. today. In this particular report we cover three of Apple's health related patents that all relate to various functions and systems of the Apple Watch and iPhone to measure heart health. In late September Patently Apple posted a report titled "On World Heart Day, Apple Executives talk about Apple Watch and Health Studies."

Earlier this year, Apple’s CEO Tim Cook commented on the importance of health to the company. In a statement that has been widely quoted, he said, "I believe, if you zoom out into the future, and you look back, and you ask the question, 'What was Apple's greatest contribution to mankind?', it will be about health."

Over the last few years Apple has focused on technologies to measure the heart's activity and today we take a look at three of Apple's newly granted patents that could make a difference in a user's health.

The US Patent & Trademark Office published granted patent 10,524,671 for Apple that shows how they want to take the iPhone to the next level for health as it relates to allowing users to measure their vitals.

To accomplish this goal, Apple's granted patent covers systems, apparatuses, and methods related to an iPhone (iPad, Apple Watch etc) that computes health data. The device may include a camera, an ambient light sensor, and a proximity sensor. The electronic device may use one or more of the camera and the proximity sensor to emit light into a body part of a user (such as a finger, and ear, and so on) touching a surface of the electronic device.

By way of illustration, electrical measurements may be taken via the electrical contacts 107a and 107b (which may respectively be configured as positive and negative terminals) that may be used to detect electrical activity of the user's body. Such electrical measurements may be used (in some cases along with analysis of the received light) to measure heart function, compute an electrocardiogram, compute a galvanic skin response that may be indicative of emotional state and/or other physiological condition, and/or compute other health data such as body fat, or blood pressure. 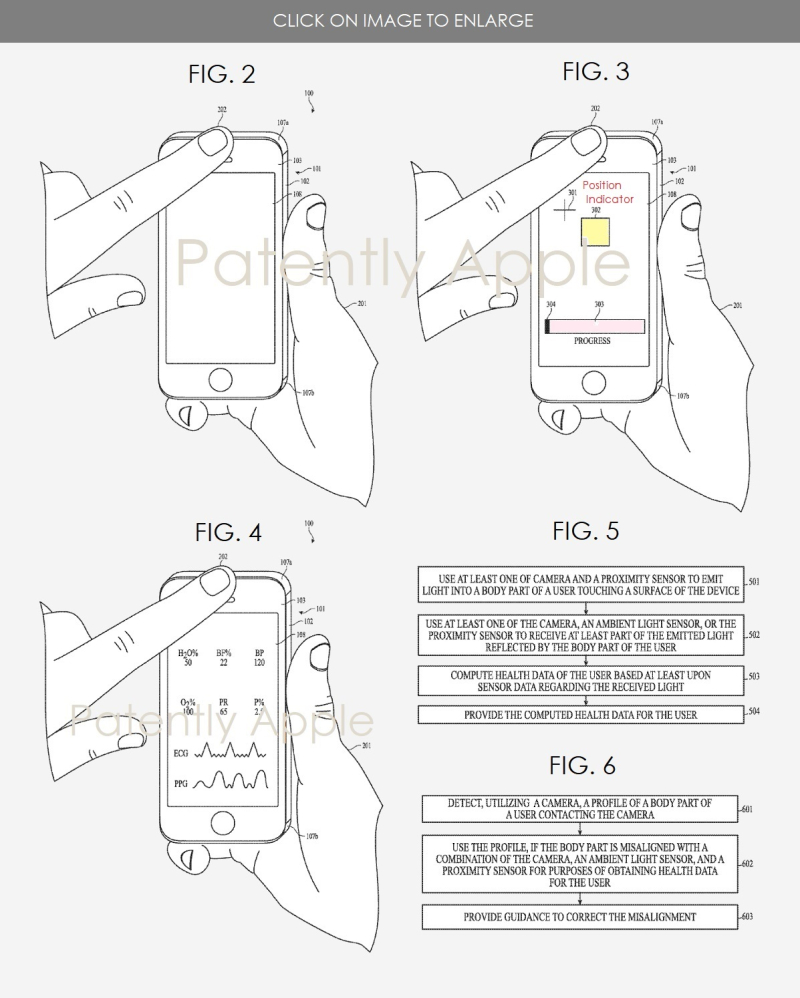 You could check out Patently Apple's original patent application on this invention posted in December 2017 here for more details.

Apple's newly granted patent 10,524,735 relates to devices (primarily Apple Watch and iPhone) and methods for identifying instances of events during which one or more predetermined characteristics or patterns occur in a physiological signal.

Specifically, it may be desirable to identify instances of certain irregularities in a physiological signal. For example, when a physiological signal, such as a PPG signal or an electrocardiograhy (ECG) signal, measures one or more aspects of a cardiac cycle over time, it may be desirable to look for one or more predetermined characteristics of a waveform of a heartbeat and/or a pattern of heartbeats, which may be representative of corresponding characteristics present in the cardiac cycle. 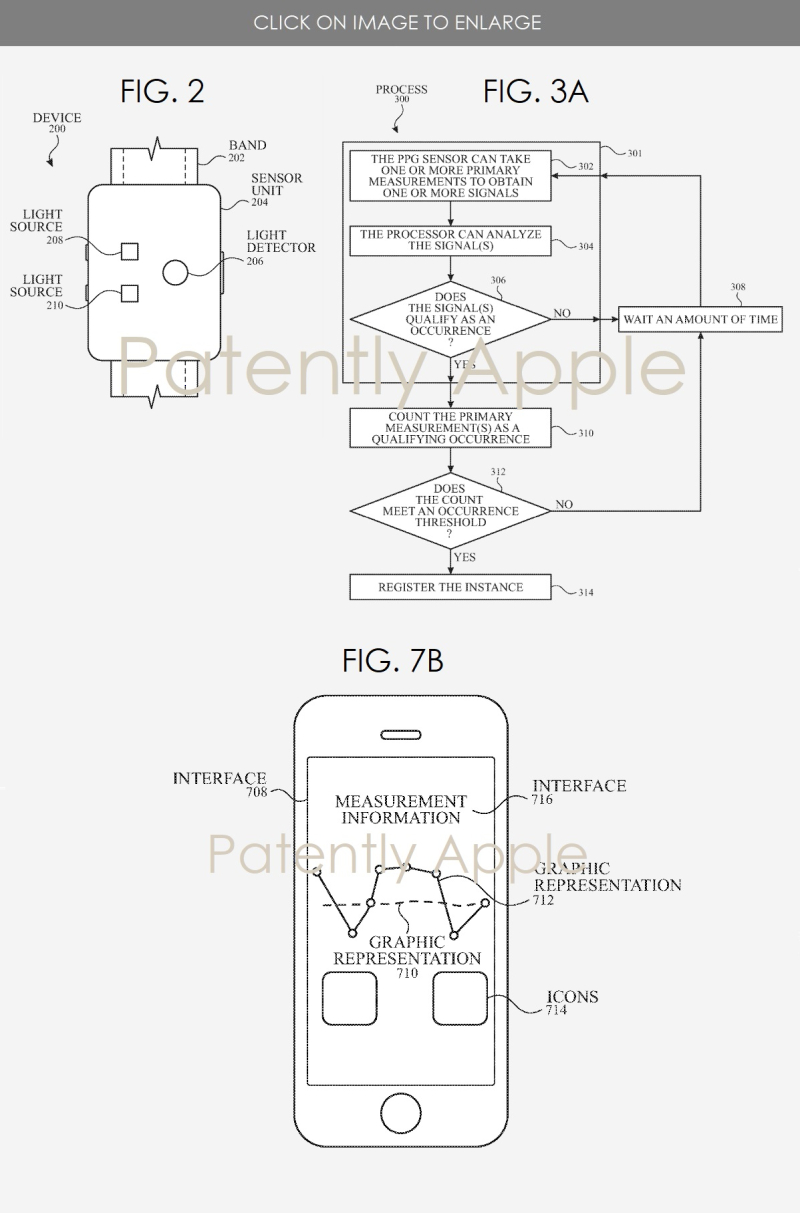 Further the Apple Watch may provide accurate, individualized calorimetry throughout a person's day, and across a variety of activities. Some embodiments may calibrate a fitness tracking device for an individual without necessarily relying on measuring {dot over (V)}O.sub.2, heart rate testing, or self-reporting about physical activity.

Furthermore, some embodiments may model calorie burn and perform calorimetry processes for sedentary and low-intensity activity (e.g., when not in an active exercise session), including sitting or standing.

In some embodiments, the heart rate sensor may include a photoplethysmogram (PPG) sensor for sensing heart rate. The PPG sensor can illuminate the user's skin using a light, such as a light-emitting diode (LED), and can measure changes in light absorption as blood is pumped through the subcutaneous tissue under the PPG sensor. The fitness tracking device can measure an individual's current heart rate from the PPG. The heart rate sensor may also be configured to determine a confidence level indicating a relative likelihood of an accuracy of a given heart rate measurement. 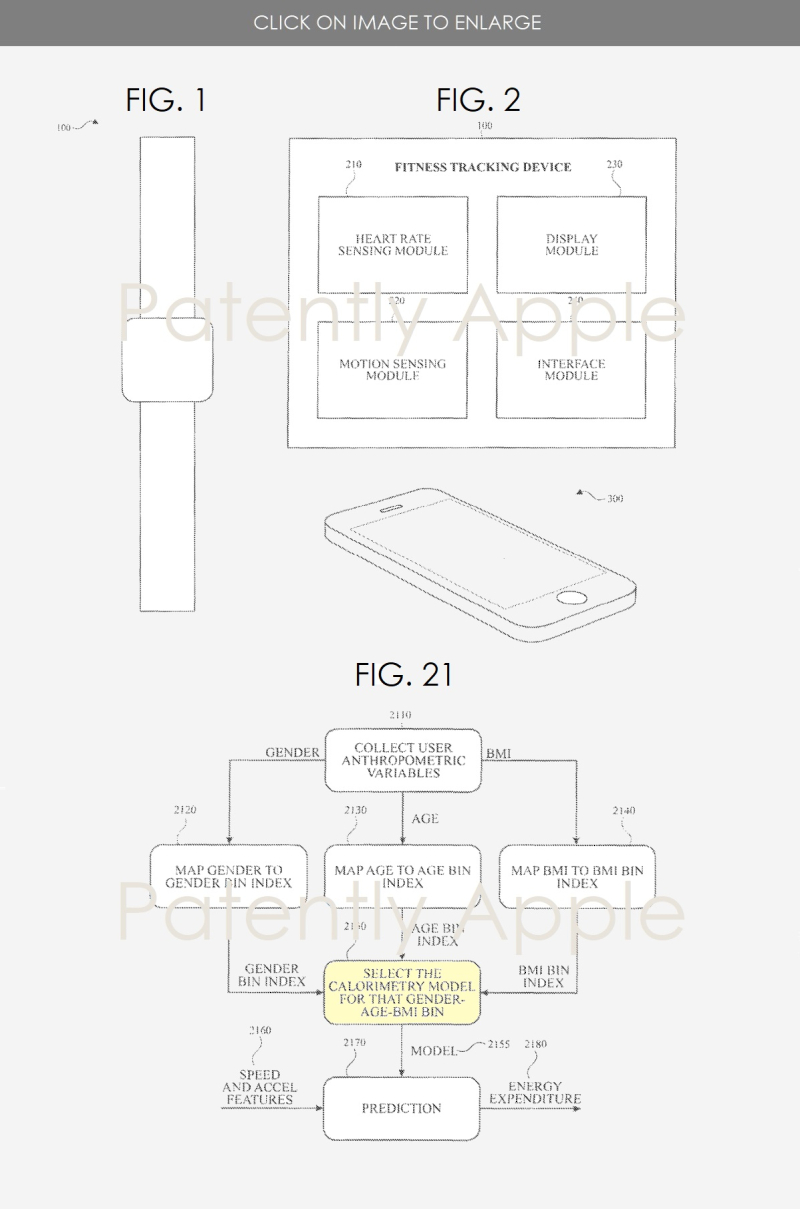