Future 'Magic Keyboard' may include Multiple Colored LEDs Supporting Gaming & other Application Functions." Today, the U.S. Patent and Trademark Office officially published a new granted patent on the same subject matter titled "Mixed input lighting using multiple light sources with switchable operational state." The one big difference in this granted patent from the 2015 patent is that the illumination system could extend beyond the keyboard and possibly be used in other future Apple products.

To provide improved user experience and increase potential for feedback to a user, it would be helpful to have keys of keyboards, or other input devices, with individually controllable variable internal illumination.

Apple's granted patent covers devices, systems and methods that implement variable internal illumination of input devices of electronic equipment. Input devices include keys of computer keyboards, contact areas on a contact pad (trackpad), buttons on instrument control panels, buttons on a computer mouse, and the like.

For example, the tone of the light emitted by one or more input devices may be varied to match more closely a tone of an ambient light in the electronic device's environment.

The image below isn't from the patent but from Hugh Jeffreys who has a video on customizing a MacBook Pro keyboard with colored lights. It's simply to give you a very rough idea of the colored lights on a future Apple keyboard. Of course the lighting system from Apple will be vastly superior. 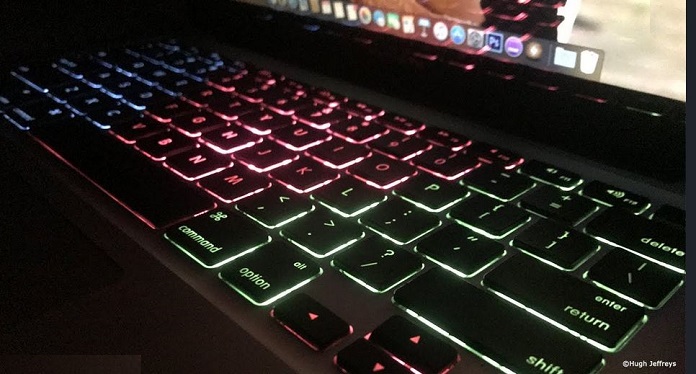 Apple's patent FIG. 1A below illustrates a desktop computer system that may incorporate the variable internal illumination system including a future Magic Mouse; FIG. 1B illustrates a future MacBook where the keys and trackpad could use this new system; FIG. 1C illustrates an instrument panel. More specifically, the panel may include two dedicated control keys #184 and #186 that may implement specific commands, such as automatic shutdown or toggle between measurement methods. The dedicated control keys may make use of LEDs with internal illumination 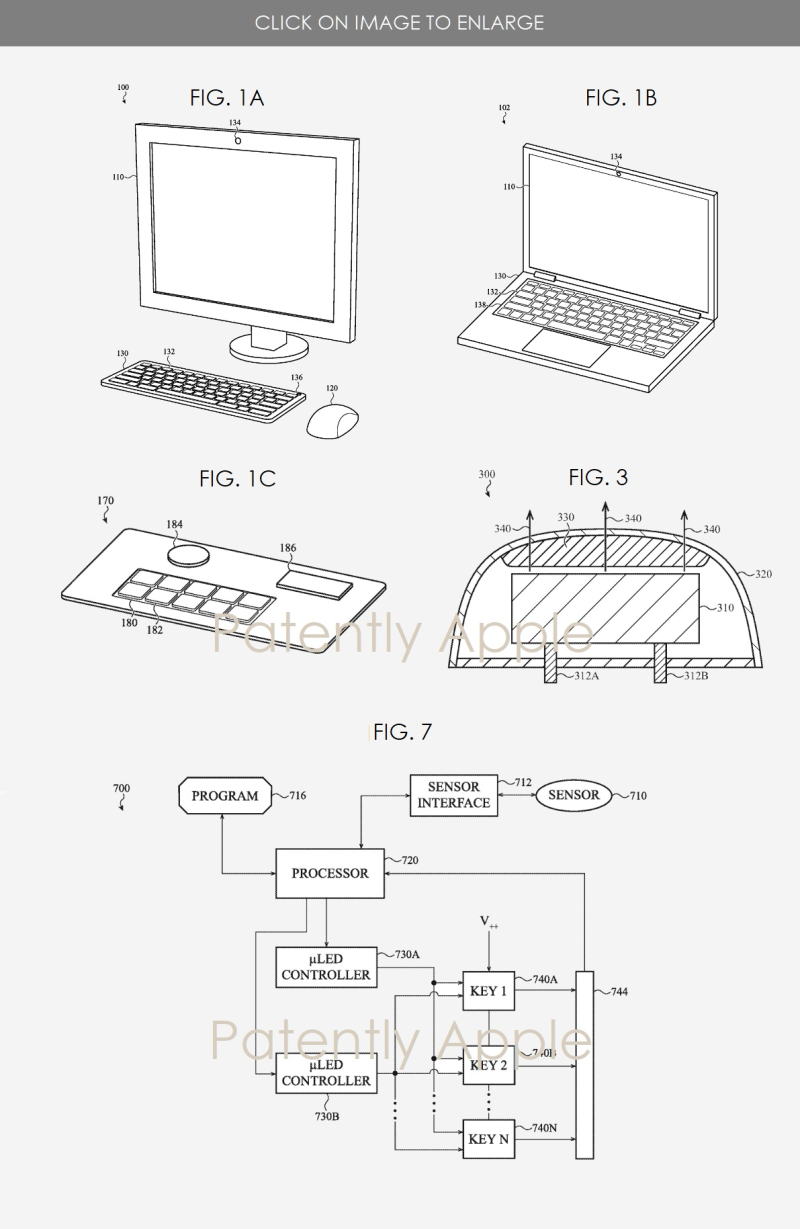 Apple's patent FIG. 3 above illustrates a cross-sectional view of a micro light emitting diode; FIG. 7 shows a block diagram of a sample circuit for controlling internal illumination of a keyboard having keys with LEDs.

Apple's granted patent 10,528,152 was originally filed in Q3 2017 and published today by the US Patent and Trademark Office.

Another Apple patent on this area of technology was covered by us in a 2014 report titled "Apple Rethinks the Keyboard with Gesture Controls & In-Key Displays to Support Pictograms, Symbols and Glyphs." So Apple has been on this project for many years.