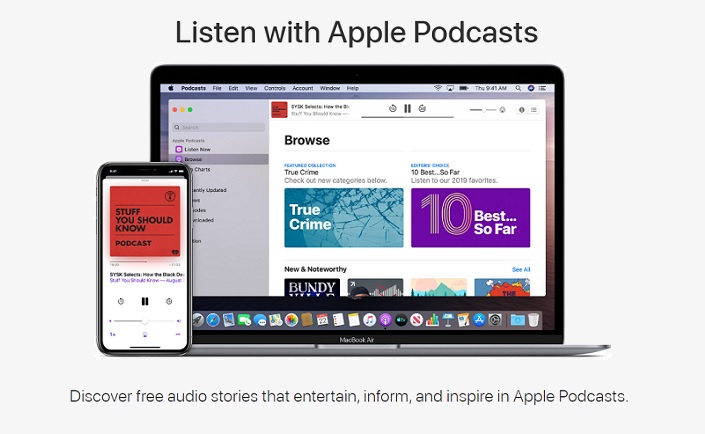 Podcasting is hardly a new business for Apple. The company is the dominant distributor of such programs in the U.S. and many international markets. More than half of all podcast listening happens in the company’s Podcasts app.

Apple's iTunes Store puts hundreds of thousands of free podcasts at your fingertips on iTunes. You could easily find and enjoy your next favorite on your iPhone, iPad, iPod touch, computer or Apple TV. From automotive to news, fitness to pop culture, there’s a podcast (or more) for everyone.

Although Apple is the Podcast leader, Patently Apple posted a report About a year ago titled "Spotify, the Streaming Music Champ Worldwide, now Seeks to Get into Apple's Face with new Podcast Services." Spotify acquired the popular podcast company 'Anchor' last year and has since spent more than $400 million on it's budding Podcast business while commissioning dozens of original podcasts exclusive to its service. Adding to that is the rumor covered by the Wall Street Journal (WSJ) claiming that the next big acquisition on their list could be "The Ringer."

The Ringer was launched in 2016 by Simmons, who brought along several editors who had previously worked with him on Grantland, an ESPN-owned blog he operated from 2011 to 2015. like the content on their website, the Ringer's podcast network covers both sports and pop culture. The flagship podcast, the Bill Simmons Podcast, is an interview show hosted by Simmons, featuring other Ringer writers and podcast hosts as well as athletes, filmmakers, comedians, and pop culture figures.

For now however, it's just a rumor put into motion by the WSJ.

Apple, that is the current leader in the Podcast universe, launched an Apple TV+ series last fall titled "Truth be Told," last fall that provided a unique glimpse into America’s obsession with true crime podcasts.

While the 'Truth be Told' series was set to be released in early December 2019, Apple had already been discussing the creation of original podcasts related to promote Apple TV+ programs.

According to Bloomberg, Apple had sent out a request for pitches last summer, asking podcast producers to pitch ideas for audio programs with some connection to its shows, one of the people said.

The company has since discussed making podcasts with producers of its original series, according to two of the people, who asked not to be identified because the plans aren’t final.

For more on this, read the full Bloomberg report titled "Apple Planning to Make Original Podcasts Promoting Its TV Shows," that could be found on its technology home page today.

If the report proves out to be true, then you have to wonder if Apple could also be thinking about promoting more than just entertainment, like The Next Great Thing.