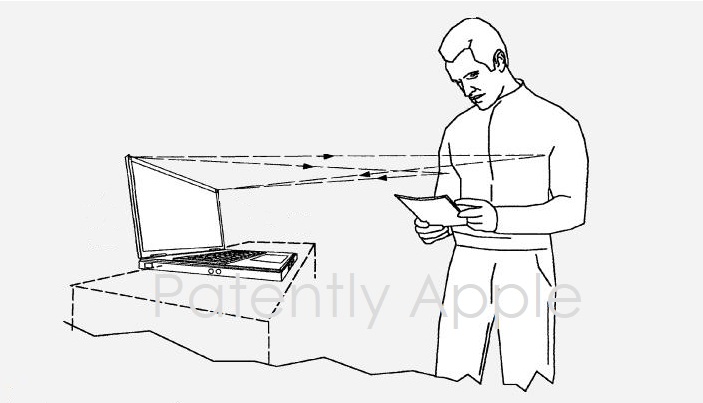 Going back as far as 2009 Patently Apple covered a patent report about Apple working on Presence Detection technology that could turn on or wake-up future MacBooks, iMacs, TV, appliances and more without the need of a user touching a key or using a password. It's been a long stretch since 2009 but a patent application from Apple on this same subject matter was made public last week by the U.S. Patent Office that advances their invention.

Apple's 2009 patent focused on sensors and infrared beams to detect presence so as to awaken a device quickly for a user while their latest patent filing uses both sensors and infrared beams, the latest invention also adds modernized technologies to awaken a device from sleep. One of the main features is using facial recognition up to 5 feet away. This would require their TrueDepth Camera to be updated.

On that specific point, Bloomberg reported a year ago that Apple was working to advance their TrueDepth camera that could work at 15 feet from the device in contrast to their current iPhone camera that works at 25 to 50 centimeters. So this week's patent pointing to detection working at 5 feet away is therefore realistic.

Apple's patent FIG. 2C below depicts a scenario in which data produced by the proximity sensor (#126-1) suggests that the user (#210) is approaching the MacBook (#102) and can be detected at 5 feet away. 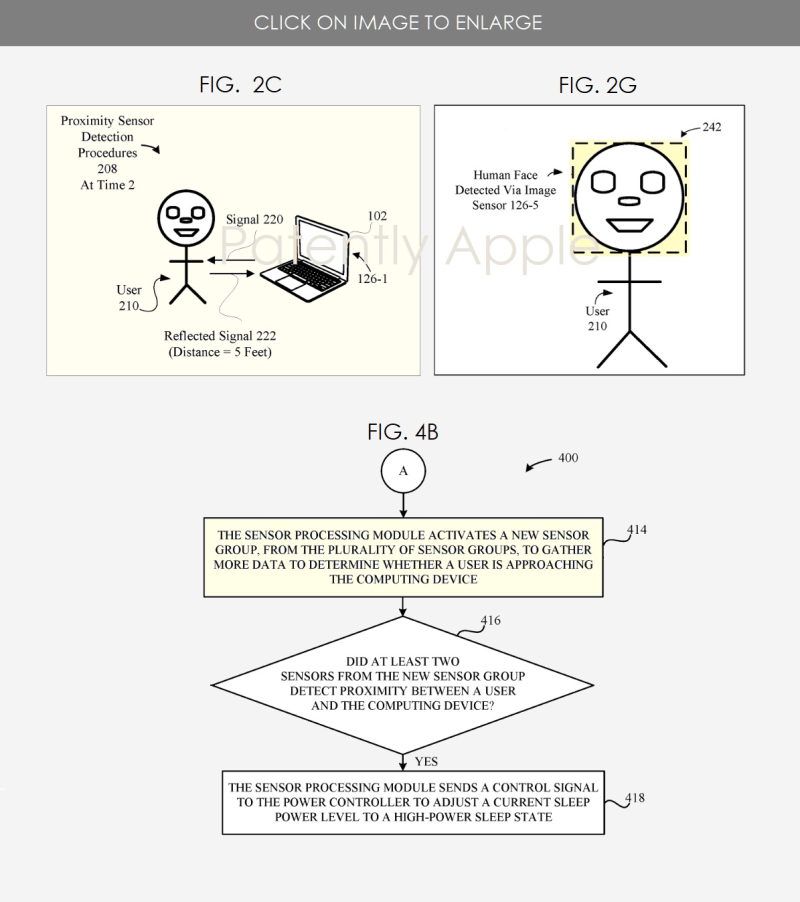 Apple's patent FIG. 2G above presents different graphical illustrations of additional sensor/device data that can be efficiently used to perform user proximity detections. As illustrated in scene #242, the image sensor #126-5 can analyze image data to detect the presence of a human (e.g., user 210) who is proximate to the MacBook #102.

For example, the image sensor #126-5 can detect the face of the user (#210) based on the eyes, nose and/or mouth of the user; and finally, FIG. 4B is a flow chart illustrating a method for adjusting sleep states of a computing device using onboard sensors coupled to the computing device.

Elsewhere in Apple's patent filing its noted that Siri could be set to stay on at all times so to detect movement in a room and accept voice commands to awaken a MacBook from sleep.

For interest sake, Apple notes that the term "proximity sensor," as applied in their patent filing, is not intended to be limiting and can include any device that emits one or more electromagnetic beams (e.g., infrared beams) that enable the proximity sensor to recognize changes in (1) the field or (2) by a return signal from an object within a detectable distance of the proximity sensor (e.g., via object deflection).

Proximity sensors can include, but are not limited to, capacitive sensors, photoelectric sensors, inductive sensors, and so on.

Also, it should be noted that the term "light sensor," as applied herein, is not intended to be limiting and can include any device that senses light or other forms of electromagnetic energy.

Further, Apple additionally notes that the mention of an image sensor could translate to being a camera, including a night vision camera.

Apple's patent application that was published on Thursday by the U.S. Patent Office was filed back in Q3 2019. Considering that this is a patent application, the timing of such a product to market is unknown at this time.