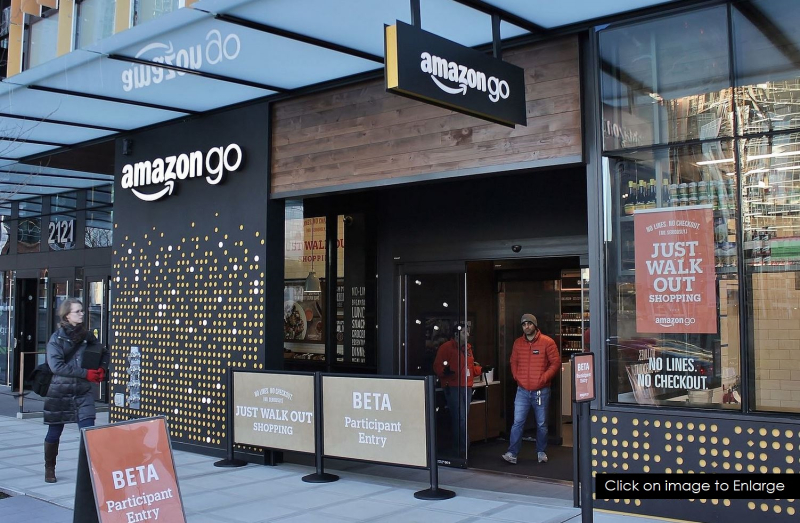 The U.S. Patent and Trademark Office filed for a patent for a non-contact Biometric ID System that could apply to future libraries, hospitals, offices and stores and more than likely their Amazon Go stores because one of the inventors is listed as Sora Kim, Hardware Engineering Manager at Amazon Go. Another inventor listed is Korwin Smith - Director, Software Development, Amazon Go and Amazon Books. An image of the Amazon Go store is presented as our cover graphic above and when you enlarge it you'll see a sign in the store window stating: "No lines. No Checkout. Just Walk out Shopping." 'Amazon Go' is a chain of convenience stores in the U.S. operated by Amazon. As of 2019, there are 18 stores open in Seattle, Chicago, San Francisco and New York City.

Amazon's patent application states that accurate and fast identification of a user provides useful information that may be used in a variety of ways. For example, entry to a material handling facility (facility), office, transportation facility, or other location may be controlled based on user identity.

In another example, information about the identity of the user may also be used to associate particular actions made by that particular user with an associated account.

Traditional systems for identifying users suffer from several significant drawbacks including susceptibility to fraud, speed, accuracy, and operational limitations. For example, a traditional system to identify a user by presenting a token, such as an identification card, may be used by someone other than an authorized user. As a result, systems that involve only the use of "something you have" are vulnerable to misuse.

Existing systems are also relatively slow to gather and process information. These and other factors result in existing systems being unsuitable for use in situations where rapid identification of users is called for without significantly impeding the flow of user traffic. For example, the delays introduced by existing systems would produce serious negative impacts such as delays at an entry to the facility which services tens of thousands of users in a given day.

Amazon's invention covers a system that provides for non-contact biometric identification of users. A scanner device is used to obtain raw images of a user's palm that is within a field of view of the scanner.

Amazon's Patent FIG. 1 below illustrates a system to identify a user at a facility; FIG. 8 illustrates a flow diagram of a process to rank and select a particular candidate user identifier based on rankings of sub-images. 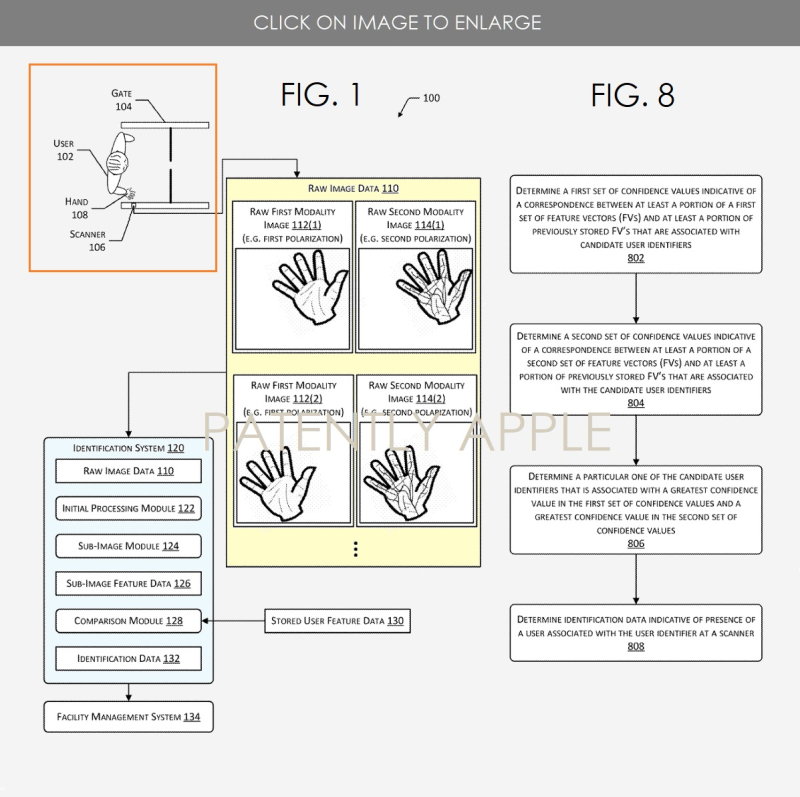 Amazon's patent FIG. 2 below illustrates implementations of a scanner used to acquire raw image data of a user's hand. 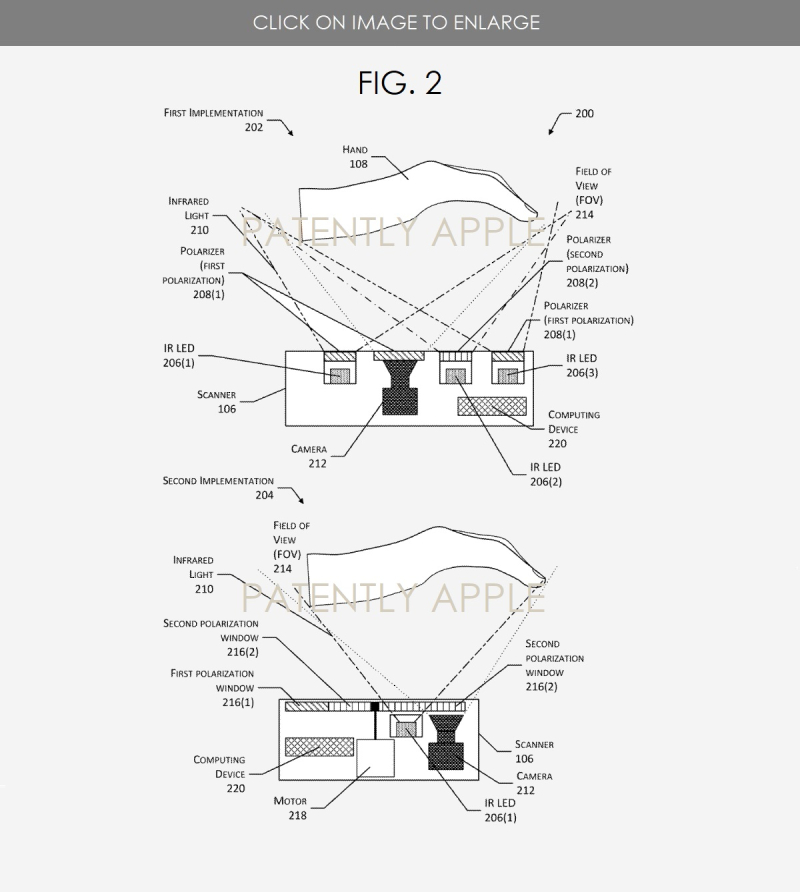 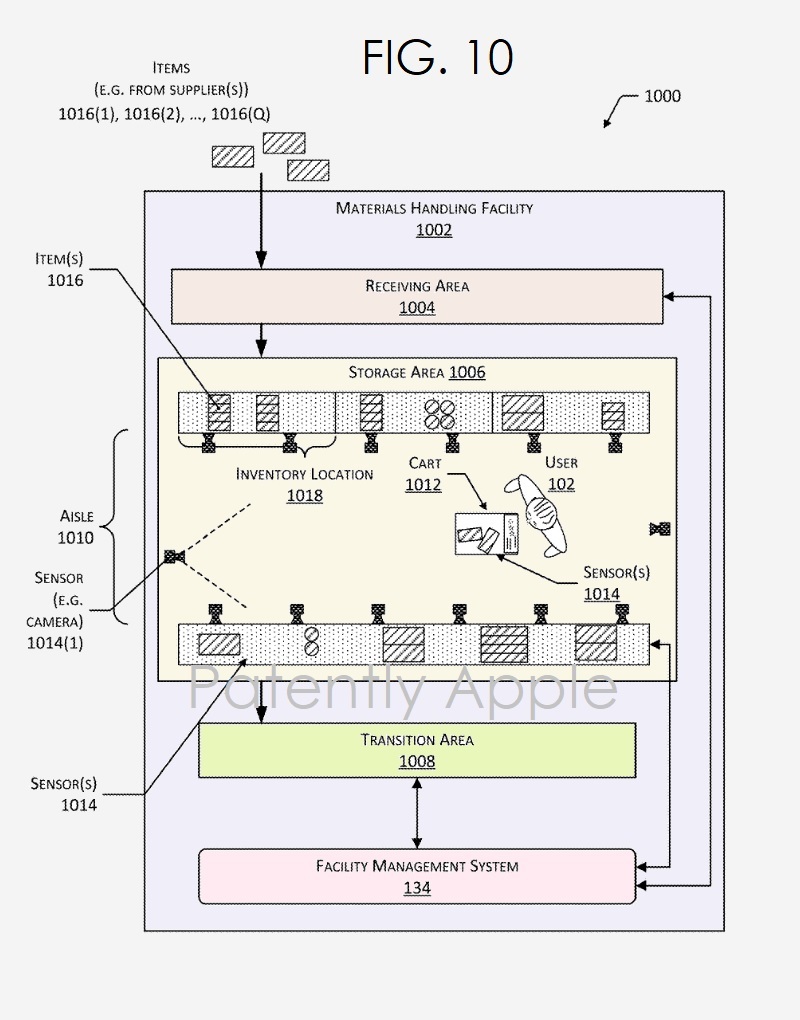 The U.S. Patent and Trademark Office published Amazon's patent application 20190392189 on December 26, 2019. Amazon originally filed the patent on June 21, 2018. To dive deeper into the details of this invention, click here.

Whether Apple will consider such a biometrics system for Apple Store in the future is unknown at this time. However, something similar would definitely be a deterrent to many of the hit and run robberies that Apple Stores experienced in the last two years (01 & 02).