Home Archives Contact Us Subscribe Twitter MeWe Facebook Patently Mobile
Rumor: Apple Plans to Launch a new High-End Mac in 2020 designed to address the Esports Market
Apple's iPhone XR was the Top Selling Smartphone in the World in Q3 while the iPhone 11 Zoomed to #5 in its first 10 days

Last Thursday the US Patent & Trademark Office published a patent application from Samsung that relates to a possible future Samsung smartphone that will have the ability to enlarge the display area of the phone to provide mobile TV shows and movies with a wider viewing area or the ability to displays more icons and/or apps on the display when in portrait mode. The patent supports a scrolling flexible display design. 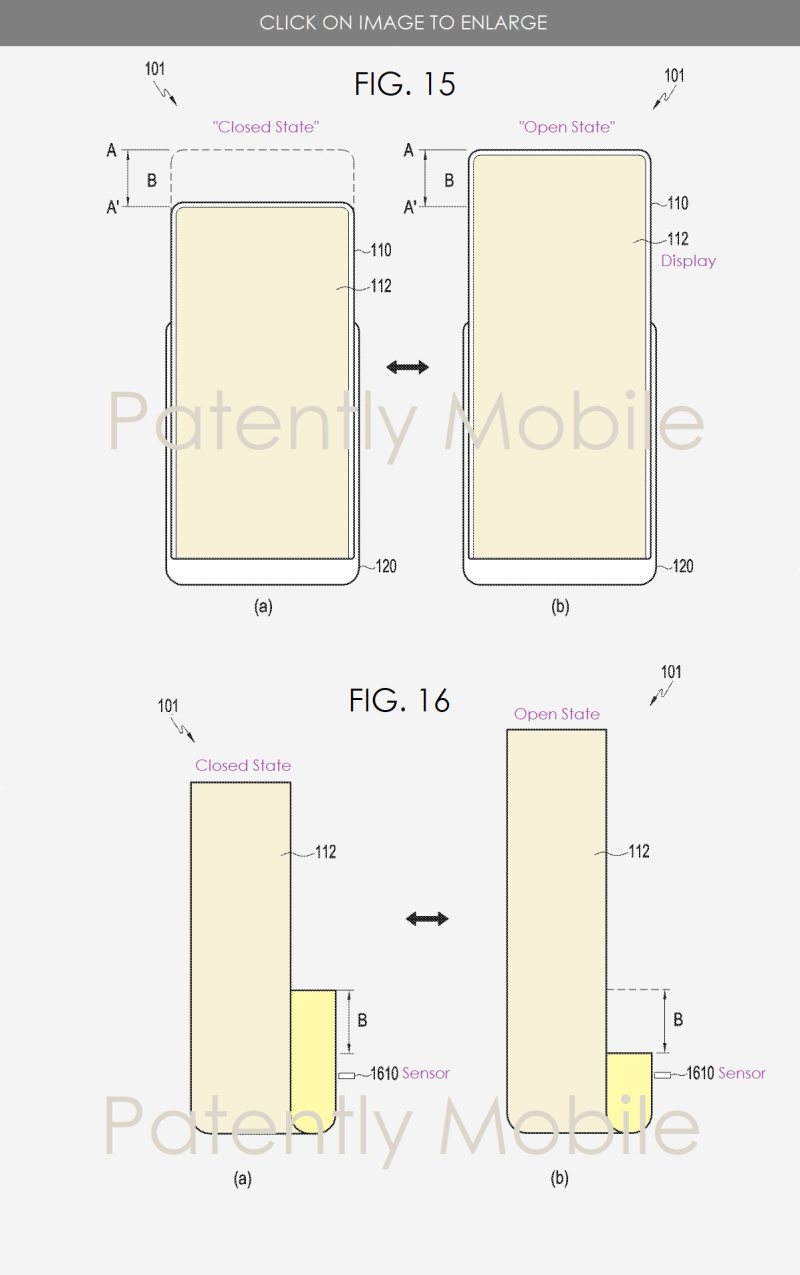 The first structure #110 of the smartphone can move between the closed state (a) and the open state (b) with regard to the second structure #120 in a first direction which is parallel with the second plate – increasing or decreasing the size display available to the user.

You'll note in patent FIGS 16a and 16b that the display itself can be scrolled in to shorten the display's height or rolled forward to increase th
e size of the display with the physical.

How will the user enlarge the display's height when needed? As Samsung's Patent figure 1C below illustrates, there's a moveable backside plate that the user will be able to manipulate with one of their fingers. 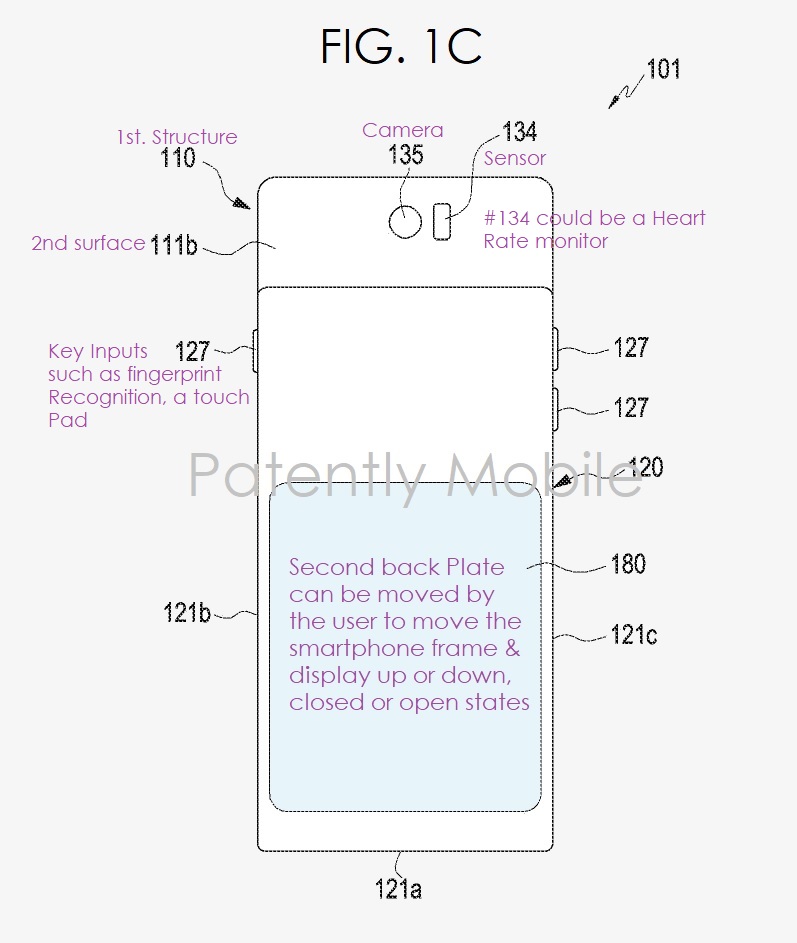 Samsung further notes that in the case of a rollable device having a display #112, at least a part of which is rolled in, a sensor #1610 (FIG. 16) may be arranged so as to enable touch recognition by a touch panel. When the user expands or contracts the display, it is possible to recognize a change in the touch input coordinate in real time through this sensor to calculate the degree of increase or decrease of the display screen size.

The expandable scrollable display will provide users with a taller and/or wider display image as illustrated in Samsung's patent figure 23 below. 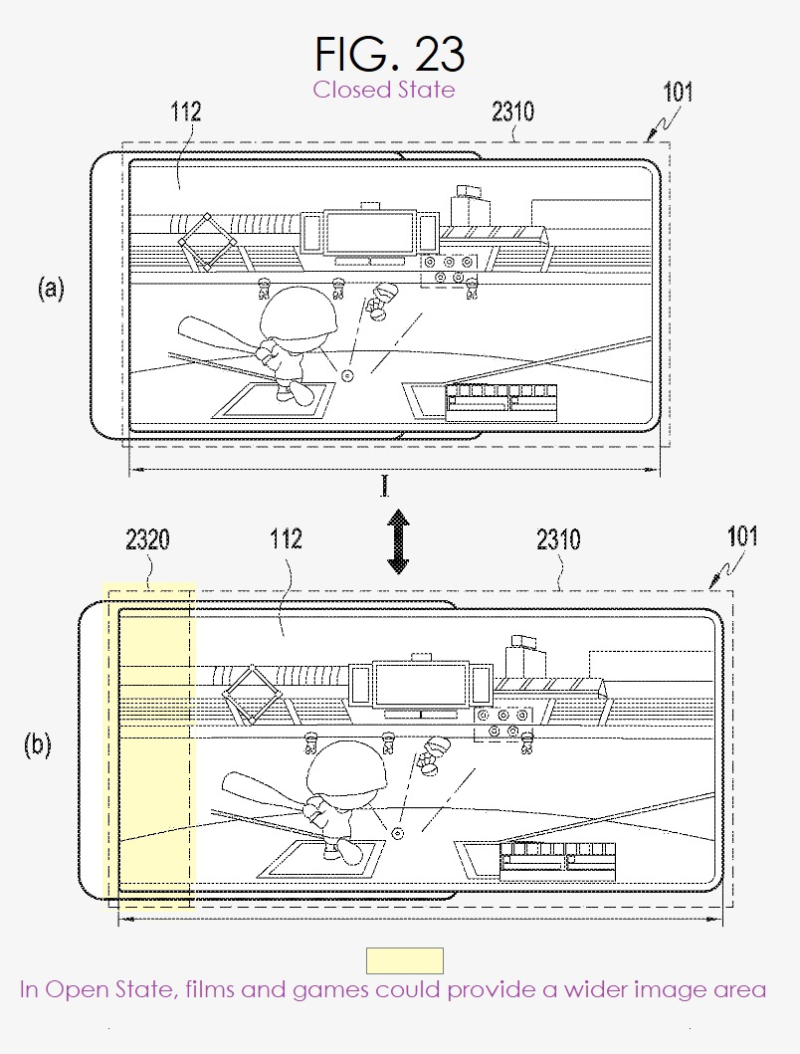 In today's smartphones, be it Samsung's Galaxy 10S or Apple's iPhone 11, there's a premium price for the added 0.7" to 1" larger models.

With this new design, Samsung could technically deliver one smartphone that offers multiple display sizes for one price or offer two smartphones with a wider variety of display sizes.  Either way it could provide Samsung with a competitive edge.

Like most major device makers, the concept is not limited to a smartphone and could be applied to future tablets, Head Mounted displays, a car display and so forth.