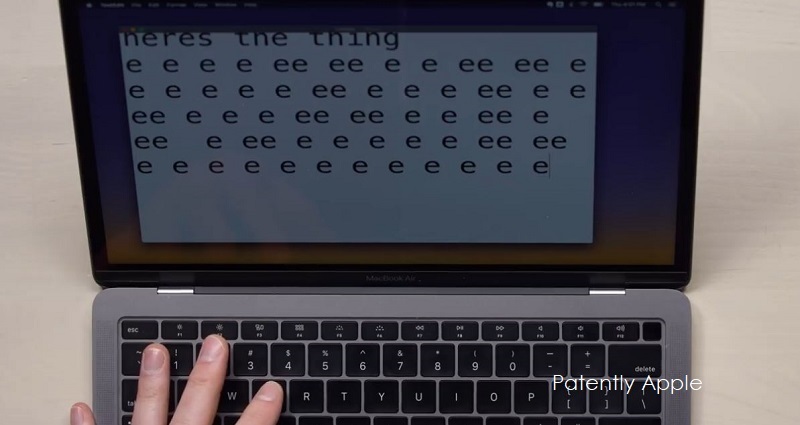 In March Patently Apple reported that "After a Decade using a MacBook Exclusively, Unbox Therapy's Host Dumps it for a Windows Laptop," due to the butterfly keyboard's never-ending problem with the "e" key repeating. 9to5Mac's writer Ben Lovejoy wrote about his problems with various stuck keys in April. In May Apple was hit by a series of lawsuits (01 and 02) on this issue of the butterfly keyboard being defective.

Knowing that the lawsuits were piling up, Apple decided to expand Keyboard repairs to newer models of MacBook and use 'New Materials' in the switch mechanism.

According to a Reuters report today, "A federal judge on Monday rejected Apple Inc’s bid to dismiss a proposed class action lawsuit by customers who said it knew and concealed how the "butterfly" keyboards on its MacBook laptop computers were prone to failure.

U.S. District Judge Edward Davila in San Jose, California said Apple must face claims that its troubleshooting program did not provide an "effective fix" for MacBook design defects, or fully compensate customers for their out-of-pocket expenses while seeking repairs.

Customers claimed that their MacBook, MacBook Pro and MacBook Air laptop keyboards suffered from sticky keys, unresponsive keys and keystrokes that failed to register when tiny amounts of dust or debris accumulated under or near keys.

They also said Apple’s service program was inadequate because the Cupertino, California-based company often provided replacement keyboards that had the same problems.

Apple replacing the butterfly keyboard in their latest MacBook Pro 16" model all but confirms that the butterfly keyboard was a failure for pros banging on it 10 to 15 hours a day. While only time will tell, It would seem difficult to see Apple wiggling out of this lawsuit, especially because of the commentary by the Judge.