Home Archives Contact Us Subscribe Twitter Facebook Patently Mobile
Suspicions are Rising that TikTok is a Spy tool for the Chinese Government as the U.S. Navy bans it as a Cybersecurity Threat
Rumor: Apple Plans to Launch a new High-End Mac in 2020 designed to address the Esports Market

In 2014 our secondary IP web site known as Patently Mobile posted a report titled "A Surprising Smartphone Patent from Facebook Surfaces with Multiple Twists." That was one of the first signs that Facebook was at least thinking of entering the smartphone market to take on U.S. rivals Apple and Google and possibly with a new operating system.

Since that time Facebook acquired Oculus to become one of the VR Headset leaders and in September of this year they entered the market with three new hardware products focused on video calling and augmented reality, doubling down on its voice assistant products that will compete with similar devices from Google and Amazon for an increased share of consumers’ attention.

As more hardware is on the horizon, it shouldn't be too much of a surprise that reports are claiming that Facebook has been working on a new operating system designed from scratch.

The new operating system was first reported on by "The Information" last week. The report claimed that Facebook was building its own operating-system software to decrease its future dependence on rivals like Apple Inc. and Google, owners of the world’s most popular mobile operating systems.

With Facebook having 2.4 billion active users, it's highly likely that introducing devices with their own OS could be viable. With that kind of a user base, developers could be tempted to support it once it's out – though history shows it could easily flop.

Facebook had sought ways to alleviate its dependence on Apple and Google for years. It previously tried to build its own mobile phone and developed a software layer to work on HTC handsets. Both projects failed.

Facebook also previously had a contingency plan in place, called Project Oxygen, in case its apps were ever blocked or inaccessible from the Google Play Store and Facebook had to ensure users could get them somewhere else.

Facebook, like Microsoft, may find out very quickly that it's difficult to win over Android developers to a new platform. Microsoft acquired Nokia to take on Apple and Google and that project blew up in their face. Microsoft will now be using an Android based OS for its upcoming folding phone (Surface Duo) and folding tablet (Surface Neo) in Q4 2019.

With that said, Facebook's planned operating system will reportedly be focused on both current and future products, such as augmented-reality glasses, according to a Facebook spokeswoman. Facebook has shared plans on a new pair of glasses that will carry its own operating system and social media apps. Critics think it could still be years away.

Andrew Bosworth, Facebook’s head of hardware told The Information news site that "We really want to make sure the next generation has space for us" referring to their future OS and added that "We don’t think we can trust the marketplace or competitors to ensure that’s the case. And so we’re going do it ourselves."

Some technology industry leaders, including Facebook Chief Executive Officer Mark Zuckerberg, believe that AR glasses could one day take the place of mobile phones as consumers’ primary way of connecting to the internet.

Back in September Patently Apple posted a report titled "While Facebook missed the Smartphone Revolution, they're now banking on Smart Glasses being the Next Great Device Trend." The report pointed to Facebook's "Project Orion" being designed to replace smartphones.

Lastly, The Information report noted that Facebook turned to former Microsoft Mark Lucovsky who co-authored Windows NT to build their new operating system from scratch.  He reportedly has been on this project for over 2 years now. Lucovsky states on his LinkedIn profile page, "Want to push the envelope in OS design? Come work with us." 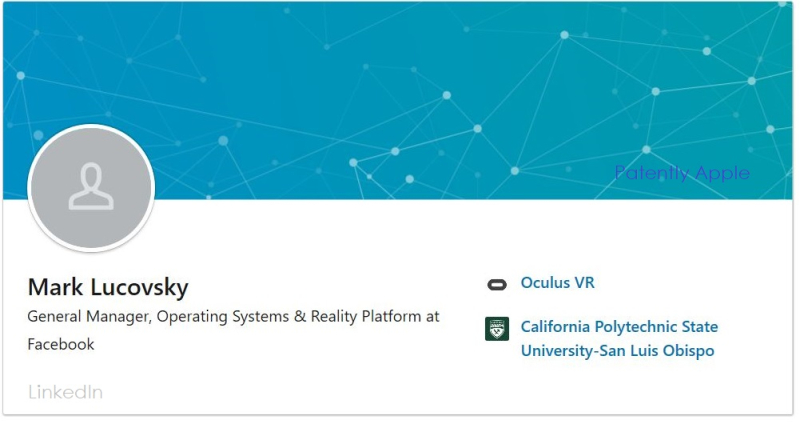