As Alphabet's Larry Page drifts into the background, Elizabeth Warren Reminds Page that he still has to go before Congress 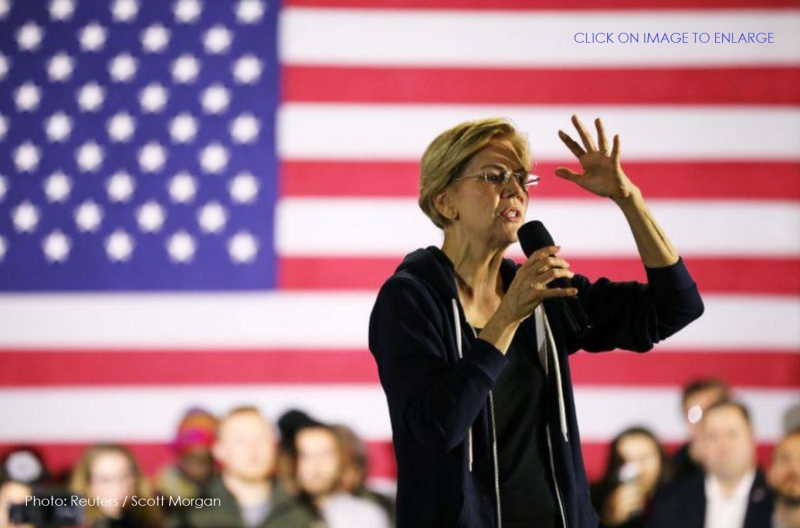 Earlier today Patently Apple posted a report titled "The New Bossman: Sundar Pichai is now CEO of Both Google and Alphabet as the Company Founders step down." As the co-founders slip further into the background and out of the public's eye, United States Senator made it very clear to Larry Page today – hold on, not so fast.

Reuters is reporting that "United States Senator Elizabeth Warren said on Wednesday that she still expects Larry Page to testify in Congress, a day after he stepped down as chief executive of Alphabet, Google’s parent company.

On one side of Warren's mouth she congratulated Larry Page before the other side of her mouth went on the attack by stating that "We do still expect you to testify before Congress."

Congrats on the move, Larry Page! Quick reminder: We do still expect you to testify before Congress. And changing your title while staying on the board and retaining effective control of it will not exempt you from accountability.https://t.co/Hr0w3Kz6zg

She added that while Google co-founder Page’s title may have changed, he is still a part of Alphabet’s board of directors and retains "effective control."

Reuters final word was that "Warren, vying for the Democratic nomination to take on President Donald Trump in November 2020, has vowed to break up Amazon.com Inc, Google and Facebook if elected to promote competition in the technology sector."

They failed to include Apple. Back in March we posted a report titled "If President, Elizabeth Warren will Force Apple to Choose between running their Platform or Store, but not Both."

Silicon Valley is on notice: Warren is not their friend if she wins her run for the White House.