Apple wins Patent for a Virtual Acoustics Audio System for MacBooks that will Greatly Enhance Audio for Games, Sports and TV+ 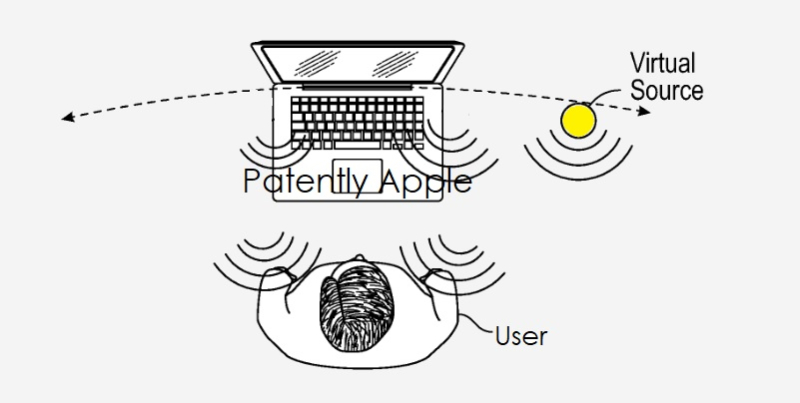 The U.S. Patent and Trademark Office officially published a series of 61 newly granted patents for Apple Inc. today. In this particular report we cover Apple's patent titled "System to move a virtual sound away from a listener using a crosstalk canceller." The patent covers an audio processing system for a future MacBook Pro with one or more processors that process an audio signal that is split into at least three paths. Audio signal processing for virtual acoustics can greatly enhance a movie, a sports event, a video game or other screen viewing experience, adding to the feeling of "being there".

In Apple's patent background they note that a virtual acoustic system is one that gives the user the illusion that sound is emanating from elsewhere in an indoor or outdoor space than directly from a loudspeaker (e.g., one that is placed in a room, one that is built into a laptop computer, etc. Audio signal processing for virtual acoustics can greatly enhance a movie, a sports even, a video game or other screen viewing experience, adding to the feeling of "being there."

Various known audio processing algorithms, executed by digital processors, modify one or more recorded, synthesized, mixed or otherwise produced digital audio signals in such a way as to position a virtual source according to modeling that is based on human perception of sound, including the role of ear acoustics, other reflecting and absorbing surfaces, distance and angle of source, and other factors.

In the case of headphones, specially processed audio signals (binaural rendering) are sent to left and right ears of a listener without the crosstalk that is inevitably received by the ears when listening to stereo loudspeakers.

For viewers and listeners that prefer loudspeakers, for example those that may be built into a laptop computer, a crosstalk canceller is employed in some virtual acoustic systems to produce sounds from multiple loudspeakers in such a way that for example a "left" audio signal is predominantly heard only at the left ear of the listener, and a "right" audio signal is predominantly heard only at the right ear of the listener (by virtue of sound wave cancellation in the air surrounding the listener.) This allows the left and right audio signals to contain spatial cues that enable a virtual sound to be "positioned" at a desired location between the loudspeakers.

Apple's invention covers an audio processing system with one or more processors that process an audio signal that is split into at least three paths (versus simple left and right speakers).  The first path has a direct gain and a direct virtual source algorithm operating on the audio signal.

Another aspect of the invention is a digital processor-based method for processing an audio signal, for example in preparation for playback through a left loudspeaker and a right loudspeaker. The audio signal represents a virtual sound source. 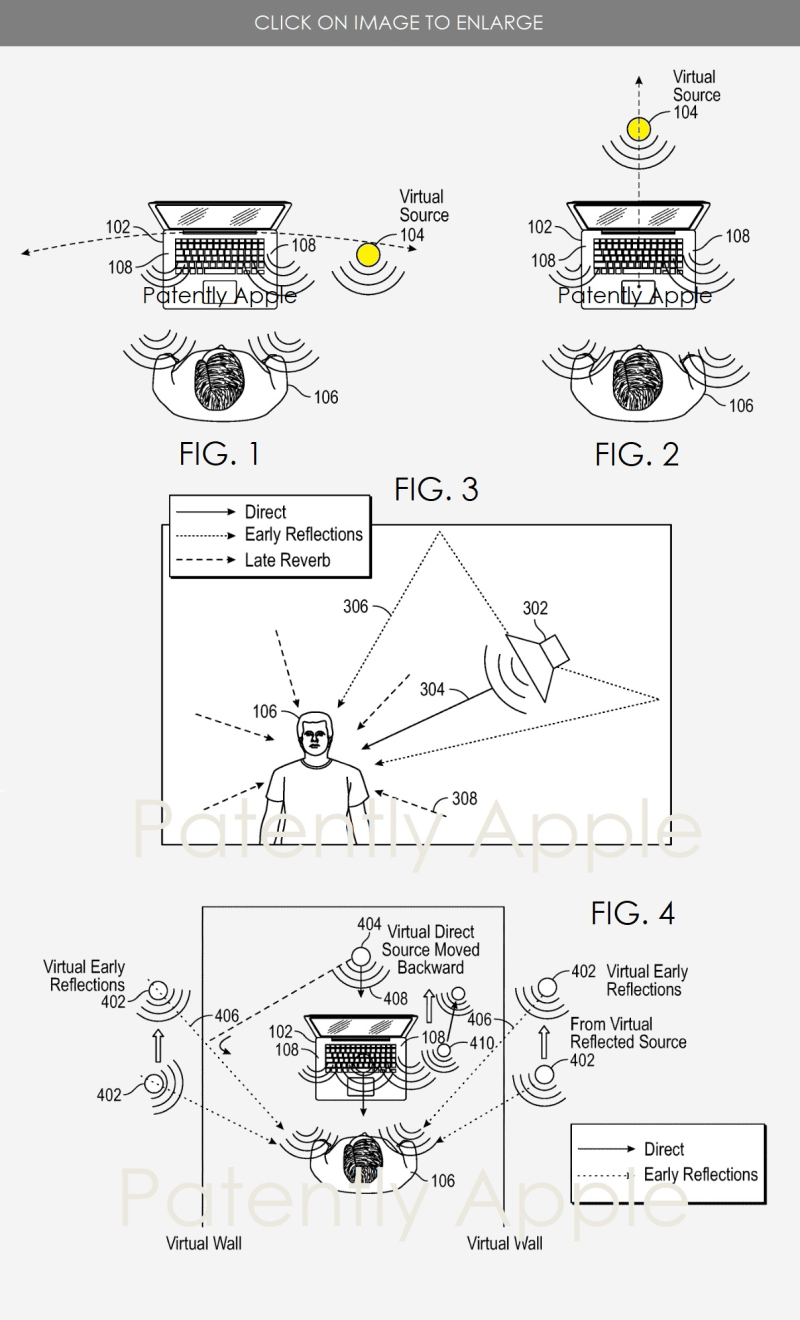 Apple's patent FIG. 3 above depicts three components of sound reaching a listener from a sound source, in this example a loudspeaker, the three components being direct sound, early reflections and reverberation (late reverb.); and FIG. 4 depicts a virtual direct source moved backwards, relative to the loudspeakers of a MacBook and the listener, and virtual early reflections of sound.

Apple's granted patent 10,524,080 was originally filed in Q2 2018 and published today by the US Patent and Trademark Office.