The U.S. Patent and Trademark Office officially published a series of 59 newly granted patents for Apple Inc. today. In this particular report we cover a patent relating to eye and head tracking system that could be used in context with playing games, but more importantly, the technology is used for advancing certain aspects of facial analysis relating to Face ID for iDevices, Macs and more.

Apple notes in their granted patent that it has recently been noted that three dimensional (3D) head tracking using a video sequence, or pose estimation using multiple images is an essential prerequisite for robust facial analysis and face recognition.

Eye tracking often forms the basis of these operations and may be thought of as the process of electronically locating the point of a person's gaze, or following and recording the movement of the person's point of gaze. In practice, eye tracking is provided by locating and tracking corneal reflections from an applied light source.

Apple's invention relates to systems, methods to detect and track a user's eye gaze and head movement. In general, techniques are disclosed for identifying a user's pupil location and using this information, in conjunction with a three dimensional (3D) model of the user's head, perform gaze tracking operations.

According to Apple, pupil location and gaze tracking operations may be performed by a desktop, laptop, notebook, tablet, smartphone or a gaming device.

A key part of this invention is about Face ID being able to capture a person's facial features and to be able to detect a user's eyes even through glare on glasses which is shown in patent figs. 7A and 7B below. 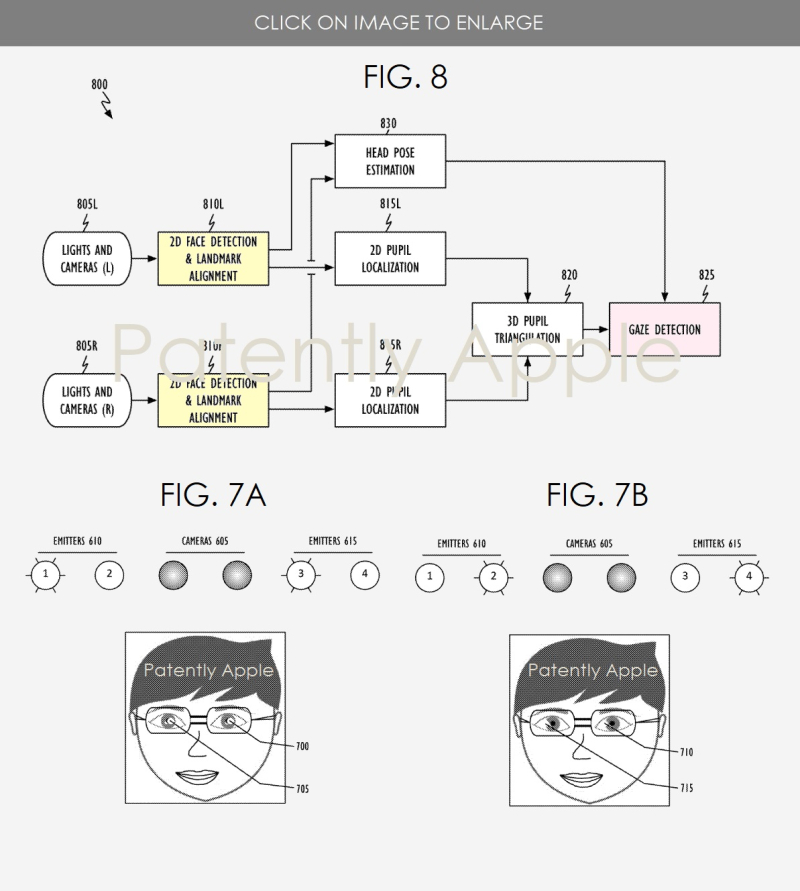 Apple's patent FIGS. 7A and 7B above illustrate pupil glare movement generated by the lighting and camera arrangement.