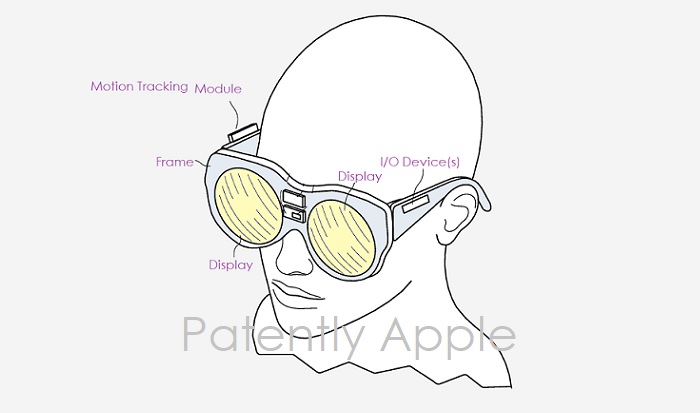 The U.S. Patent and Trademark Office officially published a series of 51 newly granted patents for Apple Inc. today. In this particular report we cover Apple's patent relating to headsets for gaming, vehicle simulators and other applications. Apple has worked on a few headset patents covering the need for accurate positional tracking and methods to avoid motion sickness while wearing a headset in a vehicle.

In March 2018 Patently Apple posted a report titled "Patent of the Decade: Apple Reveals an Unbelievable VR Experience System for Next-Gen Autonomous Vehicles." The patent was in context with a passenger in a future autonomous vehicle using a headset to both entertain and get work done.

In another patent report posted in June of this year, it discussed creating smoother CGI scenes for VR headsets that could eliminate Eye Strain and Nausea.

This is a trend in some of Apple's headset patents and today is no different. In fact the engineer behind this patent went down the rabbit hole and in great detail meticulously explained how playing games while riding in a vehicle could pose problems with conflicting motion between the real and virtual world environments that could lead to nausea. Today's patent is focused on headsets worn in vehicles and keeping the motion and inertia factors in balance.

Apple notes that Virtual reality (VR) allows users to experience and/or interact with an immersive artificial environment, such that the user feels as if they were physically in that environment. For example, virtual reality systems may display stereoscopic scenes to users in order to create an illusion of depth, and a computer may adjust the scene content in real-time to provide the illusion of the user moving within the scene.

Further, when the user views images through a virtual reality system, the user may feel as if they're moving within the scenes from a first-person point of view.

The simulated environments of virtual reality and/or the enhanced content of augmented reality may thus be utilized to provide an interactive user experience for multiple applications, such as interacting with virtual training environments, gaming, remotely controlling drones or other mechanical systems, viewing digital media content, interacting with the internet, or the like.

A similar phenomenon occurs in regard to angular motion. For example, a user wearing a conventional VR or AR device may be riding in a vehicle that turns, however the user may not actually turn their head when the vehicle turns. A conventional AR or VR device may not be able to separate the motion of the user's head (e.g. not turning) from the motion of the vehicle (e.g. turning).

Therefore, the turning motion of the vehicle may be attributed to the user and images displayed to the user on the VR or AR headset may appear to be turning or spinning despite the user not turning their head.

Such discrepancies between a user's relative motion within a vehicle and motion observed by the user via a scene displayed to the user may lead to nausea and sickness of the user. For example, nausea may be caused by oculovestibular mismatch (see).

Likewise, in the case of other types of devices that include IMUs, such as controllers, motion of a vehicle being attributed to the controller may lead to erratic control and unintended consequences.

Apple's invention in-part covers embodiments of a system, a head mounted display and methods that implement relative inertial measurement technology to determine relative motion of a user or a part of a user's body relative to a non-fixed reference frame, such as a vehicle in which the user is travelling.

In some embodiments, relative inertial measurement technology may be used to determine images to be displayed to a user via a head mounted display based on relative movements of the user's head while the user is travelling in a non-fixed reference frame, such as a vehicle.

In some embodiments, relative inertial measurement technology may be used with a controller coupled to a user's body to determine motion of the user's body relative to motion of a non-fixed reference frame in which the user is travelling, such as a moving vehicle.

Apple's patent FIG. 1 below illustrates a user riding in a vehicle and a system including multiple inertial measurement devices for determining relative motion of the user relative to the vehicle. 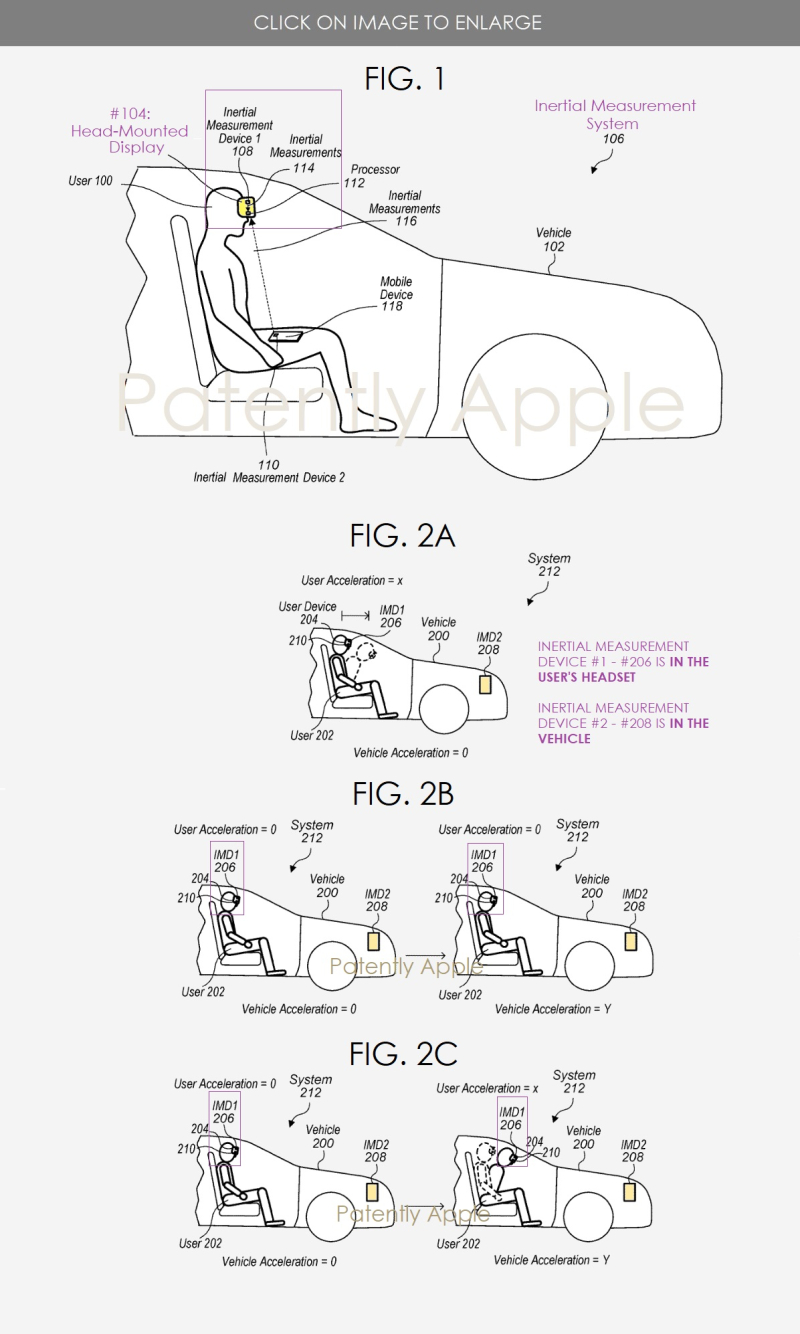 Apple's patent FIGS. 2A to 2C above illustrate examples of relative motion of a user relative to a vehicle reference frame.

Apple's patent FIGS. 3A-3C below illustrate examples of relative angular motion of a user relative to a vehicle reference frame 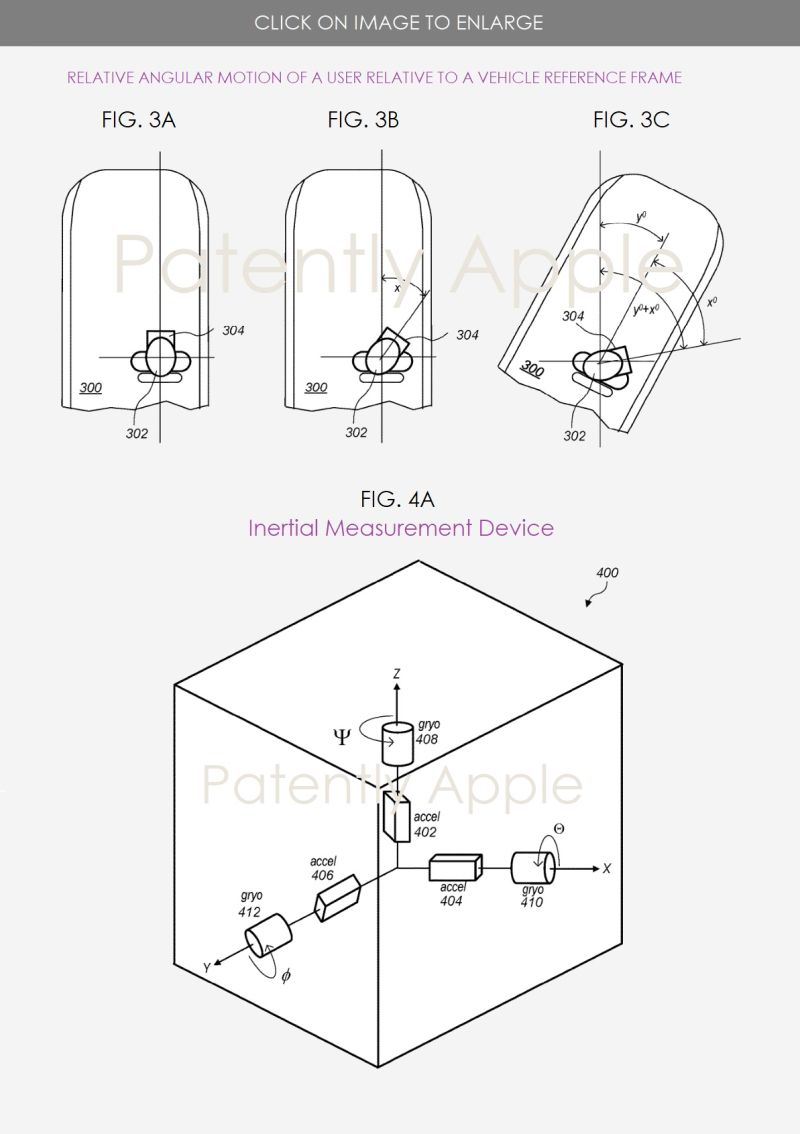 Apple's patent FIG. 4A above illustrates a block diagram of an example inertial measurement device. 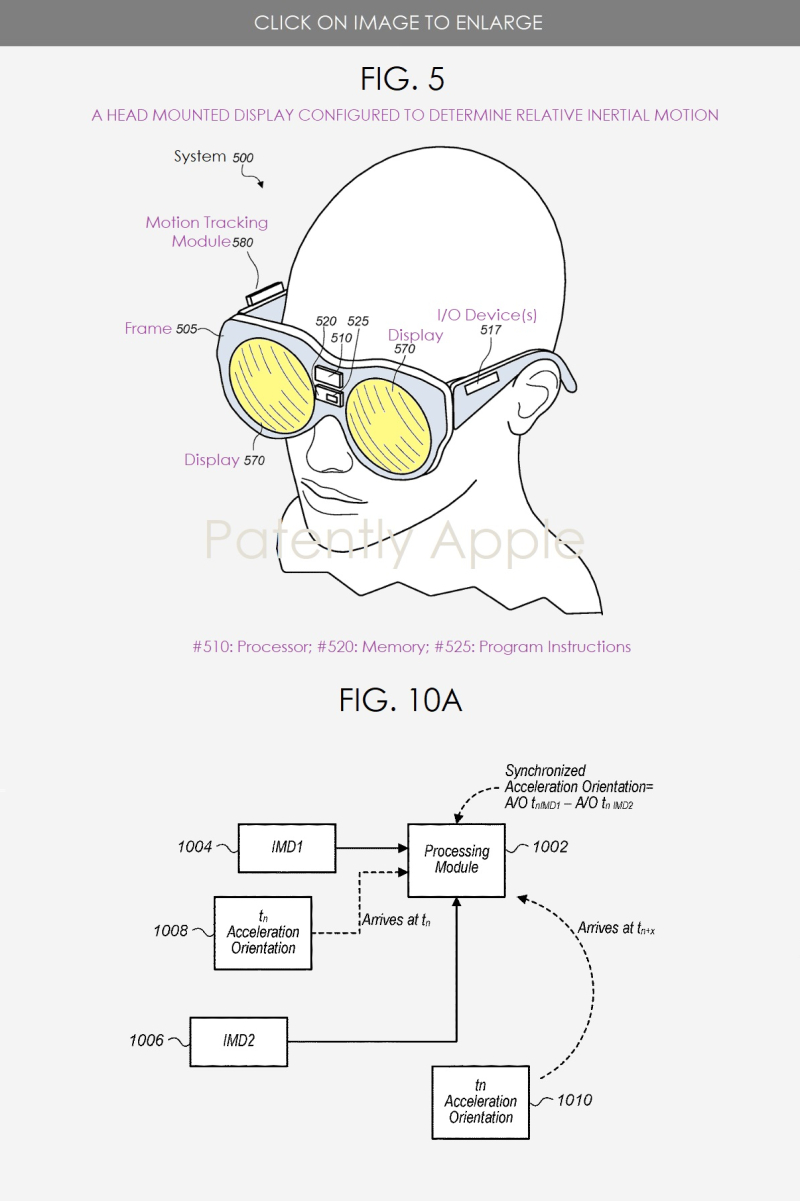 Apple's granted patent 10,503,245 was originally filed in Q3 2016 and published today by the US Patent and Trademark Office.

The inventor listed on the granted patent is 13 year veteran by the name of Fletcher Rothkopf that is Senior Director of Product Design, Technology Development Group.