Today the US Patent & Trademark Office published a patent application from Apple that relates to optical systems that include holographic optical elements and, more particularly, to optical systems for near-eye displays found in augmented or VR glasses (or headset).

Apple notes that it could be challenging to design near-eye displays for glasses or a headset. If care is not taken, some of the field of view produced by a near-eye display may not be viewable from a single eye position. This is one the areas that Apple's invention is to overcome.

Apple's invention covers AR and/or VR glasses or Head-Mounted (headset) with one or more near-eye displays that produce images for a user. The glasses or headset allows a viewer to view both computer-generated images and real-world objects in the viewer's surrounding environment.

The near-eye display may include a display unit that directs light and an optical system that redirects the light from the display unit towards a user's eyes.

The output coupler may redirect the light from the input coupler so that it exits the waveguide towards the user's eyes. The input and output couplers may be formed from holographic optical elements such as thin holograms, volume holograms, or surface relief gratings.

Apple's patent FIG. 1 below is illustrative system having a device with one or more near-eye display systems. The device could be a pair of glasses or a full Mixed Reality Headset.

In configurations in which system is a pair of augmented reality glasses, the display may be transparent and/or may be provided with optical mixers such as half-silvered mirrors to allow the viewer (#16) to simultaneously view images on the display and external objects such as object #18 in the surrounding environment. 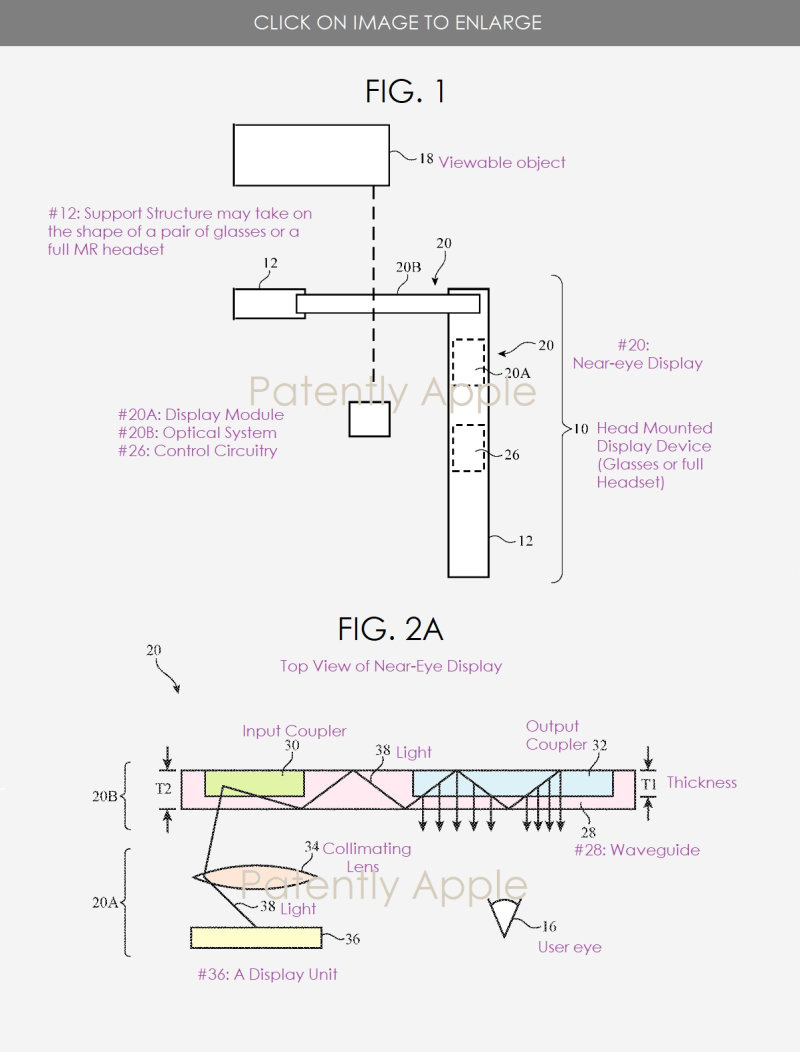 Apple's patent FIG. 2A above is a top view of an illustrative near-eye display system having an optical system including an input coupler and an output coupler at least partially embedded in a waveguide substrate.

As shown in FIG. 2A, the display could be LCD, OLED or a projector display (e.g., a projector based on an array of micromirrors),

Input coupler #30 and output coupler #32 may be based on reflective and refractive optics or may be based on holographic (e.g., diffractive) optics. In arrangements where both couplers are formed from reflective and refractive optics, the couplers may include one or more reflectors (e.g., an array of micromirrors or other reflectors). Holographic Elements are listed six times in Apple's patent claims showing the importance of this feature to this invention.

Apple's patent application 20190377181 that was published today by the U.S. Patent Office was filed back in Q3 2018. Considering that this is a patent application, the timing of such a product to market is unknown at this time.