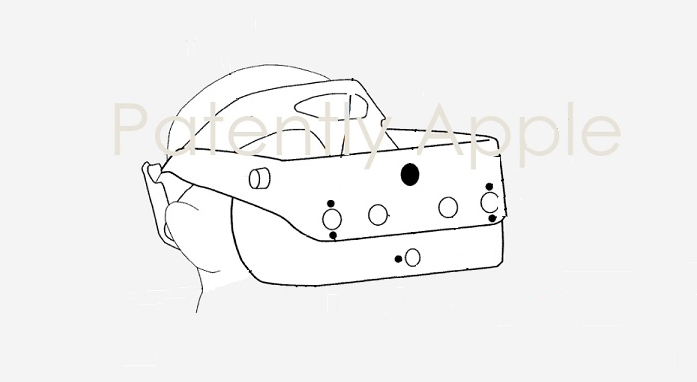 Today the US Patent & Trademark Office published two patent applications from Apple that relate to various aspects of future AR glasses or Mixed Reality headset. One patent shows Apple's continuing work on high-quality foveated displays that using eye-gaze control to save energy. The second patent covers future glasses or headset that could use an "Infrared Transparent One-Way Mirror" that can both hide a camera and your eyes from being seen by the public.

Today some AR glasses, like "Spectacles 3" from Snapchat that are merely a stepping stone toward true augmented reality eyewear as TechCrunch puts it, have exterior cameras on the frame which are aesthetically hideous as presented below.

Apple's invention describes the possible use of an infrared transparent one-way mirror to hide those cameras from being seen by the public.

In Apple's patent background they note that items such as sunglasses and ski goggles are sometimes provided with coatings that create a one-way mirror effect. When the sunglasses or ski goggles are being worn by a user, these coatings may obscure the user's eyes from view.

Challenges can arise when forming coatings to hide electronic device components. If care is not taken, coatings may not be sufficiently transparent to allow components to operate effectively or may not have a desired appearance.

The optical components may operate through the layer of material while being hidden from view by the reflective appearance of the infrared-transparent one way mirror.

Apple's patent FIG. 2 below is a top view of a Head Mounted Device (HMD) 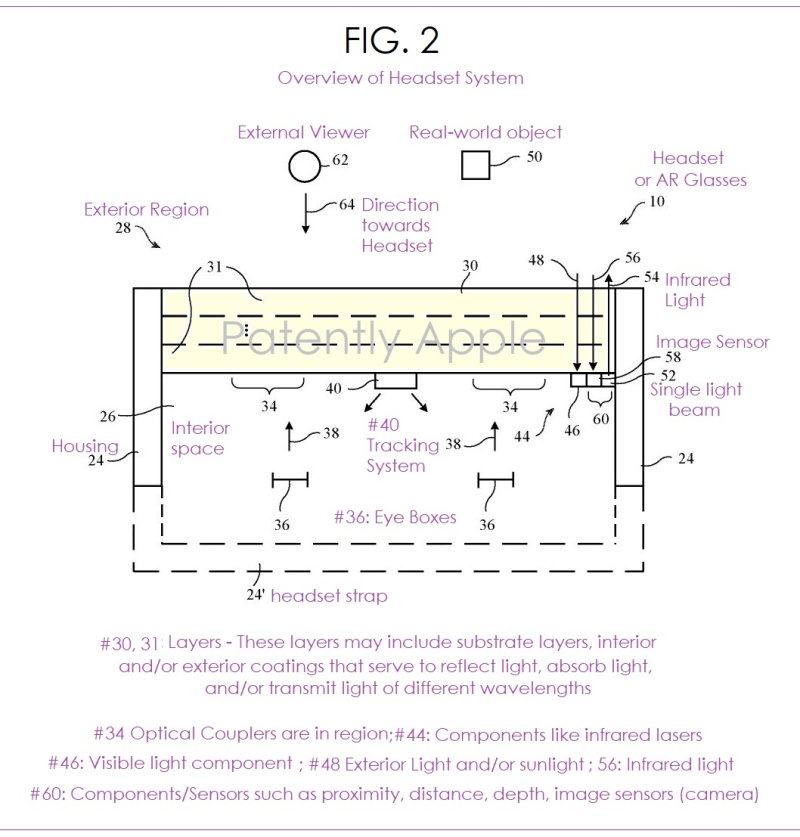 Apple notes that in patent FIG. 2 above, layer #30 may include one or more sub-layers such as layer #31. These layers may include substrate layers, interior and/or exterior coatings, coatings that serve to reflect light, absorb light, and/or transmit light of different wavelengths by desired amounts, and/or other materials.

Apple's patent application 20190353836 that was published today by the U.S. Patent Office was filed back in Q1 2019 with some contributing work being set in Q2 2018 by a provisional patent. Considering that this is a patent application, the timing of such a product to market is unknown at this time.

Over the last 20 months Patently Apple has posted 4 in-depth patent reports on the topic of foveated displays for a future Apple headset as presented below.

02: Apple wins a Patent for a Predictive, Foveated VR Headset

04: Apple's 8K Foveated Display Technology could apply to both Mini-Displays for a VR Headset & a Wall Mounted Display+

Apple's patent abstract: "An electronic device such as a head-mounted display or other display system may have a display. A gaze detection system may gather information on a user's point of gaze on the display. Based on the point-of-gaze information, control circuitry in the electronic device may produce image data for an image with multiple resolutions. A full-resolution area of the image overlaps the point of gaze. Lower resolution image areas are located in peripheral regions of the image."

Apple patent application 20190355332 is another piece of the foveated display puzzle that works with an advanced eye-tracking system and it's highly technical. If you wish to explore it further, check it out here.