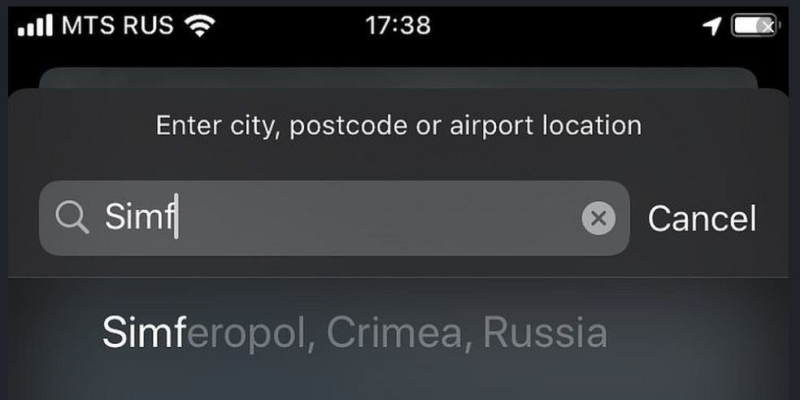 On Wednesday Patently Apple posted a report titled "Apple abides by Russian Law and Alters Maps and Weather Apps to reference Crimea and its Townsites as Russian Territory." Apple's decision to abide by Russian law about Crimea was bound to cause a stir with the Ukrainian Government and its iPhone fans locally and abroad.

Russia passed a law that pushed Apple to abide by or they would have been forced to leave the country. Politics aside, for Apple it was simply business by numbers. Ukraine has a population of 42 million and Russia has 147 million.

To push Apple even further, Apple will have to offer Russian alternative software on all iPhones, iPads and Macs starting July 2020. The South China Morning Post (SCMP) reported yesterday that "Apple has threatened to leave the Russian market over the law, since it does not sell phones with other companies’ software."

Hearing of Apple's position, the tabloid Komsomolskaya Pravda warned, "This could mean farewell to iPhones." While that may have made an interesting story line for a communist soap opera, Apple is likely to bow to Mother Russia's demands on the software issue as well.

As for their Crimea decision, the backlash continued. SCMP and the BBC reported that "Ukraine officials have lashed out at Apple for showing the annexed Crimea peninsula as part of Russia, saying the US tech giant did not "give a damn" about the pain of the Ukrainian people."

The report further noted that "The Ukrainian Embassy in the United States tweeted: "We guess Ukrainians [are] not giving any thanks to @Apple this #Thanksgiving!"

Other Ukrainians have responded by calling for a boycott of Apple devices. On Facebook, Igor Kravchuk from Kharkiv wrote: "Let’s take our gadgets onto the square, pile them up and burn them!"

Garry Kasparov's tweet read: "Apple changing its maps inside Russia to make Crimea part of Russia is a huge scandal. Regionalization of facts is unacceptable appeasement."

He added: "Software is soft power. American tech companies should stand up for the values of innovation that made their success possible, not bow down to dictators for a little extra cash they don't even need."

Another Facebook entry from Yevgen Petrov from Zhytomyr, stated: "Let’s boycott Apple and support Android, a creator of gadgets that don’t cave in to the Kremlin!"

While we can understand Apple fan anger in Ukraine, the fact that is that Google was the first to bow to Russia's demands earlier this year.

Making matters worse, Google reportedly told Russian authorities that it was an error on their part for having Crimea marked as part of Ukraine. That' wasn't just bowing to Mother Russia, that was kissing their A** by adding insult to injury.

Russia annexed Crimea from Ukraine in 2014 in a move condemned by most of the global community. The seizure of the peninsula helped spark a separatist uprising in eastern Ukraine that has claimed more than 13,000 lives. This is a very serious issue and very personal to the Ukrainian government, its citizens and beyond. The G8 suspended Russia for annexing Crimea.

At the end of the day, it's simply business by numbers and on that basis Russia won the day. Corporate values of Cupertino companies appear to not extend beyond the U.S. border.

You could read more on this from the BBC report here and The Independent here. CNBC added in one of their news videos that Apple's move has blurred the line on what is a fact. Ask yourself: How does it help anybody that now your internet spits out different facts depending on where you live and the political leaning of your" country's leader?

UPDATE Nov 30, 2019: Apple spokeswoman Trudy Muller told Reuters late on Friday that Apple is going to take a deeper look at how they handle disputed borders and may make changes in the future as a result.