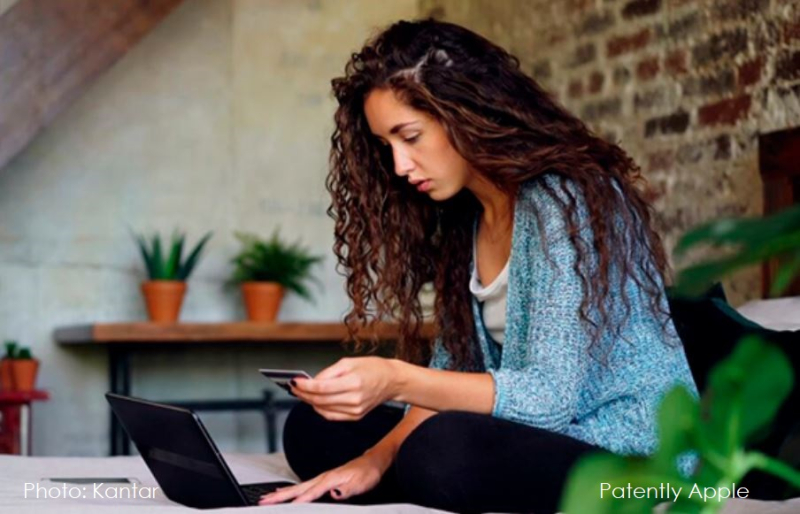 Last month Patently Apple posted a report titled "Another Day another EU Investigation into Apple's Business Practices. This time it's about the Restrictive Nature of Apple Pay."  The EU Antitrust Commissioner, Margrethe Vestager, attending the Web Summit tech conference in Lisbon, Portugal yesterday told reporters that "We get many, many concerns when it comes to Apple Pay for pure competition reasons."

Of course being that Apple has yet to be charged officially, the commissioner acted unprofessionally and irresponsibly by playing it up for the European media. Though it's now crystal clear that charges or fines will be announced against Apple shortly, shy of a last minute agreement reached with Apple.

While e-commerce is huge in the U.S. with Amazon, Apple and many others, the use of e-commerce in the European market appears to be growing in leaps and bounds  in the last few years, especially in France as focused on by a new Kantar report published today.

Understanding the growth of e-commerce in Europe and especially in France will provide us with at least a partial understanding as to why this is a pressing issue with the European Antitrust commission.

According to a new report by Kantar, 69% of French people aged 18 and over make an annual average of 19 orders of a physical product on the internet, worth an average amount of €57 (year to September 2018).

In total, this online expenditure represents over 660 million orders, generating turnover of €38 billion. In other words, for physical goods excluding travel, this means equivalent growth of 14% year-on-year.

Amazon is the absolute number one when it comes to e-commerce in France, with a market share of 17.5% for physical goods.

With specific data from Kantar we learn that with €6.5 billion of purchases made this year, Amazon remains the most widely known general e-commerce site in France. It is very popular with its customers, winning their trust and ensuring their satisfaction, both through its services and the great choice of products on offer on the site.

Kantar further noted in their report that "Just three sectors represent over 50% of the online mass consumption purchases of French people: food in the broadest sense, multimedia and fashion." For more details on this, read the full Kantar report.

Unfortunately Kantar's report failed to explain what's included in the multimedia sector. We can figure that this is likely an important e-commerce segment for Apple and why the EU is paying attention to Apple on this issue.

With Apple Music, Apple Arcade and Apple TV+ services, to name but a few, e-commerce numbers will be huge and growing annually. Apple's CEO has been pounding the table to get Wall Street to understand that services is the next big profit maker for Apple which has certainly drawn the attention of the European Antitrust Commission.

With Apple's iPhones being very popular in Western Europe, it's almost a given that Apple fans will eventually gravitate towards using Apple Pay for making payment for these services.

This is where European businesses and banks are complaining against Apple. They're insisting that Apple is making it difficult if not impossible to have European customers register alternative cards in Apple's Wallet app.

Without having testimonials from regular Apple fans in Europe, I have no way of understanding or confirming if Apple is actually dragging their feet with alternative cards being recognized for Apple Wallet or if the complaints are being fabricated, exaggerated and or manipulated by the EU commission to make their case.

In the end we'll have to wait for the investigation's findings before judging, though Vestager's comment this week in Portugal against Apple suggests that they have found sufficient grounds to fine Apple. Well, at least to their satisfaction.

At some point in time the U.S. government will have to return the favor and begin to raise tariffs substantially on European cars and wines coming into the U.S. because Europe is using their Antitrust Commission to hit the U.S. with another form of tariffs. That, of course, is an argument for another day.

In respect to the EU's case against Apple, stay tuned as this story is bound to be back in the headlines in the not-too-distant future.