At times a patent will reveal what might be coming down the pike or cover details about services and/or products that were recently released. Lastly, patents could play a part in a company's R&D so as to protect possible new features and products. On Thursday the US Patent & Trademark Office published Apple's patent application for Screen Time that was first revealed during Apple's WWDC 2018 keynote and added to iOS 12 with new iPhones in September 2018.

In early June 2018 Patently Apple posted a report titled "Apple Addresses iDevice Addiction with Promised App Called 'Screen Time' that lets Parents Set Time Allowances & more." Big shareholders were pressing Apple to do something in regards to this out of control addition back in January 2018 and Apple began work on it shortly after according to the dates on the patent filing.

Apple introduced "Screen Time" during their WWDC 2018 keynote at the 47:56 minute mark. We didn't include the video in this report simply because Apple is claiming Copyrights to it and blocking anyone, including Apple blogs, from using their keynote video.

Apple's patent application which is titled "User interfaces for controlling or presenting device usage on an electronic device" was filed in September 2018.

Apple's patent FIGS. 6A and 6S presented below illustrate just a couple of the exemplary ways in which the iPhone was designed to provide users with indications of usage metrics. 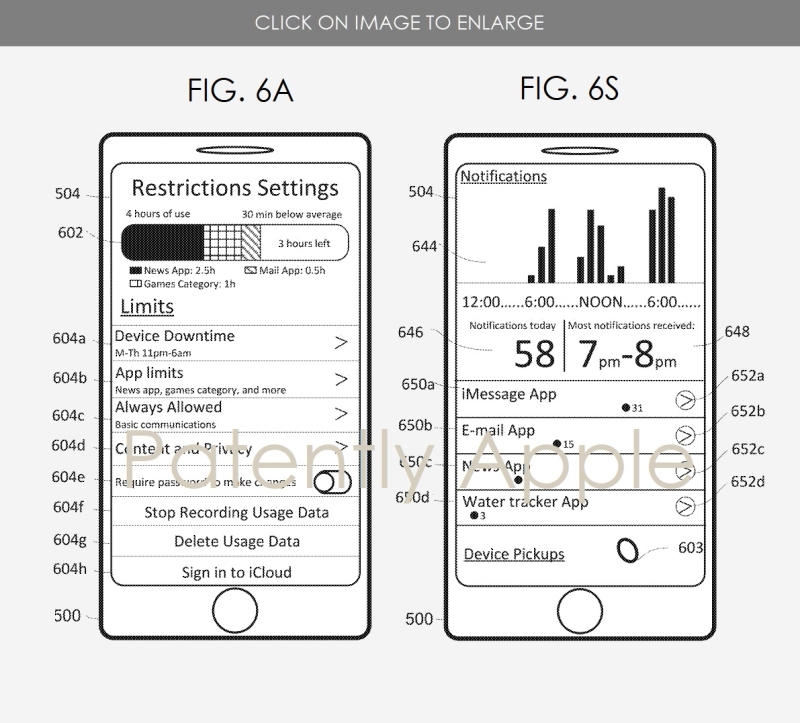 Although it may look like a simple app to consumers, it is mind boggling to see the length and depth of Apple's patent filing that you could review here in full.

Obviously Apple took the concerns of their shareholders quite seriously on this particular matter and delivered one of the best apps for monitoring a user's time online to assist parents.

Whether the app has actually assisted parents as once hoped for or has changed the online behavior of adults is unknown at this time as there's no known study on this matter since Apple released their app. For now, the "hot issue" is now a cold one with Apple's release of Screen Time.